Russian military police began joint patrols with Turkish forces near the Syrian-Turkish border as part of an agreement under which Kurdish fighters would withdraw from the area. 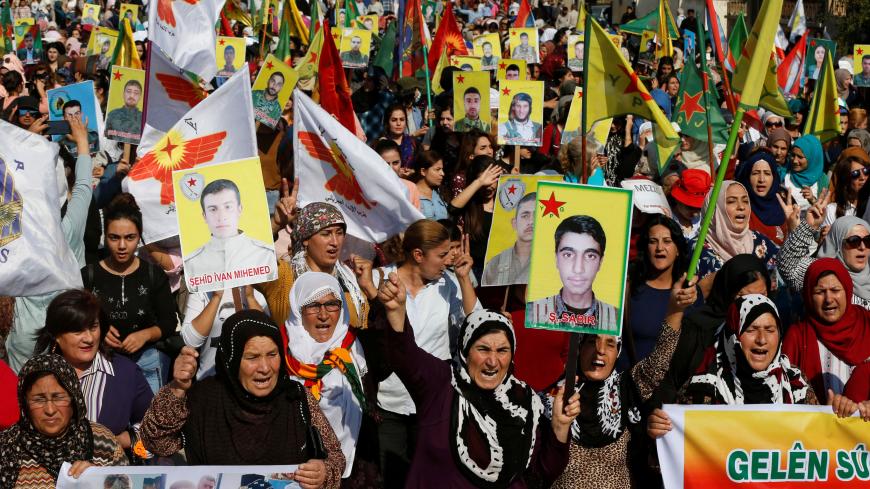 Kurdish and Arab protesters chant slogans against Turkish President Recep Tayyip Erdogan as they walk during a march to the United Nations headquarters in the town of Qamishli, Syria, Oct. 23, 2019. - REUTERS/Muhammad Hamed

The process needed to be completed within 150 hours, after which joint Turkish and Russian patrols would begin operating west and east of the area of ​​Operation Peace Spring at a depth of 10 kilometers (6 miles), with the exception of the city of Qamishli due to the presence of the Syrian regime’s security forces there.

The SDF withdrew from a number of neighborhoods in the cities of Ras al-Ain north of Hasakah and Tell Abyad north of Raqqa as part of the Russian-Turkish agreement to stop the Turkish military operation in northeastern Syria. Turkey announced Oct. 23 that there was “no need” to resume its offensive against Kurdish fighters in northeastern Syria after the truce ended, noting that the United States had informed it that the withdrawal of Kurdish forces from the border areas had been “completed.” The Turkish Defense Ministry released a statement saying, “At this stage, there is no need to carry out a new operation.”

A video showed a Russian military police patrol in Amuda on the Syrian-Turkish border.

In cooperation with Syrian government troops, Russian forces began to advance toward all areas where fighting between the SDF and Turkish forces took place. A video documented the moment Syrian soldiers arrived at Tall Tamr, while other Syrian army units arrived in areas from the countryside of Ras al-Ain (Sri Canet) to Amuda, only to be stationed at the border strip without entering the city centers.

On Oct. 27, clashes erupted between the Syrian army and Turkish forces in the rural area around Ras al-Ain in northern Syria on the Turkish border and continued until Oct. 30.

Hussein Azzam, head of the autonomous administration’s legislative council, told Al-Monitor that he regrets the lack of positive outcome from the Russian-Turkish agreement.

“There is no reassurance so far. When we agreed to the Russian-Turkish agreement, despite our reservations on some items, there were Russian guarantees, but there was no such thing. The Turkish attacks are ongoing and more areas are being occupied,” he said.

Speaking about the absence of representatives from the area over which international agreements are being concluded, Azzam noted, “The agreements are either sponsored by the United States or Russia and they are the main players in this field and each of them wants to help us, but prioritize their personal interests first.”

He explained that the need is pushing them to ask for and accept help, adding, “The Turkish forces and their accompanying mercenaries make us inclined to ask for help from international powers. Unfortunately we have not found a true ally at this time.”

Speaking about the nature of the issues they were skeptical of, Azzam said, “The SDF had reservations on some items and this is a military matter whose details we are still unaware of. An SDF statement noted that they accepted the cease-fire with Russian guarantees to avoid further bloodshed and the scourge of war.”

Ahmed Suleiman, a member of the political bureau of the Kurdish Progressive Democratic Party, told Al-Monitor about the importance of these agreements and their direct impact on the lives of the people and components of the area, in terms of achieving safety and calm in the area after the Russian-Turkish agreement.

“So far no joint patrols have been carried out. Only Russian patrols were deployed and Syrian forces in the border posts. This is why there have been increasing concerns about the seriousness of the Russian-Turkish agreement, particularly amid the ongoing battles in the countryside of Ras al-Ain and its extension to the areas of [Tall] Abu Rasin and near Tall Tamr, especially the clash with the Syrian forces and the absence of any Russian action or stance,” he said.

Suleiman regrets the absence of the Syrians from the international conventions regarding their fate. “All agreements take place in the absence of Syrians, even the Syrian government does not participate in drafting these agreements. This applies to the region and the forces in it, which is further proof that decisions regarding the Syrian situation are in the hands of the international and regional powers involved in the Syrian affairs.”

Assyrian activist Gandhi Saadou told Al-Monitor, “In general the presence of any foreign force on Syrian territory does not serve the religious and national components. There is great international military intervention in the region, especially on Russia’s part, which attempted to impose its control on the border between Turkey and Syria. But Russia’s control remains weak there and does not have any significant political or military weight with which it can protect the region from Turkish intervention. In Afrin, for instance, Russia withdrew and failed to protect civilians from Turkish-[backed] forces taking over in 2018.”

Independent Kurdish politician Akram Hussein told Al-Monitor, “Now, after the SDF withdrawal and noninterference of the Russian side in the villages of Tall Tamr and Darbasiyah, the SDF should pressure the United States to intervene to stop Turkish military operations and reduce displacement or the SDF could withdraw its troops from Raqqa and Deir ez-Zor, and defend what is left of the Kurdish region and work to develop a unified Kurdish position.”

A teacher told Al-Monitor on condition of anonymity, “Everyone sold us and we are nothing but fuel for the bazaars of others. Every person who does not carry a Syrian identity needs to leave. I wonder why the SDF would go into a war with Turkey if it is aware that it lacks the capabilities to fight it. I wonder how it could risk all this bloodshed and losses. The United States withdrew and Russia failed to keep its promise to protect us. We can only pray to God now and wait for our imminent death.”