While it has added some fortifications, Moscow is challenged with new political and military uncertainty over Syria's northeast. 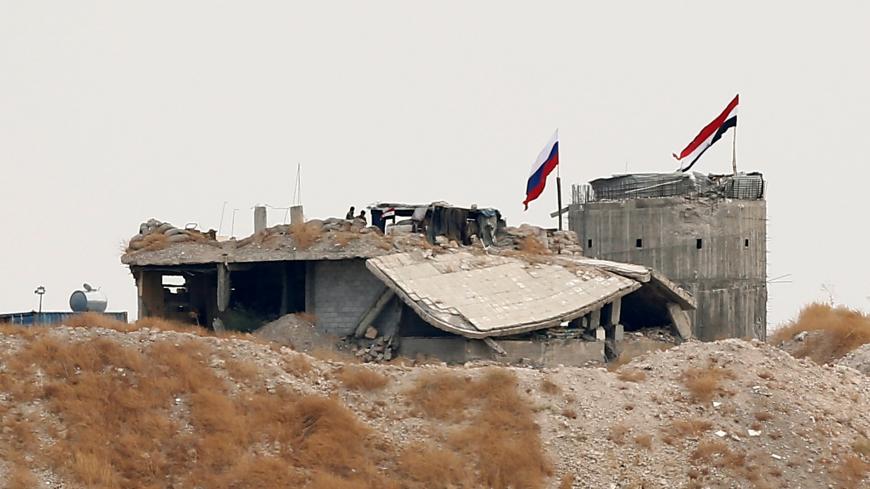 Russian and Syrian national flags are pictured near the northern Syrian village of Zor Magar, as seen from the Turkish border town of Karkamis in Gaziantep province, Turkey, Oct. 23, 2019. - REUTERS/Huseyin Aldemir

On Nov. 15, Russian military police were reported to have taken control of the Metras military airfield in the vicinity of Sarrin, 30 kilometers (19 miles) south of Kobani, officially known as Ain al-Arab. The air base is located far to the west of the oilfields that the United States had promised to shield from Islamic State, Russian and Assad forces. Until recently the airfield was used by American troops who could monitor and keep track of ground lines of communications stretching to the Syrian-Turkish border, which supply pro-Assad and Russian forces, deployed between Ain al-Arab and Tell Abyad. Hence, the takeover of the base vacated by the United States was painted by Russia’s mass media as a significant achievement. A more critical assessment, however, suggests the Russian operation is still fraught with many new risks.

Russia is also enjoying the use of two former US bases in Manbij and Tabqa, and the Russian military police takeover of the Sarrin base, allowing Russian-backed forces to dominate part of the strategic M4 highway, raises speculation about whether this was a product of some kind of US-Russia agreement. After the United States abandoned the Sarrin base in late October, it remained unoccupied for a while. On Nov. 1 the base saw a return of US troops, with the alleged aim of using the airfield to deliver supplies needed to establish new military footholds in eastern Syria. Then US troops left the facility again shortly before the Russian military police arrived at the site.

The United States keeps monitoring the situation in northeastern Syria, considering it possible to hand over other facilities or territories to other actors, including Russia and Turkey. However, if required, the Americans may reoccupy some bases, thus rebuilding their presence on the ground. At a regional level, this makes Russian troops and their Syrian allies vulnerable to and dependent on — to a certain extent — the United States.

Three Russian military police units — together with Turkish forces — are tasked with patrolling the entire border area to a depth of 10 kilometers (6 miles) east and west of the Turkish safe zone. Yet they lack proper air cover, making Russian and Russia-aligned Syrian forces on the ground vulnerable to various kinds of provocations and possible clashes with local groups, both pro-Turkish and Kurdish ones. The major deterrent for such groups is the threat of air power.

While attack helicopters have landed in Qamishli, their operational area is confined to the strip along the border jointly patrolled by Russia and Turkey. At the same time, it still rests with the Americans to decide for whom to open the airspace over the country’s northeast.

In northeastern Syria, it may be that Russia can only reliably count on the military base in Qamishli. This is possible thanks to the city’s special status, as much of Qamishli and the airport have been under the uninterrupted control of pro-regime forces throughout the civil war. Therefore, Qamishli is not covered either by US-Turkish or Russian-Turkish agreements on the Syrian-Turkish border and will not see joint Russian-Turkish patrolling. As for the Russian attack helicopters on the ground there, their deployment did not require any approval from other stakeholders.

However, rumors about Qamishli being a full-fledged, long-term air base are baseless. The move is ill-advised until Russia’s air forces have the opportunity to freely operate in what are now US-patrolled skies over northeastern Syria. For the moment, the deployment of Russian military infrastructure in the city is instrumental for conducting joint operations with Turkey aimed at patrolling the border strip. Other facilities along the border, including roadblocks established by the regime, are temporary and cannot assist the Russian military police in their efforts to control border territories.

Certain difficulties involving the use of highways to supply both Russian patrols stationed a ways from Qamishli and Syrian troop checkpoints aggravate the situation. In particular, the United States continues its military convoys in the border zone, for example, around al-Malikiyah, where Syrian border guards were to be deployed. US convoys were also seen on the M4 highway, Syria’s main artery used for dispatching forces and cargo for the Russian military police and regime forces operating along the border.

While the US military has vacated the air base located along the motorway in Sarrin, it is still premature — given the situation on the ground — to claim that Syrian troops and Russian security forces can see themselves in the driver's seat in the country’s northeast and even in the 30-kilometer zone from which the Sochi memorandum obliges the Syrian Democratic Forces (SDF) to withdraw. Until an agreement is reached and President Bashar al-Assad’s civil and military administration takes over full control over the 30-kilometer border security zone, with Damascus assuming complete control of the M4 highway, the Russian and Syrian government troops will have little confidence regarding their presence in the area and the US forces will remain well-placed to monitor the movements of government forces and traffic flows.

Moreover, the threat is still looming that we may see new hot spots and direct clashes between the Turkish-backed National Army and Assad’s army, as is already the case around Tell Tamr. There has been bitter fighting over some disputed areas to the north of the town. Assad’s forces and SDF units joined hands against the National Army forces in the area, which could put Turkish artillery and aviation and the Syrian government forces in jeopardy. The Turkish air forces were reported to have attacked Kurds there. The positions of the Turkish troops and the National Army look relatively stable in this area as they bank on Turkey's proximity. They can quickly get the necessary supplies and artillery support without the need to deploy artillery batteries in Syria.

On Nov. 20, Russia’s Foreign Minister Sergey Lavrov said Ankara had assured Moscow that Turkey was not seeking a new military operation in Syria despite earlier comments by Turkish Foreign Minister Mevlut Cavusoglu. On Nov. 18, Cavusoglu said Turkey may launch a new military offensive in northeastern Syria if the area not cleared of the SDF's People's Protection Units, which Ankara deems to be a terrorist group.

Nevertheless, the existing issues can be tackled in full regardless of the difficulties. The Russian military has gained sufficient expertise in working in Syria. It involves establishing contacts with various rival factions to address the problems arising as work progresses. For example, groups of Kurdish youths have thrown stones at the patrols and engaged in other provocations. Moreover, the Russian troops maintain contact with Turkish and American counterparts to avert possible incidents.

In the meantime, Damascus is displeased to see most region-related issues resolved by Moscow, Ankara and Washington, bypassing the government. The fighting near Tell Tamr, in which Assad’s army is engaged, can in a way be seen as the regime’s initiative, not Russia's. Indeed, one can expect the regime to take more such steps that may undermine Russia's overall plans for the region. Also, if the United States sustains its military presence on the ground, contrary to Trump’s earlier statements about the withdrawal, Assad’s success in the east will be far more modest than expected. It will also stand in the way of the Damascus-SDF dialogue, which Moscow has been counting on.

On the whole, the landscape is transforming in the east, which will affect the Syrian conflict. Every decision will have to be agreed on by the three parties — Russia, the United States and Turkey. Yet the presence of all three in the Syrian northeast is fraught with additional risks given the parties lack of a platform for trilateral discussion of the problems that may arise in this region. Such a platform is long overdue.