US forces have been preventing Russian patrols from advancing along the M4 highway and around al-Malikiyya in northeastern Syria near the Turkish and Iraqi borders. 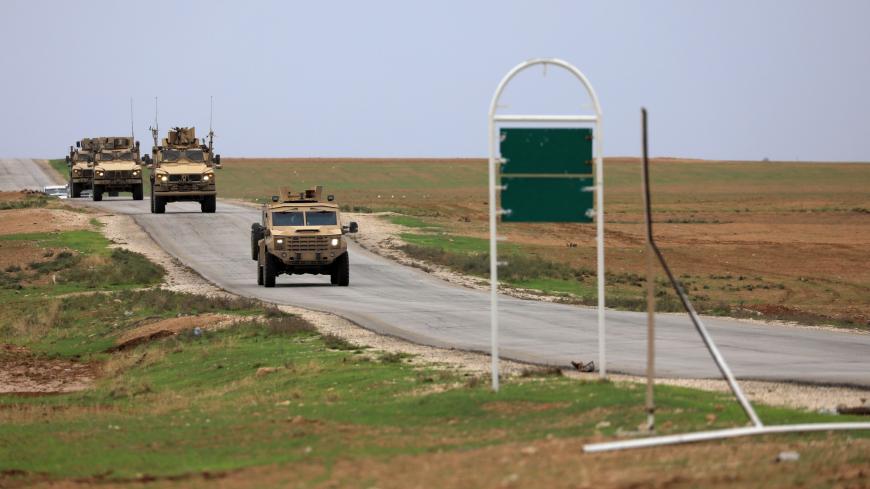 US troops patrol near the Turkish border in Hasakah province, Syria, Nov. 4, 2018. US forces have recently blocked Russian patrols from advancing along the M4 highway in Hasakah. - REUTERS/Rodi Said

Since mid-January, US troops in northeast Syria have cut off Russian patrols nearly a dozen times and forced them to turn back or take roundabout routes to reach their destinations. These cutoffs have clustered along two roads leading to American military positions, delineating zones of US influence, including critical infrastructure, four months after Trump’s withdrawal decision. The traffic incidents also coincide with the US military building up bases in northeast Syria, which indicates America is reasserting itself in the area as it puts the brakes on Russian attempts to expand.

“The Russian patrols often change their direction when they see American armored vehicles nearby,” said Ivan Hassib, a local journalist who is covering the unfolding US-Russian patrol drama and has witnessed three traffic stops along the M4 highway. “Whereas the Americans, the opposite — they’re following Russian patrols like a police officer chases a thief.”

US President Donald Trump’s decision to pull forces from the northern border in October gave way to a Turkish invasion targeting the Kurdish-led Syrian Democratic Forces (SDF), the US local ally in the fight against the Islamic State [IS]. Two weeks later an agreement between Moscow and Ankara contained the offensive. According to that deal — and two other deals between Damascus and the SDF under Russian auspices — Russian and Syrian government troops deployed to the east and west of a new zone of Turkish control on the border. Russian troops took over several abandoned US military bases and established several more, including a helicopter base at the airport in Qamishli city.

“Before the Turkish invasion and the Turkish-Russian agreement, you didn’t see Russian armored vehicles. ... Today there are dozens, maybe more,” Hassib said.

In the immediate aftermath of the American withdrawal, Russia seemed poised to replace the United States as the main foreign power in northeast Syria, a strategic and economic victory achieved at no cost — not least because Moscow has exclusive rights to rebuild the Syrian oil and gas sector and most reserves are located in the northeast.

But Trump’s decision to remain in Syria to “secure the oil” deferred this scenario. The US military, having abandoned the northern border, reinforced bases in Deir ez-Zor and Hasakah provinces — in effect, shifting the weight of the US Syria presence east, toward the Iraqi border. And recent diplomatic moves indicate US support for the SDF in talks to end the civil war — pending another American presidential about-face.

One of the bases the United States is building up is located at Tal Baydar, on the M4 highway 20 kilometers (12 miles) from a Russian military point in the town of Tal Tamr. On multiple occasions during the second half of January, US armored vehicles arrived at the outskirts of Tal Tamr and prevented Russian patrols from heading east on the M4 highway toward Tal Baydar, said Hassib, who witnessed two incidents. Hassib also reported Jan. 27 on US forces blocking a Russian patrol, which had set out southward from the border town of Amuda, from entering the M4.

The Russian patrols appear determined to access this stretch of the M4 highway, which links Syria’s second largest city, Aleppo, with northeast Syria and then Iraq. But in addition to the US base at Tal Baydar on the M4, American forces also control a nearby airfield.

Just south of the M4 the United States has a base at the Wazeer rest stop; it also recently took over a YPG point in the city of Hasakah, and is building a base in Tell Brak. As a result “the M4 is a red line right now” east of Tal Tamr until Qamishli on the Turkish border, Hassib said. This includes traveling east along the road and southeast of it.

US troops have drawn another red line in the northeasternmost corner of the country, around the city of al-Malikiyya. The Rmelan oil fields and the Semelka border crossing with Iraq are nearby, as well as several American military points. Like the M4, the Russians have repeatedly tried to access the al-Malikiyya countryside in recent weeks.

On Jan. 18, “a Russian patrol was heading [from Rmelan] toward the Khan al-Jabal crossroad, which goes toward Semelka. ... The Americans parked armored vehicles along the road and didn’t let the Russians pass,” a resident of al-Malikiyyah, who wished to remain anonymous for security reasons, told Al-Monitor, recounting the episode as he witnessed it.

“The SDF and residents asked the Americans to open up the road so people could pass, and asked the Russians to go back. ... It’s a public road,” he added. The hourlong standoff was resolved in that manner, before being repeated three days later “in roughly the same area — it was the same type of incident and the same result,” the resident said. The Russians also made an unsuccessful attempt on the al-Malikiyya countryside Feb. 4.

“It’s become the talk of the street: The SDF is mediating between the Americans and Russians, and reconciling them. ... The SDF has become a guarantor power,” said the al-Malikiyya resident. He was referencing the “guarantor” status granted to states overseeing a series of failed cease-fire and de-escalation agreements in Syria.

In early January, the Syrian Observatory for Human Rights reported on a Russian delegation photographing the Semelka crossing. The repeated Russian attempts to access the al-Malikiyya countryside indicate that Moscow has its eye on Semelka, the lifeline for humanitarian supplies and an entry point for commercial goods and military aid destined for the SDF, as well as military and logistical equipment for US forces.

Despite their frequency, the chance these US-Russian traffic standoffs will spiral into open conflict seems low. “These incidents all get worked out at military channels, sometimes at the colonel level, sometimes at the one-star level, sometimes at the three-star level,” US special envoy for Syria James Jeffrey said Jan. 23. On Feb. 5, Jeffrey attributed the incidents’ peaceful resolution to “the professionalism of the troops on the ground, beginning with our troops,” before noting that “any commander would be concerned about this, and we call upon the Russians to adhere fully to the deconfliction agreements we’ve made with them.”

This year’s patrol drama indicates that US troops will not allow their Russian counterparts to access America’s post-withdrawal zone of influence, including critical infrastructure such as the M4 highway and the Semelka crossing. The US military is effectively putting the brakes on the Russian expansion in northeast Syria that followed Trump’s pullout decision.

“The Americans are making the Russians move in those areas next to the Turkish presence, and only those areas,” Hassib said. This includes the eastern edge of Turkey’s latest border acquisition, as well as the region adjacent to the Turkish border in the countryside around Darbasiyah and Amuda and parts of Qamishli.

“On the ground the Americans, right now, are doing the opposite of the decision to withdraw from the area … they are really making sure to have the main role,” Hassib said. 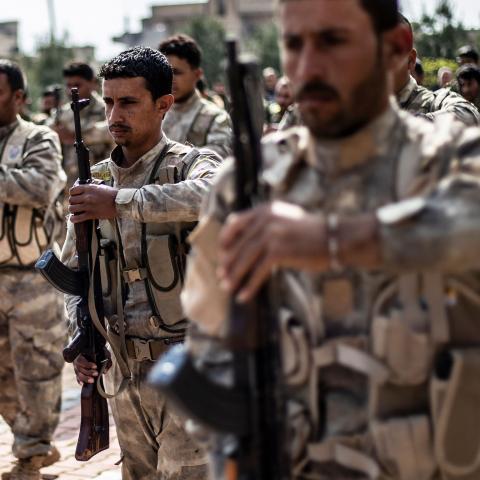