Syrian Democratic Forces continue to besiege the Syrian regime in Hasakah province in northeastern Syria, amid fears of an escalation between the two parties. 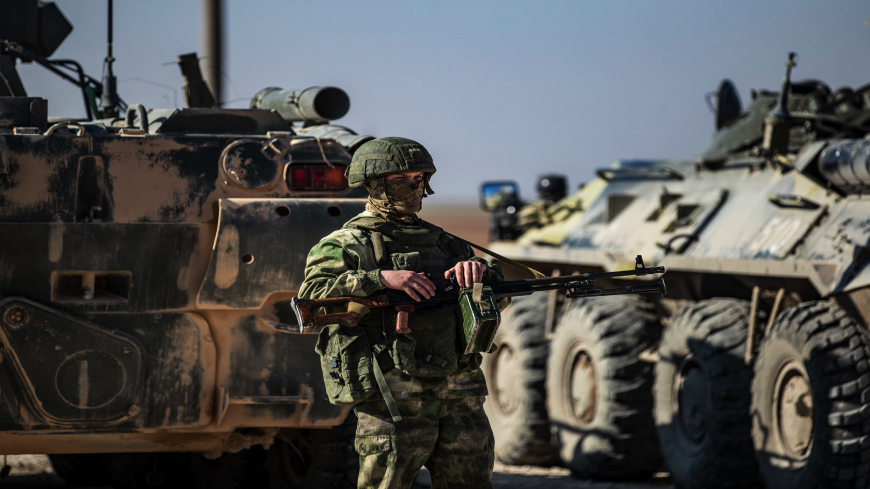 A Russian soldier stands guard as troops escort a convoy of Syrian civilians leaving the town of Tal Tamr in the northeastern Hasakah province to return to their homes in the northern town of Ain Issa in the countryside of the Raqqa region, via the strategic M4 highway, on Jan. 10, 2021. - DELIL SOULEIMAN/AFP via Getty Images

Clashes broke out in the city of Qamishli on Jan. 23 between the regime-affiliated National Defense Forces and the SDF-affiliated internal security forces known as Asayish. The National Defense Forces in Qamishli blamed the SDF for the clashes in a Facebook post, saying, “Some people were shooting in the air to celebrate a wedding that was taking place near the positions of the Syrian army. Following that, the Asayish shot at the Syrian army checkpoints in the area, which prompted an immediate response [from the army].”

Asayish accused members of the National Defense Forces of attacking their inspection checkpoints and firing live bullets at them, to which the Asayish responded. In a media statement, Asayish said, “In coordination with the relations office affiliated with our forces, the Russian forces worked to restore calm in the city. The Russians also pledged that the National Defense [Forces] militia will not repeat such actions.”

Still, the clashes resumed during the night of Jan. 23, leading to a number of injuries among the ranks of the National Defense Forces.

Tensions between the regime and SDF began to appear in early January. On Jan. 2, a man who the SDF said belonged to the National Defense Forces threw a bomb at an SDF security patrol in central Hasakah. The incident killed one person and injured 20 others, including members of the security patrol, according to the local North Press Agency.

Russia, for its part, is working to deescalate the situation by mediating between the two parties. These efforts coincide with Russia’s military reinforcements in Hasakah province. The Russian Rusvesna website reported on Jan. 22 that aircraft belonging to the Russian air force are transporting Russian forces to the Qamishli military airport in Syria. According to the Russian TASS agency, members of the Russian military police and more than 300 Russian military forces were aboard these aircraft.

The SDF has reportedly issued a set of demands in exchange for lifting the siege imposed on the regime’s positions in Hasakah province. The regime considered these demands an attempt by the SDF to achieve gains in the area and in other provinces and expressed its forces’ readiness for any confrontation or escalation against the SDF.

Questions arise as to what the SDF’s demands are and whether they constitute a pressure card used by the SDF to weaken the regime’s influence in Hasakah province, or whether they are a prelude to the regime’s expulsion from the area. Meanwhile, questions are also on the table about the Russian mediating role in this dispute.

Soheb al-Yurubi, a journalist at al-Khabour website, which follows up on news in Hasakah province and northeast Syria, told Al-Monitor, “The SDF has a set of demands not only for the Syrian regime but also for Russia. The SDF is mainly demanding that Russia take a clear position on the field developments in the town of Ain Issa in northern Raqqa, i.e., to provide guarantees that it (Russia) will prevent any Turkish offensive in the area (Ain Issa). The SDF is also demanding that the regime and Russia accept their conditions regarding the joint management and military deployment in Ain Issa.”

Yurubi added, “The SDF are also demanding that the regime release around 500 Kurdish prisoners who have been detained since 2004, and facilitates the SDF movement on the M4 highway and communication between al-Shahba area in the northern Aleppo countryside and Sheikh Maqsoud and Achrafieh neighborhoods in Aleppo city.”

It seems most of the SDF demands are rightful, most notably the freedom of movement and mobility between areas under their control. The regime’s Fourth Division has besieged al-Shahba area where camps for displaced Kurds from Afrin are located and has prevented the entry of fuel and movement between Sheikh Maqsoud and Ashrafieh neighborhoods and al-Shahba area.

Yurubi noted, “The Russians are preparing to act as separation forces between the two sides. Russian forces have already taken a position in central Hasakah and Qamishli where they raised their flag on several buildings amid heavy deployment of Russian armored tanks and military police. The SDF, for its part, has several pressure cards and has begun using them. It already expelled government employees from the civil affairs departments and courts in the town of Tal Tamr, prevented the medical staff from entering the Qamishli public hospital, and took control of some of the regime’s headquarters. But the regime continues to bet on the Russian presence to stop the escalation and prevent any US interference in favor of the SDF. For Russia, this is an opportunity to bring in additional forces to the area.”

Ahmed Hassan Abdel Qader, a political activist, told Al-Monitor, “The SDF is trying to put an end to the regime and Russian blackmail in Ain Issa, and seeks to shrink the influence of the Syrian regime and its affiliated militias in the areas under [SDF] control in northeast Syria. I don’t believe the SDF moves aim to expel the regime from Hasakah.”

Bilal Sattouf, a researcher in political science in northern Aleppo, told Al-Monitor, “The SDF seeks to deliver to the Syrian regime and Russia a message whereby they continue to hold pressure cards. The SDF has always considered themselves revolutionary forces fighting against an authoritarian regime. Yet they had taken strategic steps to get closer to the regime occasionally when being subjected to Turkish political and military pressures.”

Sattouf said “the success of the Russian mediation depends on the response to the SDF demands. Also, the upcoming positions the new US [administration will adopt] will determine which party will have the upper hand in any future settlement.”

For his part, Capt. Abdulsalam Abdulrazzaq, a researcher in military issues, told Al-Monitor, “Russia has an interest in the long-standing tension between the SDF and the regime in Hasakah in order to complete its deployment. The tensions would also allow Russia to enter the heart of the US areas of influence in northeast Syria. The new Russian presence in the area would pave the way for competition with the US [over influence], the effects of which will be seen later on.”