The Syrian government and Russian media sites are promoting a new agreement between Russia and the Syrian Defense Forces that guarantees the regime's takeover of the Ain Issa area in northern Raqqa. 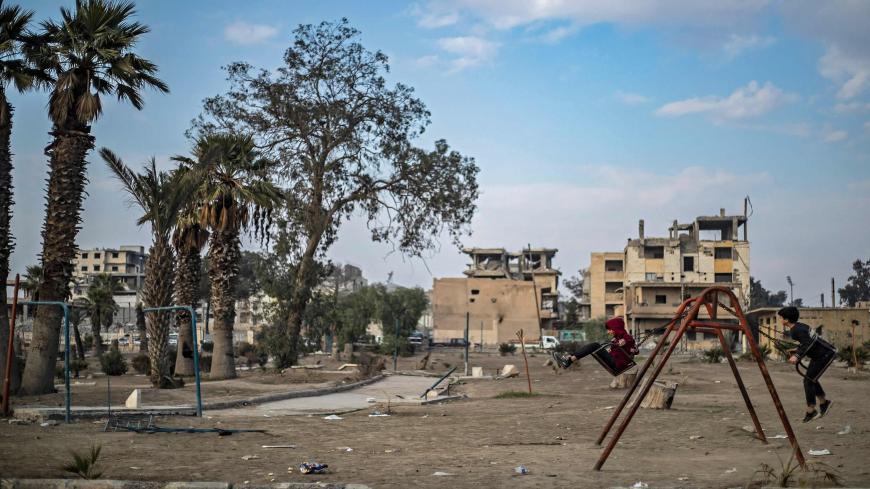 Boys play on swings in the northern city of Raqqa, the former Syrian capital of the Islamic State, Syria, Dec. 20, 2020. - Delil Souleiman/AFP via Getty Images

ALEPPO, Syria — Riyadh al-Khalaf, chairman of the Tell Abyad Military Council affiliated with the Syrian Democratic Forces (SDF), denied in a statement to Hawar News Agency ANHA, reaching an agreement with Russia regarding Ain Issa. “All the news about reaching an agreement with the Russian forces are baseless; this is false and the control map is still intact following six weeks of Turkish military escalation,” Khalaf said Dec. 28.

His statement came against the backdrop of the Russian military police deployment in Ain Issa, which was considered as evidence of an agreement over the SDF handing over the area to Russia and the Syrian regime.

Omar Rahmon, member of the National Reconciliation Center that is affiliated with the Syrian regime and Russia, made claims promoting an agreement between the two sides. “Ain Issa will return to the homeland thanks to the Syrian and Russian military boots. This is not a national awakening by the SDF, but rather an eagerness for protection that it was unable to reach through the United States, and in recognition of its weakness in front of Turkey and inability to protect it,” Rahmon tweeted Dec. 27.

Speaking to Sputnik, Rahmon said, “The agreement was concluded Dec. 27 in the town of Ain Issa, during which the SDF pledged to hand over the town to the Russian side and the Syrian army, after several days of negotiations. The Kurds told the Russian side that they are ready to withdraw from Ain Issa completely.”

The Russian TASS news agency reported that the Russian Defense Ministry announced the dispatch of additional forces to Ain Issa, northern Raqqa, on Dec. 27, quoting the deputy director of the Russian Khmeimim air base in Syria, Maj. Gen. Vyacheslav Sitnik, as saying that additional Russian military police units have been deployed “to strengthen efforts to establish stability in the Ain Issa area.”

Sitnik noted, “Unstable conditions were recorded in the Ain Issa area,” adding that “agreements were previously reached during negotiations with the Turkish side on the establishment of joint Russian-Syrian posts.”

A military source in the Tell Abyad Military Council told Al-Monitor on condition of anonymity, “The SDF has not concluded a new agreement with Russia, nor are the rumors about the town being handed over to the regime’s forces true. The SDF will not hand Ain Issa to anyone.”

The source noted, “What the Russian media and figures affiliated with the regime are claiming aims to pressure the SDF and create confusion in the area,” noting that an agreement was reached with Russia Dec. 9, which includes the deployment of Russian and regime observation posts in the vicinity of Ain Issa.

On Dec. 9, Khalaf said that the council had reached an agreement with the Syrian regime and Russia on establishing three joint observation posts in the town of Ain Issa, according to ANHA.

Abul Wahhab Assi, a researcher at the Jusoor for Studies Center in Turkey, told Al-Monitor, “The agreement that the regime is promoting between Russia and the SDF does not exist. It does not seem that the regime has actually won in Ain Issa, because the new formula — which is not an agreement — is just a preliminary understanding, according to which civilian institutions and facilities remain under the control of the Autonomous Administration, as well as the [Internal] Security Forces [Asayish] maintaining their posts in northeastern Ain Issa. The regime was thus unable to impose the Qamishli model represented by the security perimeter in Ain Issa.”

Assi added, “On the other hand, it seems that Russia has sought to obtain more gains with the deployment of its military police in the town and the establishment of a military base south of Ain Issa and northern Raqqa. Russia may hope that its military influence will persuade Turkey to extend the deadline to settle the status of the town, but there is no guarantee that Turkey will accept. The SDF gained a new opportunity by obtaining additional time, in the hope that it would be supported by the new US administration to confront Turkey and Russia.”

Capt. Abdulsalam Abdulrazzaq, a military analyst in the northern countryside of Aleppo, told Al-Monitor, “It can be said that the SDF has not yet yielded to Russian pressure to hand over Ain Issa to the Syrian regime, under the pretext of avoiding a large military operation that the Turkish army might launch. Meanwhile, the latter was pushing the opposition factions to escalate the military situation there since the beginning of December. For its part, the SDF wants the presence of the regime forces and Russia to be formal in the town, through observation posts with the participation of the regime and Russia on the M4 international highway, to prevent a Turkish attack, while the regime wants to impose its full control and push the SDF to withdraw completely.”

Abdulrazzaq said, “The SDF’s military and political wings disagree over the agreement with Russia and the issue of handing over Ain Issa to the regime to deny the opposition and Turkey. It seems that the active wing in the SDF prefers political maneuver and accepting the entry of the regime forces and their deployment on the lines of contact while retaining the Ain Issa administration, as well as the military deployment of SDF inside and around it.”

The military escalation continues in the northern outskirts of Ain Issa between the SDF and the factions of the Turkish-backed Free Syrian Army (FSA), while intermittent clashes break out on the fighting axes in the villages of al-Mushairefah and al-Jahil between the two sides amid intense artillery shelling by the Turkish army on the SDF posts in the vicinity of Ain Issa, recently resulting in several deaths among the SDF’s ranks.

Ibrahim al-Habash, a journalist and director of Al-Khabour Network, a local network in the opposition-controlled areas in northern Raqqa, told Al-Monitor, “The opposition factions are still bringing military reinforcements to Ain Issa fronts, and they are awaiting the starting signal for the battle to take over the town controlled by the SDF. Daily clashes are taking place on the Ain Issa fronts in addition to mutual bombardment between the SDF on the one hand and the FSA and Turkish army on the other.”