No sooner had an agreement been reached between the Syrian regime and US-backed Syrian Democratic Forces to lift the mutual sieges imposed in northeast Syria that accusations were traded about violations of the Russian-sponsored deal. 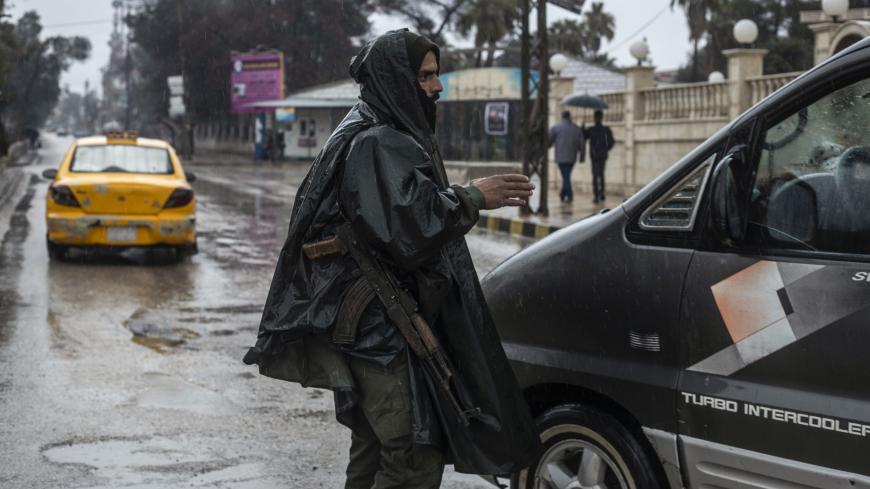 A members of the Kurdish internal security police force, also known as the Asayish, mans a checkpoint in the northeastern Syrian Kurdish-majority city of Qamishli, on Jan. 31, 2021. - DELIL SOULEIMAN/AFP via Getty Images

ALEPPO, Syria — The Syrian regime forces and the Syrian Democratic Forces (SDF) in northeastern Syria reached  a Russian-mediated agreement Feb. 2 to end a 20-day siege in Hasakah and Aleppo amid rising tensions between the two parties.

The agreement raised several questions about whether the two parties would abide by it and if its provisions met the demands of the SDF.

Under the agreement, the internal security forces affiliated with the Kurdish autonomous administration declared an end of the siege imposed on the regime-controlled areas in Hasakah in northeastern Syria. The forces, known as the Asayish, said in a Feb. 2 statement, “We assert that life will be back to normal and that we will allow the entry of all resources to the areas of presence of the Syrian regime forces in Qamishli and Hasakah.”

They added, “This is a sign of goodwill to preserve the unity of the Syrian territories and soil and to protect Syrians from bloodshed,” noting that the tensions in Qamishli and Hasakah “were created by the Syrian regime forces in an attempt to target the stability in our areas.”

According to the agreement, the SDF must lift the siege imposed on the two security enclaves of the regime in Hasakah and Qamishli, and allow the entry of wheat provisions to the central neighborhoods of Hasakah in exchange for the entry of aid to the SDF-controlled areas of Sheikh Maqsoud and Tel Rifaat in Aleppo and its northern countryside.

Shortly after the agreement between the SDF and the regime was announced, doubts surfaced about the commitment of both parties to implementing the cease-fire.

On Feb. 3, the regime accused the SDF of noncompliance and of failing to fully lift the siege of the Security Quarter in Qamishli, where the official regime security departments are located. The regime claimed the SDF redeployed its military checkpoints in Hasakah and banned the entry of wheat trucks.

But, it appeared that the regime’s claims regarding the return of tensions and the SDF’s siege were inaccurate, as wheat was supplied Feb. 4 to the bakeries in Qamishli. For its part, the Thawra newspaper close to the Syrian regime confirmed Feb. 4 the entry of flour to the bakeries in Hasakah.

An official source in the autonomous administration in Hasakah told Al-Monitor on condition of anonymity, “The siege was lifted completely off the neighborhoods where the regime is present in the center of Hasakah and Qamishli. The traffic of food provisions and people has been normal since the agreement entered into force.”

A resident of Sheikh Maqsoud told Al-Monitor on condition of anonymity, “The agreement between the SDF and the regime in Hasakah has had positive effects on the SDF-controlled neighborhood and on the areas under their control in Aleppo’s northern countryside, known as Shahba canton.”

The resident added, “The regime’s checkpoints in the vicinity of the Sheikh Maqsoud neighborhood and around the Shahba canton lifted restrictions on the movement of people and vehicles and reduced the level of security and inspections. The regime forces allowed trucks loaded with oil derivatives to cross to the area, and several trucks carrying food and supplies passed as well. A delegation of Russian officers visited several military points and SDF headquarters in the vicinity of Sheikh Maqsoud. The Russian delegation briefed SDF officials on the terms of the agreement that will be implemented during the coming period, including freedom of movement and lifting the security siege on the SDF-controlled areas in Aleppo.”

Othman Malo, a member of the politburo of the Kurdistan Democratic Party of Syria, told Al-Monitor, “The agreement brokered by Russia between the SDF and the regime will not stand for a long time, because it did not [settle the disputes] between the two parties and did not meet their aspirations. The tensions and siege might resurface any minute.”

He added, “The SDF wants to maintain its military and political presence in Aleppo by using its power cards in Hasakah. This was mainly the reason it besieged the regime’s security enclaves in Hasakah and Qamishli for nearly three weeks. If the regime does not commit to lifting the siege of the SDF-controlled areas, the SDF will exercise its pressure on the regime in Hasakah once again.”

He said, “The SDF is extracting strength from the US pressure on the Assad regime in its areas of control in Hasakah and all the eastern Euphrates areas. The SDF leadership is also divided and conflicted over the relationship with the regime. The current led by the Kurdistan Workers Party [PKK] within the SDF does not want to escalate against the regime, and it is largely influenced by the relations with Iran and Iranian interests in Syria. Iran is pressuring the SDF through the PKK to distance the US from the eastern Euphrates. The other current in the SDF has a random and constantly changing policy. The first current has authority over the second current. Consequently, the SDF’s motives for escalation might resurface any second due to the internal rift.”

A representative of the Kurdish Future Movement, Ali Tami, told Al-Monitor, “The conflict between the SDF and the Syrian regime in Hasakah and Qamishli probably will not last long. The SDF is testing the seriousness of its relationship with the new US administration. It is trying to open a commercial door with the opposition in the northwestern areas in Syria to achieve economic independence from the regime, which is obviously bothered, as are its allies. The complex demographic composition in the eastern Euphrates may also be a contributing factor to the outbreak of another round of escalation, the persisting conflict and the potential collapse of the SDF administration. The Syrian regime has tried to take advantage of this issue during the recent siege period by mobilizing the public and tribes against the SDF.”

Tami said, “The SDF is asking the regime for political recognition of its administration in northeastern Syria, but this will not happen for many reasons. The SDF has a weak spot, which is the PKK’s control of its military and political decisions. Besides, the PKK has a broad base of support within the SDF, but it is a weak one due to its different ethnic components. It is ruled with an iron fist and might turn against the SDF any minute.”