Can Syrian Kurds’ offer unlock door to compromise with Turkey?

The Syrian Kurds have offered Turkey a 5-kilometer-deep buffer zone that would see the pullout of Kurdish forces and heavy weaponry, without seeking the withdrawal of Turkish troops from Afrin, but only that of aligned militia. 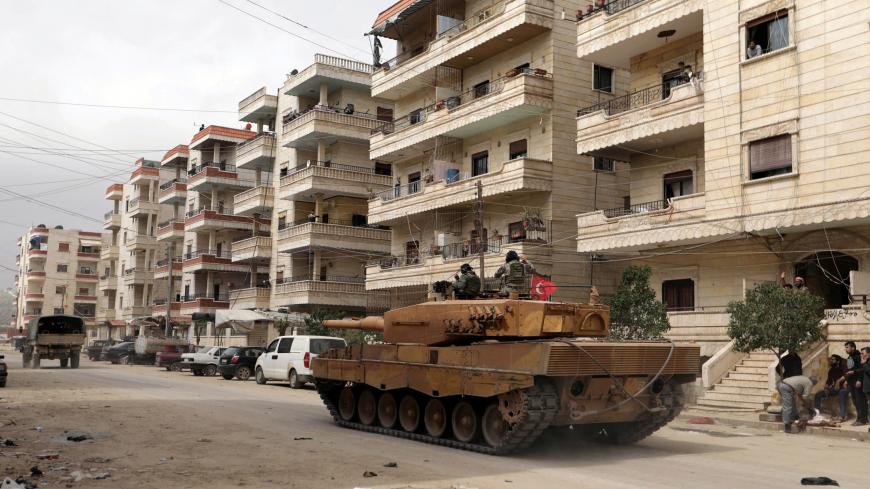 Turkish soldiers ride on a military vehicle in the center of Afrin, Syria, March 24, 2018. - REUTERS/Khalil Ashawi

In early July, just as an international conference on the Islamic State (IS) was under way in the northeastern Syrian city of Amuda, Turkey amassed tanks at the border again, signaling resolve to enter the Kurdish-held territory east of the Euphrates. The rumbles of tanks, however, no longer give anyone the shivers. They are widely seen as Turkey’s way of turning up pressure on Washington as bargaining continues on a planned safe zone along the border. And while threats have become workaday, the field of diplomacy has witnessed a remarkable Kurdish overture.

In his latest visit to Ankara on July 22, Jim Jeffrey, the US special envoy for Syria, may have achieved little, but the Syrian Kurds, it turns out, have conveyed a proposal to Turkey’s intelligence agency as part of indirect contacts mediated by Jeffrey — a proposal that seems to have relieved the Americans and given them room to maneuver against Ankara.

In an interview with Al-Monitor at his headquarters in Hasakah, Mazlum Kobane — the commander in chief of the Kurdish-led Syrian Democratic Forces (SDF) whose real name is Ferhat Abdi Sahin — shared details about the safe zone offer and clarified the nature of contacts with Turkey’s National Intelligence Organization (MIT).

Kobane said that in December, after Turkish President Recep Tayyip Erdogan threatened an imminent incursion into the eastern side of the Euphrates, the Kurds sought contacts with the Turkish side via the Americans and, in a bid at a compromise, made their own offer for a safe zone. The proposal rests on the following basics, as explained by Kobane:

Kobane said that the proposal was sent via Jeffrey and that there were indirect contacts with MIT members. He said direct meetings with MIT took place only years ago during the IS siege of the border town of Kobani and that MIT head Hakan Fidan was never present in them.

Regarding the presence of Turkish troops in Afrin, Kobane said, “We have not put any condition requiring the pullout of Turkish soldiers from Afrin. That’s an issue for a later stage. The United States is the interlocutor. There has been no development thus far. The ball is in Turkey’s court.”

Asked about the scope of a possible Turkish operation, the SDF commander surmised that Turkey’s strategy would be “to seize Gire Spi [Tell Abyad] and Kobani and stop there.” Turkey has deployed two mechanized infantry brigades, two armored brigades and two commando brigades along the 60-kilometer (37-mile) border stretch between Suruc and Akcakale, the Turkish towns facing Kobani and Tell Abyad, respectively.

The commander said his forces were ready to fight, if efforts at compromise fail and Turkey launches an incursion. “We have made our stance clear and made preparations — we will fight,” he said.

Kobane warned that a Turkish intervention would trigger a sprawling war, implying that Turkey’s seizure of Afrin last year was relatively easy because of a “strategic decision” the Kurds made at the time. “We did not want the war to expand. We wanted to keep it limited to Afrin,” he said. “The eastern Euphrates, however, will not be the same. Any attack by the Turkish army will turn into a big war. If they attack Gire Spi [Tell Abyad], for instance, the war front will extend all the way from Derik to Manbij.”

Kobane stressed that “everyone — Turkey, the United States and France alike” were aware of the Kurdish resolve to fight. “If we come under an attack, a border stretch of 600 kilometers [373 miles] will turn into a battlefield. It would mean the beginning of a second civil war in Syria,” he said.

And what if the United States strikes a deal with its NATO ally that goes against Kurdish interests? “This is not about trust or mistrust; this is America’s problem,” Kobane said, reiterating the Kurds’ determination to fight. “The SDF does not want to be a party sabotaging an agreement. We do not want a war with Turkey. We will be only defending ourselves,” he said.

While Jeffrey was visiting Ankara, US Central Command chief Gen. Kenneth McKenzie and the US deputy envoy to the anti-IS coalition, William Roebuck, met with the SDF commander in Kobani. In a press statement after the meeting, Kobane stressed that “the SDF and the international coalition are largely in agreement on the issues discussed.”

According to a Kurdish source knowledgeable about the meeting, the Americans promised to not allow a Turkish attack in the area. “This is the shared position of all coalition forces, not just the United States. The French are even calling for practical measures to prevent an intervention,” the source told Al-Monitor.

In Ankara, Jeffrey and his Turkish interlocutors failed to make a breakthrough, but agreed to continue the dialogue. Several days later, however, Erdogan declared that Turkey is “determined to rip apart the terror corridor to the east of the Euphrates, regardless of how the talks with the United States … end up.”

Ankara has been pressing for a safe zone with a depth of 30 to 35 kilometers (roughly 19-22 miles), to be controlled by the Turkish military, including the airspace. It wants armed groups under the umbrella of the Turkish-backed Syrian National Army deployed in the zone and for local Syrians who are currently refugees in Turkey to be resettled there. Moreover, Ankara continues to insist on control of Manbij. The prime motivation behind this strategy, which encompasses all settlements adjacent or close to the border on the eastern side the Euphrates such as Kobani, Tell Abyad, Sari Kani, Amuda, Qamishli and Derik, is to fully dismantle the Kurdish-led autonomous enclave taking shape in the region. Nevertheless, Turkey could be prepared to make do with Tell Abyad and Kobani under the current circumstances, as the SDF commander points out.

Many observers believe Turkey will sustain pressure at the border in a bid to extract concessions, but will not launch a unilateral incursion without a green light from Washington. This, however, does not eliminate the risk of faits accomplis. Pointing to the buildup on both sides of the frontier, Kobane warned that the tense climate was providing easy ground for provocations. “A misstep or a spark could grow into a fire,” he said.

In a telling example, a rocket fired from Kurdish-held Sari Kani hit Ceylanpinar across the border amid the flurry of diplomatic contacts July 22. At least five people were injured in the Turkish town. An SDF spokesman said later that the perpetrator had sought to foment unrest and had been caught.