The US-Turkish deal on a safe zone in northern Syria has averted the prospect of Turkey fighting the Kurds, but the parties have stepped into a diplomatic minefield, where the interests and objectives do not match. 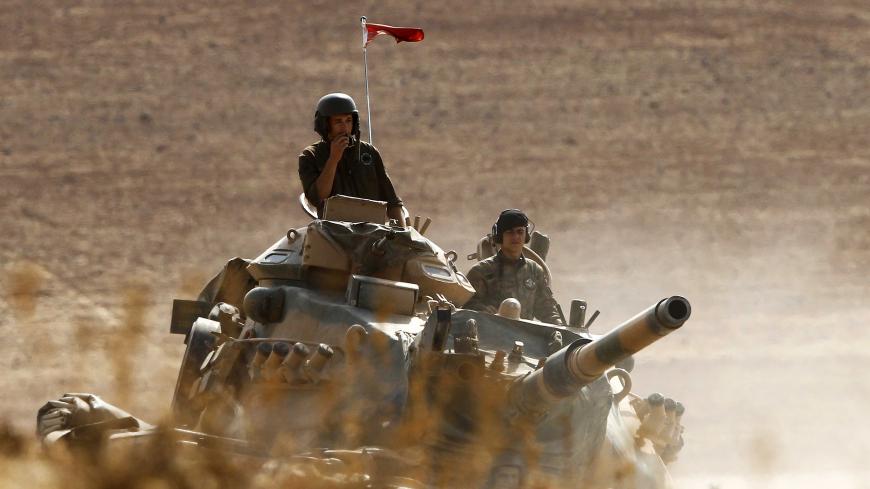 Turkish soldiers hold their position on a tank as they watch the town of Kobani from near the Mursitpinar border crossing, on the Turkish-Syrian border in the southeastern town of Suruc in Sanliurfa province, Oct. 13, 2014. - Gokhan Sahin/Getty Images

Renewed arm wrestling is underway in the wake of the US-Turkish accord on creating a safe zone in northern Syria. The sides failed to define the specifics of the zone, even though the deal averted a unilateral Turkish incursion into Kurdish-held areas to the east of the Euphrates River.

The three points announced as part of the accord — reached Aug. 7 in Ankara with indirect Kurdish participation — call for measures to address Turkey’s security concerns and the creation of a joint operations center in Turkey to coordinate the establishment of a safe zone, which would then become a “peace corridor.” The joint operation center is the only concrete action specified in the deal, and an American team has already arrived in the border province of Sanliurfa for that purpose.

An array of contentious points were left to further negotiations, including key issues such as the depth and length of the safe zone, who will control it and whether it will encompass cities. Each party is now mulling using the deal as a convenient monkey wrench to their advantage.

For days after the deal, the only comment from the Syrian Kurds was that the details of the accord had not been decided. Via US mediators, they had earlier offered Turkey a safe zone with a depth of 5 kilometers (3.1 miles). Then, on Aug. 10, Turkish President Recep Tayyip Erdogan, referring to major military victories in Turkish history won in August, vowed to “add a new one to that series of victories this August.”

Defense Minister Hulusi Akar asserted the depth of the zone should be 30 to 40 kilometers (roughly 19 to 25 miles), adding, “Our plans B and C are ready. We’ll be having our own activities as well.”

Finally, Foreign Minister Mevlut Cavusoglu said that “many issues have yet to be detailed,” acknowledging that the scope of the zone remained disputed, but made a point of recalling what a “promise” by US President Donald Trump. According to the minister, Trump had promised a 20-mile-deep safe zone aimed at “removing” militants of the Kurdistan Workers Party (PKK) and its Syrian affiliate, the People’s Protection Units (YPG), both of which are considered terrorist groups by Ankara.

Earlier this week, the plan the Americans proposed in Ankara was leaked to the Turkish media. The plan reportedly involves the creation of a safe zone that would be initially 5 kilometers deep and patrolled jointly by Turkish and US troops. The YPG would withdraw from the area. Turkish troops would not be allowed to enter urban centers, with local military councils controlling settlements. In the second phase, a belt with a depth of 9 kilometers would be added to the south of the zone. Heavy weaponry would be removed from that belt, but the YPG would stay and there would be no Turkish presence. In the third phase, the belt would be extended by another 4 kilometers, with the YPG allowed to stay without heavy weaponry. In total, the depth of the safe zone would reach 18 kilometers.

Then, the Kurds finally spoke out. The Kurdish media pointed out that the Kurdish side accepted only a 5-kilometer-deep safe zone along the whole border with Turkey, while Mazlum Kobane, the chief commander of the Kurdish-led Syrian Democratic Forces, stressed there was no final agreement yet and indirect negotiations with Turkey were continuing. Still, he drew the contours of the safe zone the Kurds would accept. Accordingly, it should be a 5-kilometer-deep zone between the Euphrates and the Tigris, with the depth extending to 9 kilometers in certain areas between Tell Abyad and Ras al-Ain and to 14 kilometers in a tiny area through which a stream is flowing. The YPG would pull out from this territory, leaving it to local military councils. The airspace would be off-limits to Turkish military planes. Turkey wants to start from the predominantly Arab regions of Tell Abyad and Ras al-Ain before extending the safe zone to Kobani, Qamishli and Derik. The Kurds, however, prefer a safe zone stretching along the entire border in the hope of fully precluding any de facto Turkish intervention. On the issue of refugee returns, they say only locals should return to those areas, not refugees, as Turkey wants.

Having laid out those points, Kobane concluded, “The project we have put forward is very reasonable as it guarantees the security of both sides. That’s why our project will be taken as a basis.”

Judging by Kobane’s statements and the assessments of other Kurdish officials, the Kurds attribute the following meanings to the deal:

Beyond such considerations prioritizing the prevention of war, the Kurdish side is also waiting to see whether a comprehensive peace process involving both Turkey’s and Syria’s Kurds could start upon the appeal of PKK leader Abdullah Ocalan, who is serving a life sentence in Turkey.

A channel was opened with Ocalan while the US-Turkish talks in Ankara proceeded. In a statement through his lawyers, Ocalan expressed confidence he could “end the conflict situation within a week.” With Ankara’s knowledge, his message was taken to the PKK leadership, based in the Qandil Mountains in northern Iraq. Now all parties, including the Syrian Kurds, are awaiting the assessment that would come from Qandil.

In the previous peace process in Turkey, which collapsed in 2015, Ankara’s precondition demanding the dismantling of the de facto self-rule in Rojava was the main reason for the deadlock.

Some may brag that the joint US-Turkish mechanism came about as a result of Turkey’s deterrence power, but essentially Ankara has now moved away from the “go and smash” scenario it had in mind. The US military presence, which put the brakes on a unilateral intervention, will now be seen on the Turkish side of the border. No wonder the pro-intervention camp in Turkey believes that Ankara has placed itself in a tighter spot now. Although the joint mechanism allows for a Turkish military presence across the border, it restricts more extensive moves by Ankara. This, of course, does not mean that Turkey will stop insisting on going as deep as 32 kilometers, but a repetition of the Afrin scenario is no longer possible under the current conditions.

Meanwhile, Russia might throw Turkey some curveballs. Russia saw the prospect of Turkish pressure or controlled intervention to the east of the Euphrates as an opportunity to push the Kurds toward Damascus and deepen the Turkish-American rift. A new situation on the ground resulting from the Turkish-US partnership was not what the Russians expected. As long as the United States controls the course of events on the ground, the Kurds will not feel so cornered as to turn to Damascus, as Russia and its allies would have liked them to do. In this context, the simultaneous resumption of operations on Idlib could be read as a likely countermove by Russia.

In the current circumstances, the victory that Ankara has vowed in northern Syria appears beyond reach, forcing it to review its strategy. At home, Erdogan insists on maintaining his alliance with the nationalist-conservative camp, but optimistic speculation is growing that a shift could occur in September, with Ocalan calling on the PKK to lay down arms, paving the way for a fresh peace process.