The more Turkish Prime Minister Recep Tayyip Erdogan lashes out at “international conspirators” as the cause of his troubles, the more his international reputation suffers. 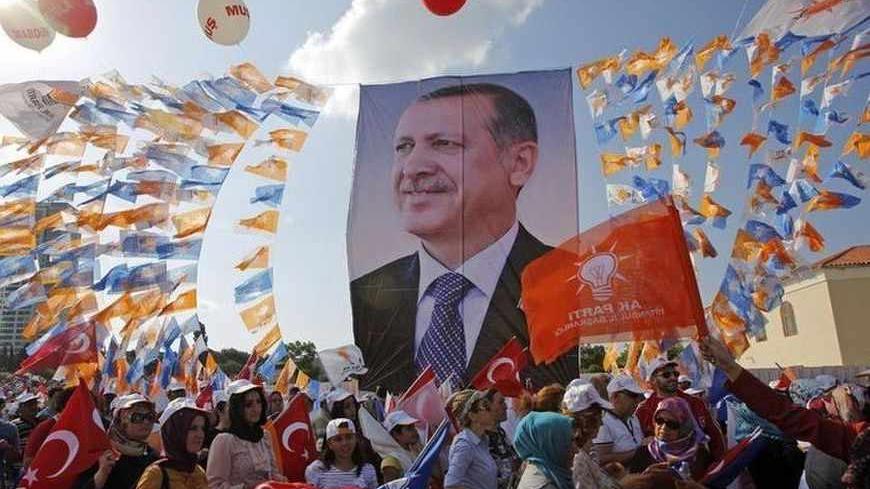 Supporters of Turkish Prime Minister Recep Tayyip Erdogan wait in front of a poster of him during a rally of the ruling Justice and Development Party in Istanbul, June 16, 2013. - REUTERS/Murad Sezer

On Nov. 28, 2011, the cover of TIME's international editions featured Prime Minister Recep Tayyip Erdogan and a caption that read, “Turkey’s pro-Islamic leader has built his (secular democratic Western-friendly) nation into a regional power house, but can his example save the Arab Spring?” On Dec. 12, 2011, the same magazine had the following to say about Erdogan in its “News Feed” section:

He’s lauded as a steward of Islamic democracy. He’s helped boost Turkey to its place as the world’s second fastest-growing economy. Though not an Arab, he’s the most admired world leader among Arabs, according to a University of Maryland poll. His diplomatic missions bring out throngs of cheering crowds that could make a rock star jealous.

Today, less than two years later, the picture is very different. Let alone not applauded as the leader of a “secular democratic Western-friendly nation,” Erdogan is no longer admired by the West as a “steward of Islamic democracy.” Neither does he have the admiration of the entire Middle East, as those who oppose Islamic rule see him as a principle agitator in favor of it. Erdogan today finds himself under increasing international scrutiny.

The widespread impression is that Erdogan has turned his democratic mandate into a device for majoritarian impositions and is transforming Turkey into an authoritarian state inspired by Islam. In addition, he has no qualms about using an overbearing police force against its opponents. This image only angers Erdogan more, rather than leading him to understand the reasons driving it.

Erdogan does not appear to have any sensible advisers or ministers who have the courage to tell him that such suggestions stretch the limits of imagination. Instead, he has a troupe around him that repeats his claims, and a mass media, the transfer of which to government friendly proprietorships is almost complete, that does its share to feed these flights of fancy.

The latest blow to Erdogan’s international reputation came on July 24, with an open letter published as a full-page advertisement in The Times of London and signed by more than 30 renowned artists, writers and scholars, including such household names as Sean Penn, Vanessa Redgrave, Susan Sarandon and Sir Ben Kingsley.

The signatories also included Turkey’s virtuoso pianist Fazil Say, who has been legally hounded in Turkey for allegedly insulting Islam, and Andrew Mango, the Istanbul-born biographer of Ataturk, the founder of modern and secular Turkey. In the letter, the signatories "vigorously condemned” what they called the “heavy-handed clamp down of your [Erdogan’s] police forces on the peaceful protesters" of Gezi Park.

Accusing Erdogan of "disregarding" the five protesters who died during clashes, they asserted that their deaths “might well constitute a case to answer in Strasbourg,” the location of the European Court of Human Rights, whose jurisdiction Turkey has recognized. What angered Erdogan’s people the most, however, was the likening of the ruling Justice and Development Party’s (AKP) mass gatherings, organized to counter the Gezi Park demonstrations, to Hitler’s Nuremberg rallies.

Answering reporters' questions in Istanbul on July 26, Erdogan belittled the signers as “types who hire out their ideas." He complained, “If these types believed in democracy, they would not be so immoral as to call a prime minister here with 50% [of the vote] a dictator.” Accusing The Times of “hiring out its pages,” he added sarcastically, “This is their moral weakness.” He also said his legal team would take action against the paper.

For his part, Huseyin Celik, AKP deputy head and government spokesman, had claimed a day earlier that the signatories had remained silent “in the face of the human drama unfolding in Syria and Egypt, while comparing the rallies of a democratically elected party to Hitler’s rallies.” He added, in a statement carried by the semiofficial Anadolu News Agency, “Those who say this must first wash their mouths out,” and then went on to accuse the signatories of “insolence.”

EU Minister Egemen Bagis, never one to miss an opportunity for snide repartee against Erdogan and AKP detractors, also jumped into the fray. He called on “God to reform the signatories” and dredged up the hackneyed reference to Syria and Egypt. “If some people are looking for Nazis, they should look at their own history, at their own mentality. But they should not worry. As they continue their attacks in this way, and spew out their hatred, our nation becomes more united,” Bagis said during an iftar dinner organized by the AKP.

As an aside, it should be mentioned here that the well-known political activism of the likes of Vanessa Redgrave and Sean Penn, especially in terms of the Palestinian cause, which is near and dear to AKP hearts, extends way beyond the political careers of both Celik and Bagis.

The signatories also wrote that there are more journalists languishing in Turkey’s prison’s today than in China and Iran combined. Erdogan’s international reputation continues to take a battering on this score, as the plight of journalists and journalism in Turkey following the Gezi Park protests took a turn for the worse, a point the International Press Institute (IPI) outlined on July 26 in a piece on the topic.

As the IPI points out, the most prominent recent development was the firing of Yavuz Baydar, a highly respected veteran Turkish journalist, and contributing writer for Al-Monitor’s Turkey Pulse, from his post as ombudsman at Sabah, whose ownership is close to Erdogan. Baydar’s reporting in the Turkish and international media on the state of Turkish journalism had earned him scores of enemies within government circles. A full account of what he experienced can be had from his own pen in a July 25 article for Al-Monitor.

Critical and objective media coverage has been Erdogan’s nightmare from the start, a fact attested by the war he declared against reporters, columnists and caricaturists after coming to power. He has succeeded in “taming” much of Turkey’s opposition media by creating an environment that forces the transfer of large circulation dailies and TV channels to AKP-friendly businessmen.

A recent report by the main opposition Republican People’s Party (CHP), titled “World’s Biggest Prison for Journalists,” provides a clear picture of the plight of journalists and the current state of press freedom in Turkey. The report, a full English text of which is available on CHP's website, provides concrete examples that contradict government claims that there are no journalists in prison in Turkey because of their work.

Erdogan has no chance of intimidating the global media, of course, so his only recourse is to raise the specter of an international conspiracy that wants to undermine Turkey. Such claims, however, only do additional damage to his international reputation. In this respect, the prime minister resembles a man in quicksand. The more he lashes out at “international conspirators” in an effort to avoid looking at the real causes behind what is happening, the more his reputation sinks.