Turkish Prime Minister Recep Tayyip Erdogan would be better served by focusing on governance, and not blaming foreign or other interests for Turkey’s problems. 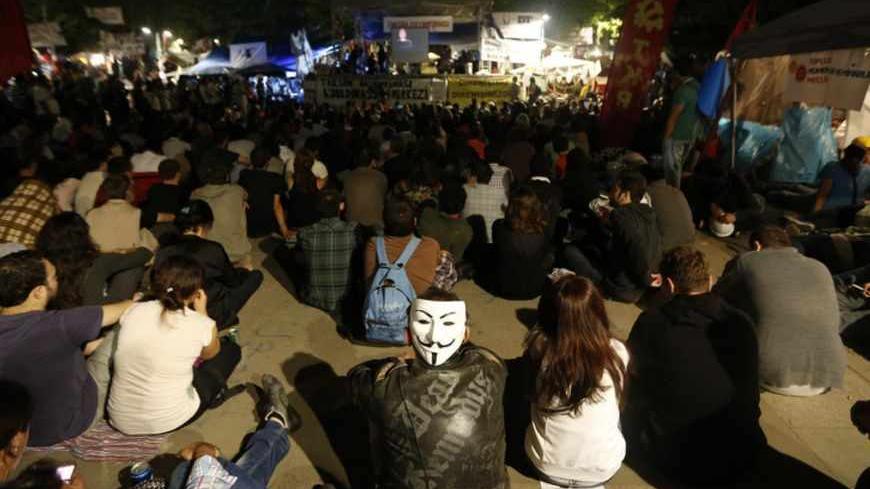 Protesters watch a film in Gezi park in Istanbul's Taksim square early on June 14, 2013. Turkish protesters said Prime Minister Tayyip Erdogan had pledged not to push ahead with plans to redevelop Istanbul's Gezi Park until a court ruled on the project. - REUTERS/Osman Orsal

The international reactions to the latest events in Turkey took Prime Minister Recep Tayyip Erdogan much more by surprise than did the outpouring of social anger by elements of society that are increasingly wary of his government’s policies.

Those elements are clearly fed up with what they see as attempts at tampering with Turkey’s secular democracy by an increasingly authoritarian Erdogan, who is believed to be using the 50% of the votes he got in the June 2011 general elections to push an Islamic agenda.

Under normal circumstances Erdogan would have used this strong mandate to belittle the protesters and disregard their demands, while continuing with his heavy-handed tactics against them, especially after having labeled them as a “capulcu,” (Turkish for pillaging and looting louts). The massive international focus on his handling of the Gezi Park protests, however, caught him unawares, throwing him off balance and clouding his judgment.

Erdogan is faced with crucial questions concerning his democratic credentials at a time when his advisers have been keen to create the impression that he is introducing advanced democracy to Turkey. That international investors are expressing concerns about what all of this means for the country’s future is also deeply disturbing for members of Erdogan’s government, given the massive infrastructure projects worth billions of dollars that are on Ankara’s agenda.

But, instead of trying to understand why there is all this focus on Turkey, and why Ankara is receiving dire warnings from the West to stay its heavy hand against demonstrators and respect their democratic rights, Erdogan has been inventing fictitious enemies, such as the curiously named “interest-rate lobby,” and blaming “outside forces” for the recent disturbances.

For Erdogan those “outside forces” clearly include not just the international media, but also the US, Germany and Italy, as well as the European Parliament. His government received no less than 15 warnings from Washington over the past two weeks, as well as blunt warnings from German Foreign Minister Guido Westerwelle, and Italian Foreign Minister Emma Bonino to behave in a democratic manner.  It must be noted here that both Westerwelle and Bonino have been keen supporters of Turkey’s EU membership bid in the past, so it is unlikely that they have a negative agenda against Turkey.

Adding its weight to these calls, the European Parliament adopted a non-binding resolution on Thursday [June 13] expressing its deep concern over “the disproportionate and excessive use of force by Turkish police to break up peaceful and legitimate protests,” and urged respect for the rights of all citizens to freedom of expression and peaceful protest. This resolution went down very badly in government circles, as might be expected.

A highly defensive Erdogan, who has responded defiantly to the governments that have criticized his handling of the recent demonstrations, also responded angrily to the European Parliament. During an address in Ankara on Friday [June 14] to mayors from his Justice and Development Party, he pointed to the ongoing demonstrations in Greece over the government’s economic stringency measures and said, “I do not recognize the resolution the European Parliament adopted on us. Those who voted for this resolution should first look at Greece.”

Erdogan also questioned why the European Parliament did not adopt a resolution following the G-8 demonstrations in London this week.

An equally defensive Foreign Minister Ahmet Davutoglu also rejected the European Parliament’s resolution. In a statement to the press on Thursday (June 13) Davutoglu said the resolution used “a tone of superiority,” adding that Turkey, which he maintained is an advanced democracy, “is not a country that needs advice from a country or a bloc of countries on this issue.”

Meanwhile many commentators in the pro-government media are also seconding Erdogan’s conspiracy theories and promoting the line that there are outside forces that are jealous of Turkey’s successes of the past decade. According to this theory, these forces are trying to undermine Turkey by using the international media to tarnish its image with a view to harming its economic performance.

Daily Haber Turk’s editor-in-chief, Fatih Altayli, for example, posed some loaded questions in his column on Friday [June 14] and asked why events in Turkey were the main news item for the international media on the day that a car bomb killed 24 people in Damascus. Altayli did not only focus on the Western media, either, while insinuating that some kind of a conspiracy was in force against Turkey. He also named Al-Jazeera, which, as he put it, is owned by the emir of Qatar, with whom Erdogan’s government has good ties.

Rather than coming up with an answer to the question he posed, Altayli indicated that he did not know the reason for the “extraordinary attention” to Turkey. “I doubt if they care in any way for Turkish democracy. But I know one thing. There is definitely something underlying all this and we will see what it is one day,” he added.

If one is to go along with this logic, one has to accept the notion that a host of international networks, from Russia Today (RT) to CNN International, from France 24 to Al-Jazeera have all united around a mission to undermine Turkey’s rising star, and also that this mission is covertly supported by the US and Europe who are behind the “interest-rate lobby.”

Those pursuing this line of thought fail to answer a simple question, though. Why should countries whose companies are investing billions of dollars in Turkey try and undermine the Turkish economy, especially at a time of recession for the international economy, when Turkey is providing lucrative investment opportunities?

Responding to the skewed mentality being promoted by the government and its supporters in the media, and focusing on Erdogan and Davutoglu’s brash responses to the European Parliament’s resolution, Cengiz Candar, the veteran journalist and contributor to Al-Monitor highlighted the absurdity of these claims. Candar indicated in his column in Radikal on Friday [June 14] that the resolution which has angered Ankara so much in fact contained nothing but the truth. “This is a resolution in which every sentence, every syllable is correct,” Candar wrote after quoting extensively from the resolution.

Whatever the government’s conspiracy theories may be, the reasons why there is so much international focus on Turkey these past two weeks, especially after the blatant police brutality against young protesters trying to protect the trees in Istanbul’s Gezi Park from being cut down for a shopping mall, is in fact not that hard to understand.

This attention stems from the fact that Turkey is one of the most important countries in the region, with its democratic and economic achievements as a predominantly Muslim country. With this identity, Turkey also provides a coherent role model for other Islamic countries in the region that are searching for their own democratic futures and economic development. Anything that appears to overshadow Turkey’s achievements as a modern and secular democracy is therefore bound to attract attention, whether this suits Erdogan and his ministers or not.

In Turkey, they say that if you go into a haman (a Turkish bath) you have to be prepared to sweat. The same applies to Erdogan, who has been vying for an important international role for himself and Turkey. It is obvious that if one enters the international arena with such expectations, then one has to be prepared for critical international scrutiny.

If Erdogan wants to keep Turkey’s democratic development and economic growth on track, he will have to realize this sooner than later, and stop wasting the public’s time with conspiracy theories that hardly shed a good light on his ability to govern a complicated and diverse country such as Turkey.