While Turkish Prime Minister Recep Tayyip Erdogan may still have some admirers in the "Arab street," he may be losing the admiration of many of the region’s leaders. 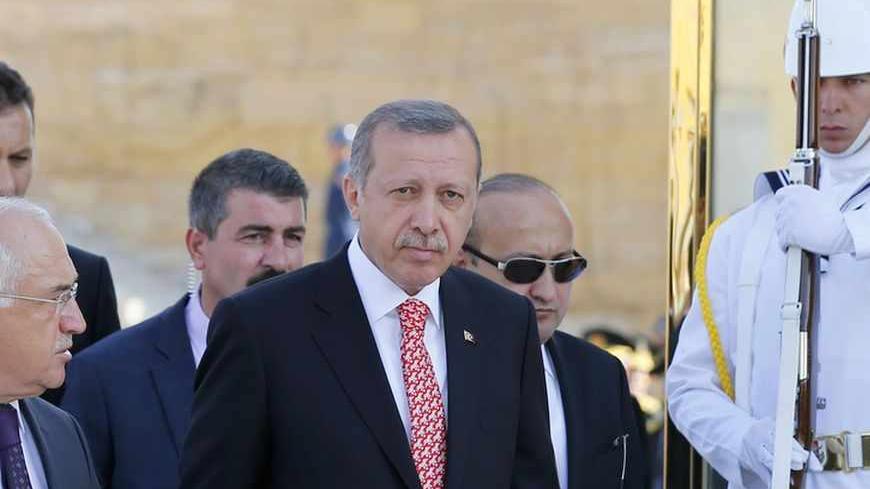 From the perspective of his unquestioning supporters in Turkey and the region, Prime Minister Recep Tayyip Erdogan is the only leader who is active in the Middle East trying to correct all the wrongs from Syria to Iraq and Egypt. Despite coming under increasing fire from some Islamist quarters in Turkey over his government’s handling of foreign policy, Erdogan is also aware of the continuing support he has from his grassroots Islamist followers, and showers them with rhetorical remarks pleasing to their ears.

He revived a hobbyhorse of his over the weekend, for example, and hit at the UN Security Council, saying its inability to stop the killings in Syria would “go down in history as a dark page.” Addressing a crowd of followers in Istanbul on Sunday, Sept. 2, Erdogan said his young supporters has started a campaign which he too supported against the Security Council with the slogan, “The world is greater than the five.”

Revealing a surprising lack of knowledge about when today’s UN was founded he said, “If a decision was taken (to establish the UN) under the circumstances that prevailed in the environment of World War I, does it mean this has to continue like this forever?”

Erdogan also said that although he was being criticized “for speaking too much,” he was merely doing his job as the elected leader of a country of 76 million people.

Erdogan’s angry rhetoric, which is also aiming now at regional powers that supported the coup in Egypt, may be going down well with his followers, but his general line of argumentation is proving to be seriously out of touch with the course of developments in the Middle East. He is also coming under fire for allegedly increasing threats to Turkey with his fiery remarks.

Many Turks were made wary after the twin car bombings in May in the town of Reyhanli, near the Syrian border, said by Turkish authorities to have been carried out by pro-Assad elements, and which left 53 people dead. Public concerns about further retaliatory attacks such as these increased after the Syria-related kidnapping of two Turkish Airlines (THY) pilots in Lebanon, and the rocket attack against the Turkish Consul General’s convoy in Mosul, Northern Iraq, on Monday [Sept. 2].

Although that attack occurred outside Syria and the perpetrators are still unknown, it has nevertheless resulted in more questions being asked as to why Turkey is being dragged into situations in the Middle East it has never had to face before. Meanwhile, Erdogan has come out openly saying any US-led operation against Syria must aim at toppling Bashar al-Assad and his regime.

His remarks stand in stark contrast, however, to Washington’s declaration that any operation designed to punish the Assad regime for the use of chemical weapons will not aim at regime change. Unlike Erdogan, it appears that the West is now looking for a gradual and controlled change in leadership in Syria because of concerns about who might take over if the Assad regime were to be toppled in a disorderly manner.

Answering questions from reporters on Aug. 30, during the Victory Day reception in Ankara, Erdogan indicated in clear terms that a limited operation against Syria would not satisfy his government. “It must be like the one in Kosovo. It must not be an in-and-out intervention over one or two days, but aim at making the regime give up,” he said, referring to the 78-day NATO operation in 1999 that forced the Serbian military out of Kosovo.

Remarks such as these clearly anger Turkey’s powerful northern neighbor, Russia, and eastern neighbor, Iran, with whom Ankara has to still maintain delicate diplomatic ties for a host of political and economic reasons. Both Moscow and Tehran continue to support the Assad regime and have expressed strong opposition to any US-led strike against Syria.

Meanwhile, Erdogan continues to hit at the military regime in Egypt, and that he has started to criticize regional Arab countries that are backing this regime is hardly likely to be going down well among government circles in Saudi Arabia, the United Arab Emirates or Jordan. These countries have vowed political and economic support for Cairo.

The result is that Turkey today is almost isolated in the Arab League, where it has observer status, which is making it much harder for Ankara to play a key role in the Middle East. Apart form this, though, Foreign Minister Ahmet Davutoglu’s gross miscalculations in relation to the Arab Spring, and Erdogan’s angry rhetoric, which has turned most of the regions powers against him, have also left Turkey facing new threats it has not had to cope with in the past.

Ankara’s Middle East policy has traditionally been marked by excessive caution, given the unpredictability of the region, which is made up of a dangerous brew of Arab nationalism, radical Islam, violent sectarianism and gross social injustice fed by a serious lack of democracy.

Turkey under Erdogan may have started with a vision of “zero problems” with the Arab countries of the region, for which the “Turkish model” was supposed to provide an inspiration while they tried to develop democratically and economically. But with the “zero problems” approach turning into a bad joke at this stage, Ankara has ended up instead facing a whole range of risks, ranging from the threat of being flooded by refugees to chemical attacks on its Eastern border.

Meanwhile, public fears are mounting that the country could face terrorism, not just from al-Qaeda-related groups, but also from vengeful radical Shiite groups that are angry over Ankara’s overt support for Sunni groups, whether they be in Iraq, Syria or elsewhere.

It is also clear that Turkey’s once good ties with regional powers like Iran, Egypt and Saudi Arabia will require some fence mending, since the administration in those countries are unlikely to be very happy as Erdogan attempts to rouse the streets in the Middle East with “Four-Finger Rabaa al-Adawiya salutes.”

The rulers of these countries have always been mistrustful of any attempt at rousing the masses. The bottom line is that while Erdogan may continue to have admirers in the streets of the Middle East, he has lost the admiration of most of the region’s leaders that he ultimately has to deal with. The result is that Erdogan has left Ankara’s traditional Middle East policy — that was always based on maintaining stability in a turbulent environment — in shambles.

He has also left Turkey facing new risks with his angry, albeit often hollow, rhetoric that is seen to be out of touch with the realities that have governed the region, and appears set to continue to do so for some time to come.