President Abdullah Gul worries about the costs for Turkey of toeing the line that the protests are part of a “grand international and domestic conspiracy.” 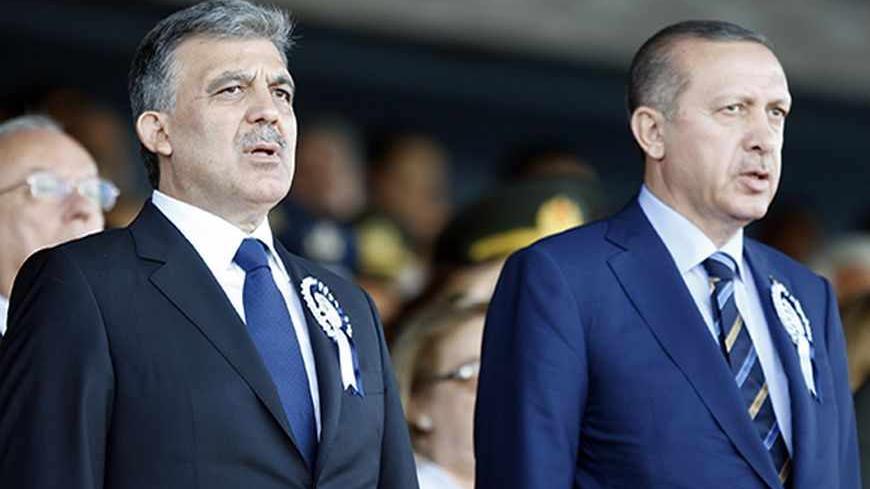 Turkish President Abdullah Gul, a staunch supporter of Ankara’s EU perspective and the democratization this has been bringing to the country, is expressing alarm over the negative image of Turkey that is emerging internationally due to the anti-government protests that have been raging for over three weeks now.

Talking to reporters after a promotional gathering at the presidential palace in Ankara on June 18, Gul was asked if he had evidence that the latest events in Turkey were “part of a great game being played against the country,” as Prime Minister Recep Tayyip Erdogan and his ministers are claiming.

Gul said these events “had shaken everyone” and added, “There are undoubtedly lessons for everyone. Now everyone has to pull themselves together, otherwise we will begin to harm ourselves. You can spend 10 years building up an image but destroy it in one week.”

Gul, whose remarks were disseminated widely by the Turkish media, went on to warn that concerns are also increasing among foreign investors over Turkey at a time when the country is issuing international tenders for massive infrastructure projects and vying for major events like the Olympics.

It was not clear to whom his warnings were addressed, and Gul did not elaborate. Many believed, however, that he was cautioning Erdogan — who is currently in the spotlight of a highly critical international media — as well as members of his ruling Justice and Development Party (AKP).

However, one of the most confrontational AKP deputies, Samil Tayyar, a former journalist and undying Erdogan supporter, appears to have no doubts as to who Gul was aiming at. Referring to Gul’s statement during the demonstrations, in which he had also said that “democracy is not just about elections,” Tayyar indicated that these remarks were “offending AKP members,” and asked if Gul “was trying to grab logs out of a flood.”

This remark was taken as insinuating that Gul is trying to benefit from the present crisis with an eye on the presidential elections to be held in 2014, when Erdogan is expected to run. Many observers in Turkey see a growing rivalry between Gul and Erdogan, which they expect will become more apparent in the lead-up to the 2014 presidential elections.

There is no technical or legal reason, of course, why Gul cannot run for president, and the view that he might is also spreading among AKP members — not all of whom are said to be unhappy about this, given Erdogan’s uncompromising stance which has started to be debilitating for the country.

Gul himself, a fellow traveler with Erdogan and with whom he established the AKP, has given no indication thus far as to whether he will run again. But those like Tayyar who are staunchly behind Erdogan are increasingly angry at Gul and the good press he has been receiving from the international media, while Erdogan’s international image is taking a nose dive.

The influential Economist magazine, for example, called on Erdogan in its June 8 edition to step down in 2014 in favor of the “the more statesmanlike Mr. Gul.” Many AKP members see such commentary from the international media as further indications of a grand conspiracy against Erdogan, and have closed their ranks to protect him.

Angry remarks by Foreign Minister Ahmet Davutoglu and EU Minister Egemen Bagis aimed at the international media have, however, failed to staunch the flow of negative commentary against Erdogan in the world’s most influential papers.

Writing in The Huffington Post on June 13, Stanley Weiss, the founding chairman of Business Executives for National Security, said that the demonstrations in Turkey could not be resolved by tear gas or water cannon, “no matter how much misery Erdogan’s riot police reign down on protesters.”

Indicating that “This is a battle for the very soul of modern Turkey,” he added that this battle “will ultimately determine whether the longtime NATO member and US ally will stay on Ataturk’s secular path or become a Turkish version of Egypt's Muslim Brotherhood.”

Weiss went on to say that “Throughout his career in Turkish politics, the megalomaniacal and deeply Islamic Erdogan — who has called himself both ‘the imam of Istanbul’ and ‘a servant of sharia’ — has never really hidden where he stands.”

Comparing the demonstrations in Turkey to those in Tahrir Square, Thomas Friedman of the New York Times — who was in Istanbul to follow developments  first hand — was no less critical in his column on June 18:

“The Egyptians wanted to oust [former] president Hosni Mubarak. Theirs was an act of ‘revolution.’ The Turks are engaged in an act of ‘revulsion.’ They aren’t (yet) trying to throw out their democratically elected Islamist prime minister, Recep Tayyip Erdogan. What they’re doing is calling him out. Their message is simple: ‘Get out of our faces, stop choking our democracy and stop acting like such a pompous, overbearing, modern-day Sultan.’”

Fiachra Gibbons of The Guardian followed up the same theme in his column on June 19, with the dramatic headline “Erdogan’s fall from grace in Turkey is pure Shakespearean tragedy,” and has this to say:

“Erdogan’s greatest achievement — greater still than a decade-long boom that bucked global depression — was his breaking of the power of the military that had shackled Turkish democracy for so long. In pre-Erdogan Turkey, we would have had a coup by now. Yet the power he concentrated to defeat the generals — by foul means as well as fair — and the paranoia of that battle, has undone him. In a matter of days Erdogan has become the personification of all the corrupt despotism and violence of the old Kemalist Turkey he was elected to sweep away.”

These are just three examples of a growing international chorus against Erdogan which is also being joined in by officials from organizations like the EU and the Council of Europe, as well as individual Western countries. But they are enough to show that Gul’s alarm about Turkey’s deteriorating image appears fully justified.

Gul is especially concerned about the bad turn Turkish-EU ties have taken as a result of the repressive measures against Gezi Park protesters on May 31, who were merely trying to protect trees from being cut down to make room for a shopping mall in one of the last green spots in the heart of Istanbul, adjoining the now doubly famous Taksim Square.

The disproportionate force used against peaceful protesters that day opened the floodgates on pent-up grievances against the government, leading to nationwide demonstrations and rioting. While AKP members remain defiant against domestic and international critics, Gul knows full well that Turkey’s losing its “anchor” in Western organizations like the EU, the Council of Europe or the Organization for Security and Cooperation (OSCE) will have serious costs for the country.

This is a fact that neither Erdogan nor his ministers appear willing to face up to presently. It remains an open question, however, how long they can sustain this position, especially as it becomes clearer that trying to protect Erdogan against “a grand international and domestic conspiracy” will come at a cost for Turkey’s greater interests, as the latest economic indicators and the deteriorating international image of the country have already started to demonstrate.

No wonder, then, that Gul is alarmed.