The Gul Alternative to Erdogan

Turkey’s president has positioned himself as a unifier following the Gezi Park protests. 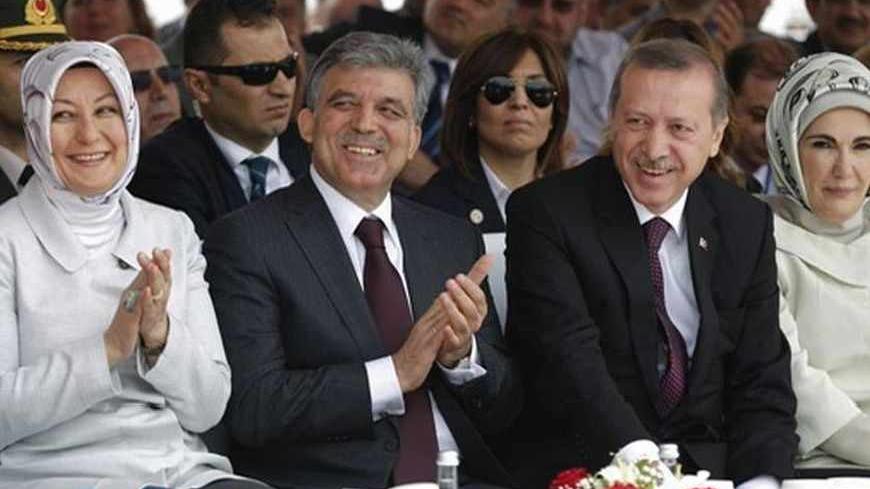 One of the questions frequently asked about balances in established politics and their future is whether an alternative could emerge from the Justice and Development Party (AKP) ranks to their hard-line leader Recep Tayyip Erdogan, and whether the balance that the opposition cannot come up with could originate from inside the AKP.

Of course, one immediately remembers the divergences between Erdogan and Turkish President Abdullah Gul, which have been going on for a while. At the root of those divergences are the personal political career disagreements between the AKP co-founders.

The contradiction originates from the Cankaya Presidential Palace calculations of Gul and Erdogan. Erdogan wants to take over the palace, but Gul does not want to leave it unless a satisfactory alternative is offered for his post-presidency.

Gul wants another term after his current tenure ends in August 2014. To realize that, he would have to participate in the elections as the sole candidate supported by the AKP and become the first ever directly elected president.

It was also known that Erdogan wants to change Turkey’s parliamentary system and move into the Cankaya Palace — where Gul currently holds office — as an executive president with more rights and powers.

Mind you, we are saying “it was known,” because Erdogan’s aspirations are not deemed attainable any longer.

Up to the Gezi Park uprising that erupted on May 31, those calculating Erdogan’s chances of taking over the Cankaya Palace in the two-round presidential elections were estimating that the prime minister will win by getting more votes than his party garnered in general elections.

After May 31, under the current conditions in the country, it is no longer realistic to expect that Erdogan will win in the first election round. Nobody can say that he will not win in the end. There is uncertainty now.

Here, we are talking of an election not for an executive president but an election for a president whose powers are defined by the existing constitution. It was well-understood long before the Gezi Park uprising that Erdogan will not be able to amass adequate parliamentary support needed for a constitutional amendment that will fulfill Erdogan’s dream of an all-powerful presidential regime.

That is why the new constitution project was postponed indefinitely. Nevertheless, Huseyin Celik, AKP spokesman and vice-chair, suggested on May 20 that the referendum for a new constitution or for constitutional amendments could be held in November 2014, after the presidential elections.

What it means for Erdogan is this: Just as his executive presidency plans are not workable, the alternative he had in mind for a "partisan president from a political party base” is not possible, because that, too, requires constitutional amendment.

If Erdogan is going to run, it will be for a neutral, non-party presidency as the one today. But it is known that Erdogan does not want to move the presidential palace and become isolated while giving up control over his party.

The formula that crops up often is for a technocrat cabinet member who will be absolutely loyal to Erdogan, and who will obey him fully to become the prime minister.

Although this formula excludes Gul — who will not be integrated into the system of governance, and who will probably be offended — he will nevertheless be the first alternative who will come to mind at the first sign of trouble.

A more positive script that could combine Erdogan and Gul could be for Erdogan to win the elections as a neutral president and for Gul to be elected as a member of parliament in a by-election, assume the role of prime minister and lead his party to general elections in 2015.

To realize this script, first we will have to assume that everything will move along smoothly and AKP votes will be enough to elect Erdogan the president in the first round of voting. Second, Erdogan and Gul will have to agree on conditions of working together. One hard fact is that Erdogan cannot treat Gul as technocrat prime minister and run the country from Cankaya Palace as a one-man show.

We were talking of a "positive script." But we cannot say the affairs of the country are on a positive track that will provide a solid foundation for positive outcomes.

Since May 31, Turkey has a new concern of societal instability. We cannot ignore the oppressive police measures Erdogan has been adopting to suppress the societal opposition, while civil society are planting more seeds of instability.

Turkey’s growth rate — already low for the past two years — is under heavy pressure from global financial market conditions that make financing of the current deficit considerably tougher.

For Erdogan in such an environment to declare that the Gezi Park protests was a plot by the "high interest lobby" to topple him — plus the growing perception that interest management in Turkey is politicized — inflicted serious damages on Turkey's image as a serious country ruled by a "market-friendly leader."

We have to foresee the possibility of diminishing direct investments from the West, as a result of a loss of confidence caused by the Erdogan factor — which in turn will magnify vulnerability.

"AKP foreign policy" — that won accolades for Erdogan until Turkey became a party to the Syrian crisis — is in a hopeless situation, collapsing on all fronts.

Under these conditions, we must expect the local elections in March 2014 to have serious bearings on the fate of the country and presidential election calculations.

It is therefore time to have a new look at the Erdogan-Gul competition in light of these realities. If you look carefully, Gul for a long time has been filling this personal career contradiction between the two with ideological issues — so far successfully.

Before the May 31 social explosion, with a narrative he consciously adopted, Gul was positioning himself with a positive approach to Erdogan’s negatively perceived policies. But Gul was always careful not to trample on the sensitivities of the AKP’s conservative base.

As much as Erdogan deviated from EU perspectives, Gul was emphasizing the importance of the EU for Turkey. Against practices restricting freedom of press in Turkey, Gul defended freedom of press. We remember that Gul had objected to some of Erdogan’s anti-democratic initiatives. For example, last November before the peace process with the Kurds — while Erdogan spoke of lifting the immunities of nine pro-Kurdish Peace and Democracy Party parliamentarians — Gul opposed him by saying that a vicious circle had to be avoided. On June 1, Gul intervened with a soothing and reconciliatory approach to Erdogan’s oppressive attitude of using excessive police power. It was not a coincidence that police forces withdrew from Taksim Square on June 1 after Gul’s meeting with Erdogan and other government officials.

On June 2 — after Erdogan left on his tour of the Maghreb — Gul, in a statement clearly addressed to protesters, said: "Democracy does not only mean elections. We received well-intentioned messages. When the time comes, necessary action will be taken."

There is a basic narrative difference between Erdogan and Gul. As much as Erdogan sticks to polarizing, extremist and irresponsible narratives, Gul emerges as moderate, responsible and as a unifier.

Erdogan is a fighter, while Gul is not. That is, Gul should not be expected to openly enter into a struggle with Erdogan to continue with his career.

But it is also true that Erdogan has lost power internally and externally; that he is on a downward slope and he is scarred.

Under these conditions, Gul with his approach has placed himself as a natural alternative to Erdogan for internal and external third parties.

While time is working against Erdogan in every aspect, Gul’s alternative value is rising without working hard for it.