Gul's return to Turkish politics may not be so easy

Abdullah Gul wants to return to politics, but dynamics are working against his taking over the chairmanship and the premiership of the party he helped found. 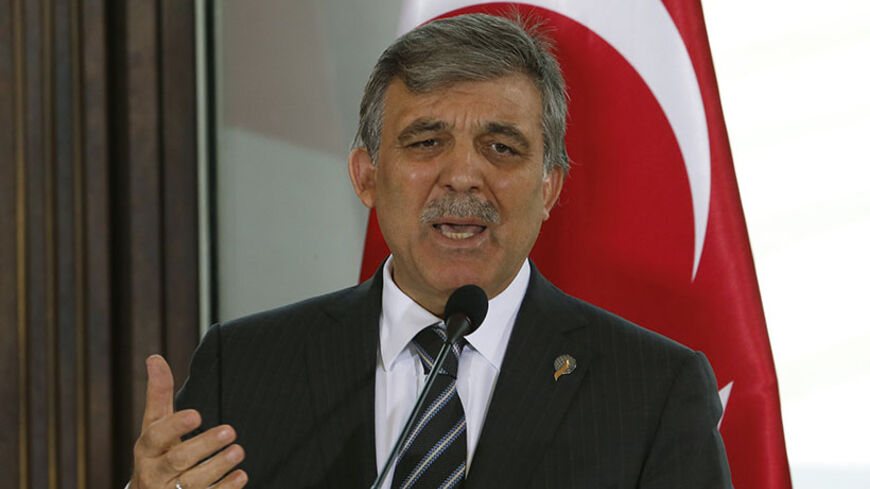 Outgoing Turkish President Abdullah Gul said on April 18, “Under the present conditions, I do not have any plans to get involved in politics.” It was a direct reference that Russia's Vladimir Putin-Dmitry Medvedev model wouldn’t be replicated in Turkey despite popular expectations. “I don’t believe that it is a practice befitting a democracy,” Gul said then. But Gul recently changed his mind and announced his return to the Justice and Development Party (AKP) and to active politics, which raised expectations again of a potential Gul premiership.

So what changed Gul’s mind, and why did President-elect and outgoing Prime Minister Recep Tayyip Erdogan take extreme steps to avert this possibility?

Gul’s April statement came in the aftermath of the 2013 Gezi Park protests. He was critical of the excessive use of force by police. That put him in direct contrast with Erdogan, who expressed pride in the police and accused foreign powers and a mysterious "interest rate lobby" of being behind the protests.

Gul also differed from Erdogan in his reaction to the graft probe that surfaced in December 2013. In what appeared to be the country’s most massive bribery and corruption scandal ever, Erdogan claimed that all accusations putting his government under a criminal spotlight were fabricated and the work of US-based Sunni cleric Fethullah Gulen and his followers. The Turkish media reported that the president-elect has made it a priority for the incoming premier to fight against the parallel state. On that note, analysts in the Ankara beltway told Al-Monitor that Erdogan was unhappy with Gul, who took a more balanced approach in prioritizing the rule of law rather than dealing a blow to Gulen followers.

Those are not only those differences between the outgoing president and the incoming one. Gul sharply opposed Erdogan’s decision in March to ban access to Twitter. Erdogan had said at the time, “I don’t care what the international community says at all. Everyone will see the power of the Turkish Republic.” Gul actually broke the ban, tweeting that the “shutdown was unacceptable.”

So, what changed with Gul? Ozgur Unluhisarcikli, the German Marshall Fund’s Ankara office director, argues that Gul has not contradicted himself by announcing his return to active politics. “He said he did not have any political plans 'under current conditions,' which meant that he would refuse to become a prime minister under a de facto presidential system where he would be expected to devolve powers to the president,” Unluhisarcikli told Al-Monitor. “His recent announcement that he plans to return to the [AKP] is not necessarily a contradiction with this previous statement, as it is unlikely that he will be the prime minister of the de facto presidential system period.”

Gokhan Bacik of Ipek University's International Relations Department believes Gul’s decision is based on “ideological” reasons and his belief that the country is not well governed. Bacik told Al-Monitor, “The election law makes it an obligation that any new party be established six months in advance of an election it wants to participate in, and that it has to establish its branches all across the country. Gul does not have this time.” He added, “The key, though, is how persistent Gul will be in taking an active role in the politics of the era of his post-presidency. If he comes back with a determined manner, they [Gul followers] will find a way.”

Erdogan, however, seems to have trapped Gul into a passive role in the party. While Gul followers continue to quietly complain about Erdogan’s neglecting to express gratitude for Gul’s service to the party and the country, they are also surprised that Erdogan chose to move ahead without him. Yalcin Akdogan, AKP Ankara deputy and one of Erdogan’s close confidantes, told Turkish media Aug. 17 that whoever the party elects as chairman on Aug. 27 will become prime minister and take the country to the next general election, scheduled for 2015 (although the vote could be moved up). Under those terms, if Gul decided to stay with the party, he would have no chance to seek the premiership until 2019. “It would be unjust and rude to treat the new chairman as being temporary,” Akdogan said. “Erdogan is assuredly an experienced politician. His political wisdom has helped solve many problems. He, too, would not want to be involved in a solution that would fail in the first election.”

Erdogan insists on not backing away from the party's rule that no elected official can run for the same office more than three consecutive times. That will block 71 AKP deputies in the current parliament from running in the coming election. Economy Minister Ali Babacan is one of them, and some party insiders close to Gul express worry that they wouldn’t be able to get through a potential upcoming economic crisis without Babacan being fully in charge. While Erdogan is expected to announce the party’s next chairman on Aug. 21 and Foreign Minister Ahmet Davutoglu seems to be the most likely candidate for taking over the party chairmanship and the premiership, the new names to succeed 71 outgoing AKP deputies on the ballot in the next election will be equally controversial.

Some analysts who asked that their names not be revealed told Al-Monitor that the new list will be dominated by those who are more affiliated with political Islam, breaking a direct link with the AKP’s first years as a coalition party. But will that bring Erdogan victory — with at least 330 seats, enough to change the constitution, in the next parliament? Or, if Erdogan's predictions fall short, and he is unable to legally shift the country’s parliamentary system into a presidential one, how would that impact his presidential term and Turkish politics? This latter scenario takes into account not only the possibility of a weak AKP single-party government, but also of a coalition government.

“If the worst happens, Gul will most likely consider setting up his own party after the 2015 elections,” Bacik said.