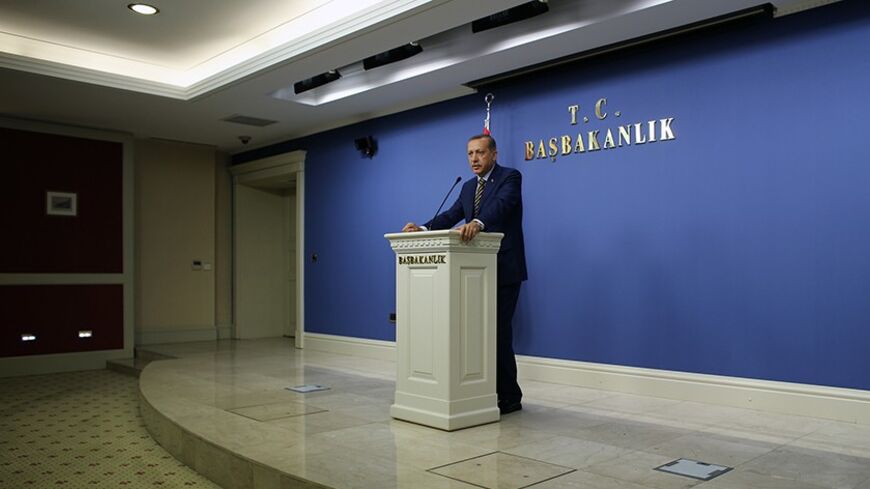 A massive corruption probe has been rattling Turkey since Dec. 17 when prosecutors moved to make the first arrests. By now, the government has dismissed all the prosecutors who initiated the probe, along with all police officers who did the investigating. Hundreds of other prosecutors and judges and thousands of police have lost their original posts in a nationwide reshuffle. Laws and regulations have been amended. A media blackout has been imposed on the probe. The justice minister has sent back prosecution reports incriminating ministers, instead of passing them to parliament for further action. In short, the probe has been blocked.

Yet, documents from the investigation files continue to leak out. Wiretaps end up in the media on a daily basis. Opposition leaders have laid hands on the prosecution reports the justice minister returned, trumpeting their content from parliamentary rostrums.

Among other revelations, the leaked documents have provided a striking illustration of how censorship works in Turkey and raised alarm that the problem of media ownership is far more serious than it was thought.

The wiretaps from the investigation files are being posted online by a group using the nickname “Haramzadeler” or “Illegitimate offspring.” Each time its posts are blocked, it moves to a new web address and continues publishing the corruption “archive.”

One of the wiretaps reveals a call Prime Minister Recep Tayyip Erdogan made to the Haberturk news channel soon after the Gezi Park protests erupted last summer. The recording suggests that Erdogan — calling all the way from Morocco while watching the channel — was irritated by a news ticker reporting remarks by the opposition Nationalist Movement Party (MHP) leader. Shortly after Erdogan’s conversation with Haberturk executive Fatih Sarac, the channel removes the news ticker.

In another leaked recording, Erdogan calls Haberturk again — this time to chide it for airing live a speech MHP leader Devlet Bahceli is making in parliament. Haberturk ends the broadcast immediately.

A third recording reveals the prime minister was unhappy with a report in Haberturk newspaper critical of health services. The article — headlined “Is this Turkey’s new age in health care?” — recounts the plight of a sick toddler denied proper access to medical care. Erdogan tells Sarac that the report does injustice to government efforts to improve health services. Following the call, three journalists involved in writing and editing the report were fired.

In the past several years, Haberturk has followed an editorial policy sympathetic to the government. Its owner, the Ciner business group, has won public tenders in the energy and mining sectors.

The media bosses’ business activities outside the media sector have long been the subject of controversy in Turkey, with critics charging that lucrative contracts awarded by the government jeopardize press freedom. The leaked wiretaps come as a striking confirmation of all those concerns.

Other revelations, however, suggest that Erdogan’s control of the media may extend far beyond his control of media bosses. Kemal Kilicdaroglu, head of the main opposition Republican People’s Party (CHP), on the basis of the prosecution report against former Transport Minister Binali Yildirim, alleged in parliament that the actual owner of Turkey’s media giant Sabah and the ATV television was the prime minister. Citing the charges in the document, Kilicdaroglu said that several businessmen, winners of major government tenders, were asked to put money in a “pool” set up on Erdogan’s orders to raise funds for the acquisition of the Sabah-ATV group. Acting on Erdogan’s instructions, Yildirim allegedly collected $630 million in the pool, according to the report.

Here's a summary of the allegations stemming from the report: The businessmen who put money in the pool represent the companies that were awarded the tender for Istanbul’s third airport and high-speed train projects. It all started on July 21 when Erdogan met with the owners of the Kalyon business group in his home in Istanbul’s Camlica district, where a decision was made for the company to take over Sabah-ATV. But since the company lacked the financial means for the purchase, businessmen who had been awarded public tenders were asked to pool money.

Kilicdaroglu said no one from Sabah-ATV’s then-parent company, Calik, was present at the meeting and takes this absence as an indication that Calik was the owner only on paper, with Erdogan himself being the real owner. Calik’s acquisition of Sabah several years ago was itself controversial. To make the purchase, the company allegedly got a loan from Halkbank, a public bank whose manager has been arrested in the corruption probe, but then struggled to make back payments. Hence, Sabah-ATV was transferred to the Kalyon business group, using the money pool.

The companies, which put money in the pool, stand out as the winners of all large-scale public tenders in recent years. Wiretaps of conversations between the businessmen themselves have also hit the Internet. The exchanges suggest that some of them are in serious anxiety over the requested sums as others — apparently seasoned contributors to such money pools — try to comfort them.

The claim that the prime minister himself owns Sabah-ATV has taken the press freedom controversy in Turkey to a level no one had imagined.

If true, the charges outlined in the prosecution report and publicized by the main opposition leader would mean that Erdogan personally acquires and manages some media outlets, while controlling others by awarding public tenders to their bosses or bullying them into submission through vindictive tax inspections.

The Sabah-ATV story is, in fact, the story of how ever-troubled press freedoms in Turkey have descended into their current pathetic state, revealing how Erdogan tamed and subjugated the media. Let’s see what other truths the corruption probe will lay bare.