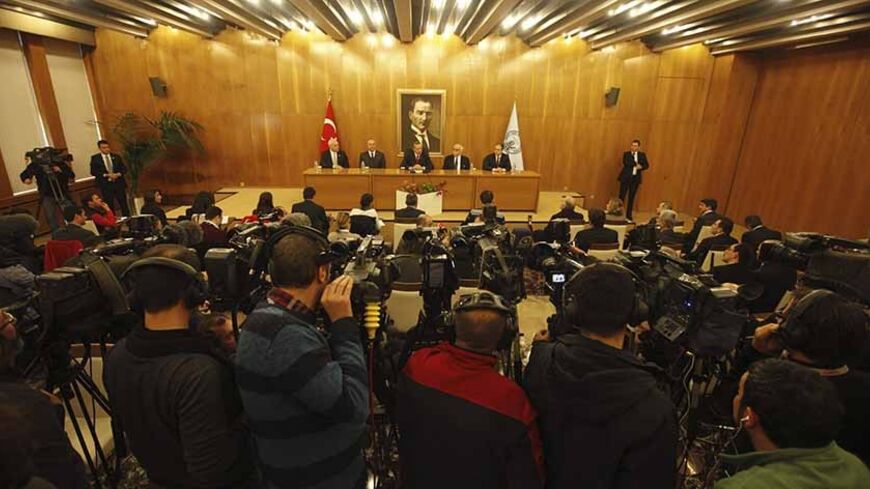 Turkish Prime Minister Recep Tayyip Erdogan is a straight-talking man. “I did call the Haberturk executive from Morocco in June,” he acknowledged on Feb. 11, “simply to remind them” that the opposition Nationalist Movement Party (MHP) leader Devlet Bahceli’s criticism of the government ignored all the good things that he, Erdogan, has done. “Those to whom I made the complaint regarding the insults that appeared on the news ticker made the necessary correction. We do the same with other media bosses if there are any insults to our government. Either my colleagues or I give them a call to bring such insults to their attention. I told them that we’re now in Morocco. If it’s wrong to say such a thing, I don’t know about it. But we need to teach these things. Because those insults were nothing but ordinary.”

In a wiretap leaked on Feb. 9 via the Internet, Erdogan was talking to Fatih Sarac, an influential member of the executive board at Haberturk, who sounded like the “yes man” to all things that the prime minister said without any objection, and immediately promised to take off the news ticker. Whatever offended Erdogan by Bahceli’s remarks may be debated, but the MHP leader was calling on President Abdullah Gul to do his duty and help calm the Gezi Park protesters. In the Ankara beltway, the rumors were that the prime minister had even smashed an iPad when Gul made conciliatory remarks to the crowds in the streets trying to exert their right to civil disobedience to keep one of the last remaining green spots in the heart of Istanbul.

That aside, the point is that Erdogan’s perception of democracy is problematic. Otherwise, he would have taken a calmer approach when television channels broadcast an opposition party leader’s speech. Erdogan, however, is growing more and more irritated by any criticism. His personal irritation with the media and desire to control everything is raising as an obstacle before people’s right to access to information, which is a cornerstone of any democracy.

Privately owned Haberturk’s submission to Erdogan reveals that it is not only the prime minister who was wrong. Media bosses and executives are equally if not more responsible for the deteriorating freedoms of speech and media in the country. Still, this leaked wiretap of a telephone call between Erdogan and Saracli allows us the opportunity to say it with evidence — not with speculation any longer — that the Turkish media’s executives choose to side with power instead of principles. In another leaked wiretap, Saracli called Erdogan’s son Bilal to express how he “feels sad when the prime minister gets disappointed”! Bahceli is an elected member of the Turkish parliament, and MHP has won more than 10% of the nationwide vote to be represented in this legislative body. As much as Erdogan may have a problematic perception of what democracy is, Saracli’s understanding of journalism is just as dubious.

Such media ownership has always helped to keep Turkish democracy weak. This is not happening for the first time since Erdogan came to power more than a decade ago. It is just that Erdogan is a street-smart politician, and when he sees weakness, he uses it to suit his interests without restraint. The media owners nourished this environment, though. All of them make their profits from state tenders and increase their media holdings by favoring the government. One may in fact be surprised which side of the equation is more influential in pushing for censorship over their reporters — the media owners/executive editors or the government.

The issue is not that all the media has become pro-government, but that partisan media has taken over the country’s discourse, which only makes it more difficult to build consensus over key issues in the country. Put simply, the nation's narrative becomes poisoned.

The government is certainly exerting its power by all means to prevent the media from covering the corruption scandal. “In mid-January, the Radio and TV High Council (RTUK) issued a warning to eight TV stations — Samanyolu TV, Bugun TV, Kanal Turk, MTV, Cem TV, Sokak TV, Halk TV and Ulusal Kanal — for “violating the presumption of innocence” in their coverage of the corruption scandal that has rocked the government. Two of the stations — Samanyolu TV and Bugun TV — are regarded as allied with the religious movement led by Fethullah Gulen,” Reporters Without Borders reported on Jan. 17. “RTUK members appointed by the opposition CHP [Republican People's Party], BDP [Peace and Democracy Party] and MHP parties opposed the measure on the grounds that coverage of the case was in the public interest and that similar coverage in other leading political cases such as the Ergenekon trial had never been sanctioned. Their objections were overruled by the RTUK majority appointed by the ruling AKP.” It's worth remembering that Zaman and Today’s Zaman, the Gulenist papers, were in a relationship of convenience with the government during the days of the Ergenekon trials. They have also taken an attitude of convicting the military personnel from day one without being concerned with any libel issues — ignoring the defense lawyers' statements showing the evidence that led to the conviction of their clients was forged.

In sum, both sides — the government and media ownership — have contributed to the poor state of the media in Turkey. Reporters Without Borders, for example, ranks Turkey 154th in the world (of 180 nations) for press freedom and cites serious concerns.