Turkish Prime Minister Recep Tayyip Erdogan’s personal call to a TV station to immediately stop a news scroll reveals the extent of the restrictions on press freedom in Turkey. 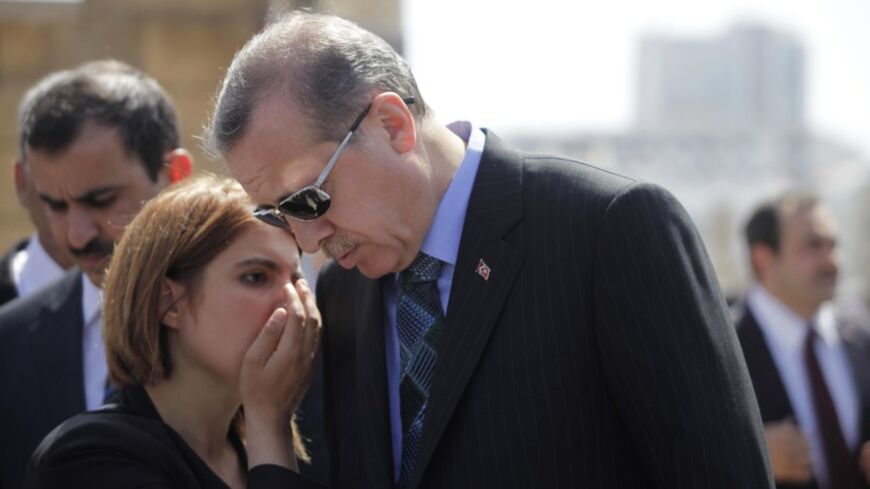 Turkish Prime Minister Recep Tayyip Erdogan arrives at Rabat-Sale Airport at the start of a tour of the Maghreb region, June 3, 2013. The next day, he would make a fateful call to a Turkish TV station after he saw a news feed he did not like. - REUTERS/Youssef Boudlal

Freedom House, a respected Washington-based nongovernmental organization, on Feb. 3 released the special report “Democracy in Crisis: Corruption, Media and Power in Turkey” focusing on government pressures and restrictions on the freedom of media in Turkey. Freedom House said a team visited Turkey in November 2013 to meet with journalists, civil society, business world leaders and upper-level government officials. The report says that the government in the last seven years has been restricting freedom of media through intimidation, imprisonment and wiretapping. Thanks to intimate interest relationships with media bosses, firings are used extensively as tools of intimidation and punishment.

The natural outcome of these pressures is a suffocating self-censorship and censorship atmosphere that prevents the Turkish media from performing its basic function of informing the public accurately and objectively.

The report says: “Editors and journalists in the mainstream media say that they receive regular phone calls from the prime minister’s office to change stories, to downplay coverage, or to fire reporters or columnists.”

“A free press is a vital actor in any democracy, providing accountability and encouraging a healthy public debate. In Turkey, with a weak opposition and judiciary, an unfettered press is essential. The muzzling of the press in the last seven years has contributed to the wide disjuncture between citizens and their government. It is both a symptom and a cause of the current crisis,” Freedom House says.

The Turkish public finally learned in February 2014 what journalists were complaining about three months ago in their meetings with Freedom House about the reality of “censorship calls from the prime minister’s office.”

Sadly, we owe this enlightenment to the transformation of the AKP-Gulen Movement [Cemaat] strife to all-out warfare with the Dec. 17 operations that targeted major and grave government corruption.

In a voice recording that was released via the Internet, we learned that on June 4 Prime Minister Recep Tayyip Erdogan — who was in Morocco for an official visit at the peak of the Gezi Park protests — was watching the Istanbul-based Haberturk TV channel. When he saw a bottom-of-the-screen news scroll quoting Devlet Bahceli, the leader of nationalist opposition Nationalist Movement Party (MHP) an angry Erdogan personally called the TV channel’s director, Fatih Sarac, and got the scroll removed.

It is claimed that this recording was made by a “legal wiretap” related to corruption investigations at the time. Whether we accept this as correct, what is illegal and improper is to leak this evidence from the investigation to the Internet to use as ammunition in AKP-Cemaat clashes.

Nevertheless, there is nothing to debate about how Erdogan disregarded the people's right to know by personally calling TV directors. Therefore, whether the leaking of the voice recording is legal or not does not have much significance given its high importance in keeping the public informed.

The voice recording is extremely interesting for showing how natural and at ease the prime minister was in his censorship intervention, and how his interlocutor TV director accepted the prime minister’s words as an edict. Here we must note that Sarac is known as a manager close to the government.

The scroll that enraged the prime minister was running an excerpt from Bahceli's talk to his parliamentary group. It said Bahceli has called on President Abdullah Gul to intervene in the crisis that erupted with the Gezi Park protests. The call by Bahceli was carried by many other TV channels and websites.

In the voice recording, Erdogan, before talking to Sarac at Haberturk, is heard talking to people around him: “These people are something else. You have to call them one by one and talk.”

The prime minister tells Sarac: “Fatih, look, I am now watching TV in Morocco. The speech of Bahceli is on and now it is also scrolled. The scroll says, 'The first duty of the president is not to hold discussions but improve the situation and take the steps to calm down the country. …' This is what Bahceli said and now it is on a scroll.”

To every remark of the prime minister, Sarac answers, “Yes, yes, OK sir, I will get to it right away, sir.” Erdogan says, “You must do it immediately,” and Sarac answers, “I am doing it now, right now, sir.”

Then we hear Sarac calling news editor Abdullah Kilic to carry out Erdogan's instruction to censor Bahceli’s talk, saying: “The prime minister doesn’t want to share his prerogatives and power.”

That tells us why the prime minister was angered by Bahceli’s remarks. Erdogan did not want Gul to intervene in the Gezi crisis and to use his own power and authority as he saw fit in this affair.

When Erdogan went on his Maghreb tour, leaving behind a country almost set on fire because of the Gezi crisis, Gul was sending calming messages empathizing with Gezi protesters.

A day before Erdogan’s phone call to the Haberturk director to censor Bahceli’s remarks, Gul had said, “Democracy does not only mean elections. There can be nothing more natural than expressing divergent views, ideas and objections through various means other than elections. Peaceful demonstrations are one such way. I see the developments of recent days in this framework. … I want people to know that these well-meaning messages have been received.”

Erdogan is known as a manager who wants to control the entire process personally, at the micro level. His censorship reaction to the possibility of Gul assuming a constructive role in the Gezi crisis is one example of his micromanagement. To censor a minor news scroll on a TV screen, he calls a TV manager close to him from the westernmost end of Africa.

Then we found out that it was not only on June 4 that Erdogan personally called Sarac to censor a news report. According to another voice recording that appeared on the Internet on Feb. 8, on June 14 the prime minister again called Sarac to ask Haberturk to cease live transmission of a press conference by Bahceli that was being aired live by many other channels. The transmission was cut off.