Turkey’s media manipulation: from denial to 'so what?'

All Turkish actors, from the government to the media to religious groups, need to recognize their limits to avoid the trend toward an illiberal society. 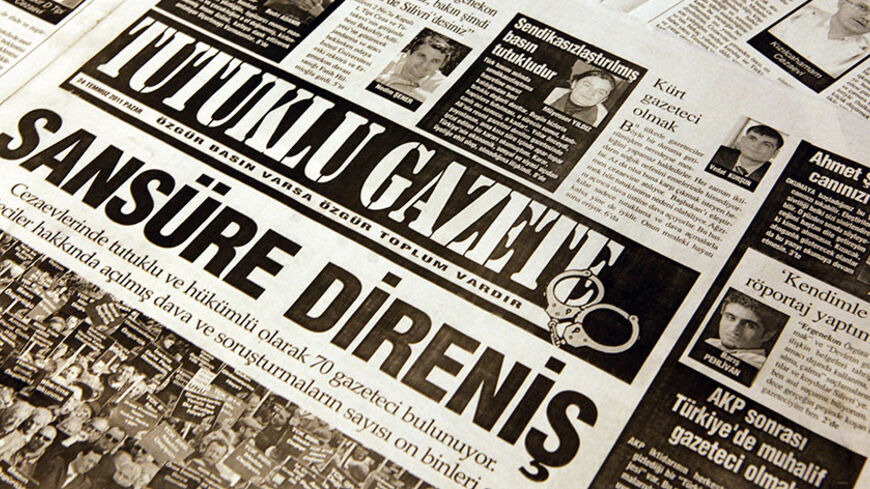 The headline of the newspaper reads "Resistance against censorship" in this photo illustration, Istanbul, July 25, 2011. - REUTERS/Murad Sezer

In the past couple of years, the ruling Justice and Development Party (AKP) in Turkey has routinely been criticized for putting pressure on the media. Both at home and abroad, journalists have complained that the government, especially the inner circle of Prime Minister Recep Tayyip Erdogan, tries to manipulate newspapers and news channels for their own political benefit. A May 2013 report by the Center for American Progress, for example, noted that there is “direct pressure on owners of news outlets from government officials and more subtle forms of self-censorship from editors and journalists afraid of dismissal.”

The response of the government to these allegations has often been silence or denial. The latter has come particularly from Yalcin Akdogan, an AKP deputy and close adviser to Erdogan, in his articles and tweets. For example, he wrote in 2013 that the government is certainly not engaged in any “pressure, control or intervention” with regard to the media.

However, things have changed dramatically in the past few weeks. First, undeniable evidence of media manipulation was publicly exposed. As a response, the prime minister shifted his stance, and instead of saying that there is no intervention in the media, he acknowledged some intervention, but then argued that there is simply no problem with the practice.

Here is the more detailed story. What exposed the hidden relations with the government and the media are a series of wiretapped phone conversations that were posted online earlier this month, and listened to by millions of curious Turks. The central figure was Fatih Sarac, a conservative businessman with very close links to Erdogan and the ruling party. In 2012, however, he suddenly became the executive director of Haberturk, a top mainstream newspaper, and Haberturk TV, the news channel of the same company. In various phone calls, Sarac is heard reprimanding his subordinates, such as Fatih Altayli, the editor-in-chief of Haberturk, for broadcasting or publishing news that displeased the government.

For example, in one of the wiretapped conversations, Altayli is questioned by Sarac on a Haberturk story about an infant who was born with serious defects due to doctors’ mistakes and died soon after the story went to print. “So much for a Turkey that claims to have had a revolution in health,” read the headline. That very day, Altayli received the call on why he allowed such an “unfair” headline. Soon, the reporters and editors responsible for the story, three people, were fired.

These conversations were wiretapped by the police with a court order. But their uploading to the Web for public consumption, most probably by the same police officers, also implied a political motivation and not just a legal investigation. That is why most Turks considered these wiretaps the work of the “parallel state” that Erdogan has been condemning.

After these exposures, on Feb. 10, Altayli appeared on a show on CNNTurk hosted by journalist and TV host Cuneyt Ozdemir. In a very anxious and defensive mood, Altayli confirmed the truth of all the exposed conservations, stating that the Turkish government indeed “rains instructions” on his newspaper and the rest of the media. He defended himself by saying that he “resisted” these pressures as much as he could, and that he is not the only one who had to bow down to some of them.

“Today, the dignity of journalism is being trampled underfoot,” Altayli said. “Every day, instructions rain down from somewhere. Everyone is scared.”

The most crucial of the exposed phone conversations was not related to Altayli, but his superior, Sarac, and Sarac's superior, Erdogan. Apparently, Erdogan, during an official visit to Morocco, saw a scene on Haberturk TV that annoyed him: a news ticker reference to a statement by Nationalist Movement Party leader Devlet Bahceli at the height of the Gezi Park resistance last June. In the ticker, Bahceli called on President Abdullah Gul to “do his duty” and intervene in the Gezi Park protests. Then, Erdogan is heard on the phone angrily telling Sarac that the ticker should be pulled immediately. Sarac says, “Yes sir, I apologize,” and hastily makes calls to editors at the station to immediately stop broadcasting Bahceli’s remarks.

And what was Erdogan’s response to this? Several days after the exposure, in a press meeting on Feb. 11, Erdogan said, “About the phone call from Morocco, yes indeed, I called. I only made some reminders. And those individuals to whom I conveyed the reminders regarding the news ticker did what was necessary. … When such insults are made, I or my friends call to tell [newspaper executives] … I don’t know if it is wrong [telling them] this. But we have to teach such things because the insults that were being made were not ordinary.”

This frank statement by Erdogan means that he indeed does not see any problem in “reminding” and “teaching” the media how to do its job. In other words, it means that, in the eyes of the prime minister, the fact that he is a democratically elected leader gives him the right to use the power of the “national will” over areas that are considered autonomous in liberal democracies.

Ali Bayramoglu, a prominent Turkish intellectual who defended Erdogan in his most troubled years, described this problem well in his column in Yeni Safak, a staunchly pro-Erdogan newspaper. He, as I quoted before, observed, “The prime minister not only accepts that culture, sports, media, universities and even knowledge has an autonomy defined by their internal dynamics but he also intervenes in all these areas, even in the level of 'micro-management' and according to the principle of affinity and loyalty. Therefore, not the institutional decisions of the government but the personal opinions and values of the prime minister tend to spread to all these areas. The result is a scene of 'total power' and a 'personalization of the state.'”

Of course, this constant encroachment of personalized state power into areas that need to be autonomous to be effective creates reactions, some of which are excessive as well, to which Erdogan responds only with more assertiveness. The result is a vicious cycle of endless power struggles. The Gezi Park protests of last summer were a symptom of this problem. Erdogan’s current war with the “parallel state” — which is not totally mythical, as we understand from these wiretapping wars and other clues — is another one. In a society where every political actor, beginning with the prime minister, seeks total power, peace of mind proves impossible.

With all these bitter facts, including the frank “so what?” attitude of the government with regard to media manipulation, Turkey proves to be far from a liberal democracy and looks more like an illiberal one, as I warned before in Al-Monitor. To move on, every actor in society, from the government to media to religious groups, need to recognize their limits. To learn those limits, however, it seems that all will need to get more bruises in the vicious power struggles of the day.