How Did Turkey Lose Egypt?

Statements by Turkish Prime Minister Recep Tayyip Erdogan on the coup in Egypt have set back Egyptian diplomacy and popularity with the Egyptian street. 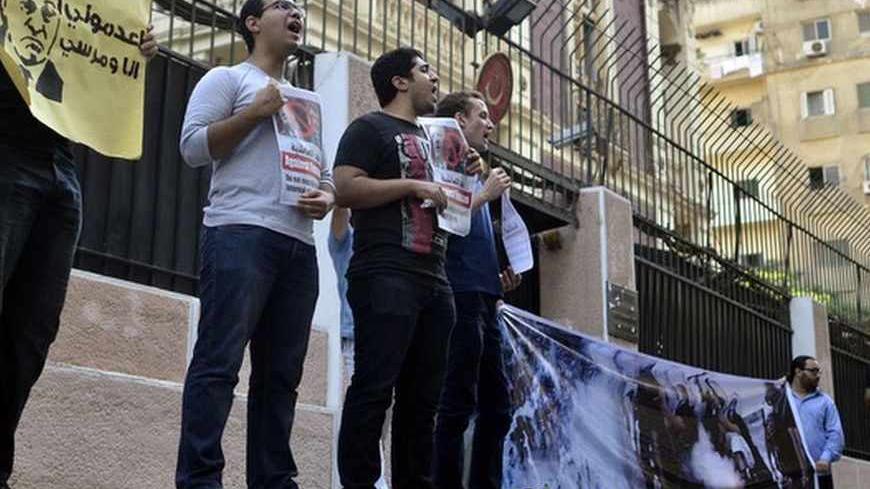 Some Egyptians have found the easy way out. To avoid arguing with contrarian interlocutors whether the removal of the Muslim Brotherhood from power was a coup, a military intervention or a revolution, they simply say "July 3" and leave it up to you to attribute whatever characteristics you wish to affix to it.

But there are times when the "July 3 formula" will not work — relations with the Justice and Development Party's (AKP) Turkey is just such a time, as the Islamist AKP government in Ankara has no compunction when assessing the relations between the two countries in the context of preserving significant mutual interests, and as such, avoid arguing with the new military rule.

AKP representatives, led by Prime Minister Recep Tayyip Erdogan, are not content with labeling the July 3 change of power in Egypt a coup. AKP's Turkey feels that the coup was against its own principles and identifies fully with the Muslim Brotherhood. This is why the AKP's reactions to developments in Egypt turned out to be disproportionate and excessively harsh. AKP’s indignation with the coup produced a counter-reaction from a large segment of the Egyptian population and new administration which are opposed to the Muslim Brotherhood.

As a result, we end up with a crisis in bilateral relations, best explained by finding out where the ambassadors to Ankara and Cairo actually are now.

The Turkish government recalled its Cairo ambassador, Huseyin Avni Botsali, on Aug. 15 for "consultations" following the bloody suppression of the Muslim Brotherhood protests at Cairo’s Rabia al-Adawiya Square. Obviously, this was a protest move by Ankara. A day later, Egypt, adhering to the custom of reciprocity, recalled its Ankara ambassador, Abdelrahman Salaheldin, for the same reason. But unlike Botsali who returned to Cairo on Sept. 5 after completing his "consultations in Ankara," Salaheldin was not sent back to Ankara as expected.

Egypt’s Ankara ambassador was continuing his "consultations" in Cairo during the visit of the Republican People's Party (CHP) delegation to Egypt from Sept. 9 to 11.

I had the opportunity to observe this crisis from the Egyptian side when I was covering the visit of the main opposition CHP. The CHP delegation, made up of two former prominent Turkish diplomats — Faruk Lologlu, CHP vice chair, and Osman Koruturk, Istanbul deputy — came to Cairo to meet with Egyptian government representatives, as well as religious leaders, to explain that "Turkey is not only the AKP" and to contribute to a restoration of relations.

According to figures provided by Turkish diplomats, the volume of trade between Egypt and Turkey has boomed by an amazing 900% over the past five and a half years, reaching $5.9 billion. Around 480 Turkish companies have invested $2 billion in Egypt. These figures alone are enough to indicate the importance of bilateral relations. It is beyond debate that bilateral relations cannot be sustained in a constant state of crisis as the the AKP makes a point of its objection to the overthrow of the Muslim Brotherhood.

The CHP team’s first meeting on Sept. 10 was with Egyptian Foreign Minister Nabil Fahmy, after which we had a chance to meet with Egypt’s Ankara ambassador Salaheldin.

The ambassador responded to my questions regarding the reasons preventing his return to Ankara, published in a full interview in Milliyet.

Al-Monitor: Turkey’s Cairo ambassador Botsali is here. Why aren’t you in Ankara?

Salaheldin: In diplomacy if an ambassador is recalled for consultations, that truly means he was called back for consultations. Second, it is signal of displeasure with the host country. I must emphasize how important are our relations with Turkey. But when you talk to Egyptians in the street you will notice a negative image of Turkey. Egyptians are unhappy with declarations they hear from Turkey. There are now calls to boycott Turkish products.  The business world is under the pressure of a boycott. This is the first time I am seeing such a situation.

Al-Monitor: Are you hoping to return to Ankara soon?

Salaheldin: I am working on going back to Ankara. But ambassadors serve their governments. At the moment the government is under heavy pressure of the public against Turkey.

Al-Monitor: Are you awaiting a goodwill gesture from Turkey to return?

Salaheldin: Of course the government is waiting for a goodwill gesture from Ankara. It would have helped a lot.

The Egyptian ambassador to Ankara's response to a question on how and why the image of Turkey has become so negative crystallized the views of the anti-Brotherhood political actors the CHP delegation met in Cairo:

I asked Salaheldin if there was no difference at all with the army playing the same role against a dictator in 2011 and against an elected president in 2013. His reply was:

"In 2011, people came out to streets and called for free elections. In 2013, people against went out, but this time asked the elected president to listen to the people, to change the government and to amend the constitution he crafted without the consent of the people. They all wanted the same thing: Not [Mohammed] Morsi’s resignation, but early elections. Morsi did not react positively because he knew he had lost popularity and legitimacy and that he would lose in the elections. 2011 and 2013 were two similar events. The only difference is in 2013 you have the Muslim Brotherhood. Turkey has to show that it is the friend of the entire Egyptian people. The issue is about standards. Here we are talking of a country that is treating the similar situations of 2011 and 2013 differently.”

The most important grievance the CHP team heard from their Cairo contacts was Prime Minister Erdogan's comments regarding the grand imam of Al-Azhar, Sheikh Ahmad al-Tayyib, who is accepted as the highest ethical and religious authority of the country, because he had supported the coup.

In Cairo, we noted how the politicians and transition government officials who see July 3 not as a coup, but as "the army taking the side of growing popular movement against Muslim Brotherhood to prevent a civil war," and how they perceived Erdogan’s remarks about the Al-Azhar sheikh as an insult that requires an apology.

In an Aug. 25 speech delivered in the eastern Black Sea town of Rize, Erdogan said: "Man of learning should not stand at attention and say, 'As you command, Sir.' I was saddened when I saw the sheikh of Al-Azhar, one of the most prominent universities of the world, standing with the coup and its makers. How is that you, as the sheikh of Al-Azhar, one who heads the Al-Azhar ulema, could applaud the coup? Can that be praised and accepted? This is where learning ends. That is the end of that man of learning.’’

The CHP team was received on Sept. 11 by Sheikh Tayyib of Al-Azhar. We learned that in the meeting, which was closed to the media, the sheikh reacted constructively and moderately to Erdogan’s words, saying: "What happened in Egypt had the support and the will of the majority of Egyptian people. Al-Azhar is a suprapolitical institution that serves religion and humanity. If Al-Azhar adopts a position about an event, it does that because of its national identity, not because it is taking a political position. Turkey-Egypt relations have historical depth. Declarations made by some politicians because of a change in political atmosphere won’t affect the relations between peoples."

The CHP team also met with Amr Darrag, former minister of planning and international cooperation under Morsi, and Mohammed Ali Beshr, former minister of local development. In the meeting, Darrag said he doesn’t approve of the resulting crisis in bilateral relations and the reactions from Egypt to Erdogan’s strong position against the military coup. He said, "Whatever the political situation may be in both countries, relations have to be good because they are important for the welfare and stability of the entire region. Just as we are not happy with what has happened in Egypt, we are also not happy by the deterioration of relations between the two countries."

All Turks we spoke to in Cairo, whether journalists or official functionaries, confirmed that Turkey faces a serious image problem with the major segment of the population because of the Turkish government’s position following July 3.

If you ask us, Erdogan’s image is the most affected. The Turkish prime minister, who was assumed to have won over the "Egyptian street" with his anti-Israel policies during the Hosni Mubarak reign and his support of the January 25 Revolution, is now facing the same street with anti-Erdogan sentiments.

This only goes on to show how the ground gained by "street politics" in the Middle East can be become instantly slippery with changing conditions.