People are scrutinizing moves by the Egyptian government and military for possible connections to the upcoming presidential elections. 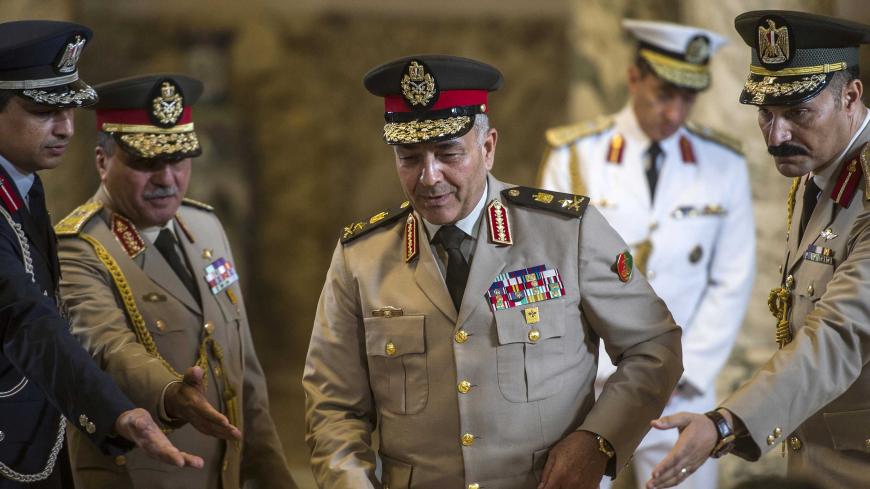 CAIRO — Many citizens, experts and observers are wondering if Egyptian President Abdel Fattah al-Sisi's security reshuffling in October was related more to the war on terrorism or to his apparent competition with potential rivals in the upcoming elections.

One week after militants killed at least 16 policemen (The Associated Press reported 54) in Giza province in October 2017, the Interior Ministry gave several high-ranking officials the boot. Sisi named a new top military leader, replacing Lt. Gen. Mahmoud Hegazy as armed forces chief of staff and appointing him instead as presidential adviser of strategic planning and crisis management. Some people attributed the change to the continuing violence, but since then there's been a lot of speculation about why Hegazy was replaced.

One theory is that the armed forces were (and continue to be) preparing Hegazy to replace Sisi in the 2018 elections in case Sisi doesn't run for a second term.

Opposition journalist Musa al-Otaibi highlighted such a possibility, among others, in a report published Oct. 29 on The Lens Post website. “Because nothing is impossible in politics, observers say Hegazy’s referral was arranged by both the junta and Sisi in order to keep [Hegazy] away from the political conflict arena and then have him serve as a possible political alternative in the event the situation degenerates for the worse in the country. The current period is witnessing a growing public discontent against Sisi, given the worsening economic and security conditions plaguing the country,” Otaibi wrote.

Baseera Center for Public Opinion statistics for January 2017 reflected Sisi’s decreasing popularity since he adopted economic reforms — mainly floating the Egyptian pound and lifting fuel subsidies in November 2016. Sisi’s popularity stood at 27% then, compared with 32% in 2015 and 54% in 2014.

Some observers believe someone with a military background might be able to replace Sisi or compete with him in case no other person submits his candidacy. The pro-regime media has been leading harsh campaigns against potential rivals in the upcoming elections, such as former Prime Minister Ahmed Shafiq. Shafiq was accused of conspiring against the Egyptian regime with the Muslim Brotherhood and the Qatar-based Al Jazeera channel.

Otaibi continued in his report, “Hegazy might also be prepping for the premiership, as pro-regime media outlets started saying that the next prime minister will be a military figure and that Sisi is considering dismissing Prime Minister Sherif Ismail from his position because of his illness that requires him to travel abroad for treatment.”

Asked whether Hegazy could serve as a pro forma competitor to Sisi in the 2018 elections, freelance opposition political and media journalist Ahmed Sami told Al-Monitor, “Over the past few months, many high-level military and media leaders have been replaced [by people close to the regime] in a way that affects the 2018 presidential elections. The evidence is that some state institutions pressured Ahmed Abu Hashima, who is close to the armed forces, to sell his share in the Egyptian Media Co., which owns the Youm7 website and the ONTV channel, to former Minister of Investment Dalia Khurshid, who is close to Sisi.”

He continued, “I think that Sisi is trying to replace pro-military media leaders such as Abu Hashima with his close associates and loyalists such as Khurshid. He fears that the armed forces would support the alternative candidate and thus lead media organizations to support this candidate. There are several potential military candidates in the elections, namely Shafiq, former Chief of Staff of the Armed Forces Sami Annan and probably Mahmoud Hegazy.”

Sami said Sisi's opponents might root for Hegazy, as many social networking activists shared a Facebook post by his son, Moataz Mahmoud Hegazy, criticizing his father’s dismissal for “not going with the flow.” In one of his Facebook posts, Hegazy’s son ridiculed the Ashan Tebniha campaign (Arabic for "To Build It"), which calls for Sisi’s candidacy for a second term.

Muhammad Salah, the bureau chief in Cairo for Al-Hayat daily and an expert focusing on political affairs, told Al-Monitor that speculation over Hegazy's candidacy was initiated by Muslim Brotherhood websites and some inexperienced social networking site users were influenced by them.

He contends that Hegazy's dismissal as chief of staff came for military action purposes and the armed forces’ desire to rely on his replacement, Lt. Gen. Mohamed Farid Hegazy (no relation), as chief of staff, given his vast experience in leading operations in the Sinai Peninsula from 2010 to 2012 and his ability to combat terrorism in that region.

Salah’s opinion is supported by retired Maj. Gen. Jamal Mazloum, who told Al-Monitor, “I believe Sisi wanted to take advantage of the military experience of Mohamed Farid Hegazy in the fight against terrorism, while benefiting from the wisdom and military and political experience of Mahmoud Hegazy [in his new position as presidential adviser] when it comes to crisis containment and border control with Libya, especially considering that Mahmoud Hegazy was in charge of that dossier several months ago. This dossier is expected to gain more momentum.”