Egypt's 'talk show emperors' set to return to the screen

As the presidential elections approach, the emperors of talk shows are returning to the Egyptian screens, raising questions on whether or not the regime is open to criticism or using the shows to embellish its image. 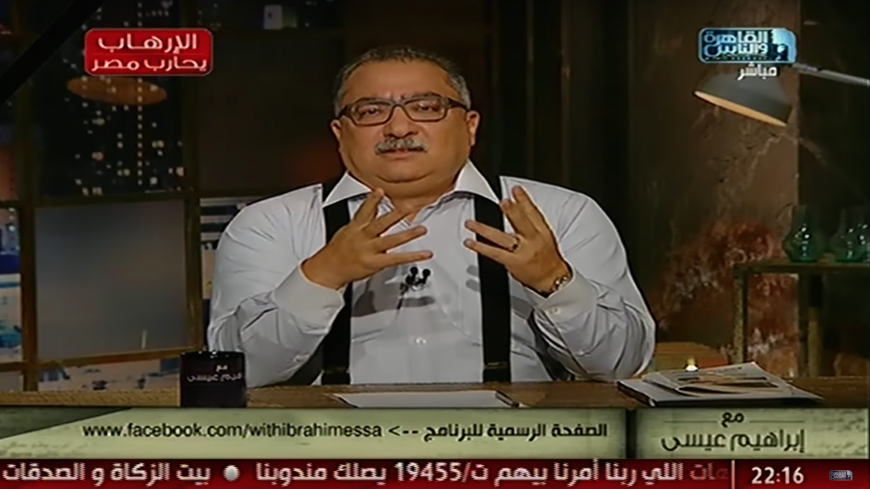 CAIRO — With presidential elections scheduled for 2018, a number of Egyptian media figures are expected to return to the television screen this month following suspensions after criticizing the ruling regime and parliament. These personalities are popularly known as the “talk show emperors,” because of their strong and widespread fan bases.

Most notable among them is journalist Ibrahim Eissa, whose last appearance on the Al Kahera Wal Nas network was in December 2016. His show was canceled after he criticized parliament and President Abdel Fattah al-Sisi for exploiting the bombing of the Church of St. Peter and St. Paul that month by raising a discussion about amending the law to extend the term of the president. Some alleged that his comments violated Article 184 of the penal code, which prohibits insulting various government institutions and authorities.

The ON TV network, owned by pro-regime businessman Ahmed Abou Hashima, announced on Oct. 26 that it had signed with Eissa to host a TV show, but claimed that the show, ads for which are now running, will not address political issues.

Meanwhile, the communications company Tawasol had said on Oct. 16 that Amr al-Laithy will return to Al-Hayat, which it owns. Laithy’s show was suspended after broadcasting a controversial street interview on Oct. 12, 2016, with a tuk-tuk (auto rickshaw) driver who said, “You watch Egypt on television and it's like Vienna; you go out on the street and it's like Somalia's cousin.”

Laithy disappeared from TV screens for a few days without justification being offered. Then on Oct. 15, Al-Hayat issued a statement saying that Laithy was taking annual leave. That is where things stood until May 1, 2017, when Laithy wrote on Facebook that his contract had ended.

Heba Shalabi, who had been the content editor of Mahmoud Saad's show, Akher Al-Nahar (Day's End), announced on Oct. 25 that Saad would be returning to the An-Nahar network. Saad, who is known to be friendly to the regime, is expected to resume broadcasting on Fridays, Saturdays and Sundays after a two-year absence.

Saad's fatal move was to show a picture being shared on social media of Sisi and Gen. Mahmoud Hegazy, then-chief of staff of the Egyptian military, meeting with activists from the January 25 Revolution. At the time, Sisi was the director of Military Intelligence and Hegazy was a member of the Military Council. Saad pondered why Sisi and Hegazy would meet with the activists if the activists were, as the regime claimed, traitors.

Saad is expected to again anchor Akher al-Nahar, which he hosted on the same network, before announcing Dec. 25, 2015, that he would not continue. He stressed that he had enjoyed broad of editorial freedom when he at the network.

Sources close to the ON TV administration told Al-Monitor on the condition of anonymity that the media figures’ resurrection became possible after the regime decided to allow them to return to television on the grounds of pluralism and because the regime is not opposed to criticism. In short, the regime would like to exploit their return prior to the presidential election to show that Sisi is OK with opposing stances.

Hassan Nafea, a professor of political science at Cairo University, is among those who believe Sisi, whose popularity has dropped, is indeed trying to embellish his image with claims that basic freedoms and an air of democracy have been restored.

“There is still doubt that the atmosphere of oppression will change, as [the regime] is, by nature, against freedoms and all means of free expression of opinions,” Nafea told Al-Monitor. “No journalists or political parties can play their roles as an opposition. No one can demonstrate. … The current change is temporary, for a certain purpose, namely regaining part of the president’s popularity before the 2018 presidential election by claiming that the regime is opening the door wide to all opinions and that it accepts criticism.”

Concerning Eissa, Nafea said the move is dubious, as Eissa is known for his daring political critique. Therefore, changing the content of his show could actually be counterproductive, as it would emphasize that the regime oppresses criticism.

A survey published in October 2016 by the Egyptian Center for Public Opinion Research (Baseera) measured the public's satisfaction after 28 months of Sisi in office. His approval rating decreased to 68%, compared to 82% two months prior. Some 24% disapproved of him, with 8% undecided. Price increases were the main reason behind the disapproval. A survey conducted by Baseera in October 2017 showed that 55% of Egyptians are unsatisfied with the state's performance.

Ameen Iskandar, a member of the Dignity Party's political bureau, led by former presidential candidate and Sisi critic Hamdeen Sabahi, said there are two factors in regard to the media figures’ return. First, it seems that the United States and European countries are pressuring the Sisi regime on its suppression of freedoms and its disputes within the regime that led to Hegazy's dismissal on Oct. 28, after clashes between the security forces and a number of extremists eight days earlier in the Western Desert that resulted in the deaths of 16 security force members.

“Criticism of the regime is quite virulent, especially on social media, which has reached the level of swearing, using vulgar language,” Iskandar told Al-Monitor. “The problems people are facing are quite significant and are increasing day by day. The emergency law and silencing of mouths could not solve any of the problems facing the country, such as terrorism.”

Identifying the second factor, Iskandar stated, “The regime knows very well that suppressed freedoms have harmed Sisi’s popularity, which poses a threat prior to the elections. Therefore, he wants to fire up the political arena in a way to show that he won a competition of sorts.”

Iskandar insisted that Eissa will not agree to be a puppet in the hands of the regime, so he will not be embellishing its image. He also agreed that Eissa's return at such a critical time is only because it would be in Sisi's interest. Eissa’s critiques, as far as the authorities will allow, will help in claiming that opposing opinions are tolerated.