Why are Egypt’s TV hosts migrating to Western screens?

Bassem Youssef, known as “Egypt’s Jon Stewart,” is no longer in Egypt, as he and other personalities like him are finding freedom of speech in the West. 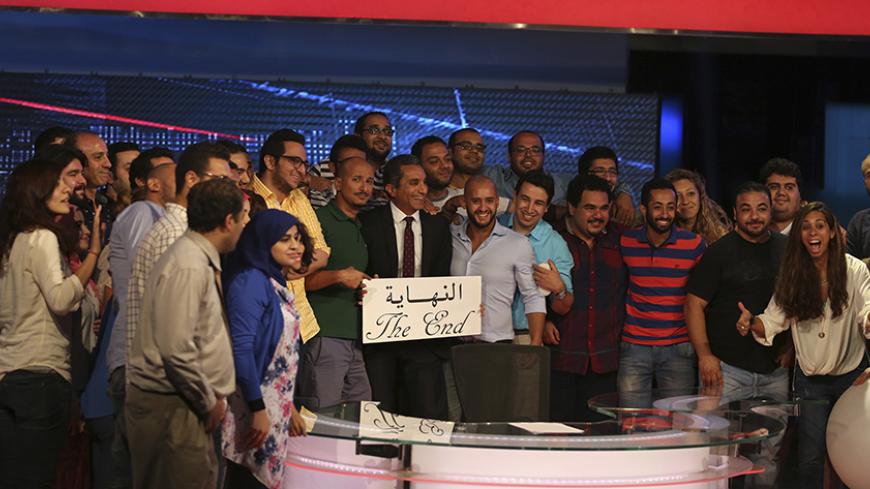 Egyptian satirist Bassem Youssef (C) poses for a photo with the crew of his show "Al-Bernameg" after announcing its cancellation in Cairo, June 2, 2014. - REUTERS/Mohamed Abd El Ghany

Media hosts have been leaving the Egyptian and Arab screens and more are likely to leave in the future. Among the first to leave was satirist Bassem Youssef, whose show, "Al-Bernameg" ("The Program"), was canceled in 2014. The show had appeared on Saudi-owned MBC MASR.

In September 2014, famed media host Yosri Fouda called it quits for his program, "Akhir Kalam" ("The Last Word"), on the ONtv network — which also suspended "Gamea Mo’anath Salem," a television show that had been hosted by Reem Maged. After ONtv was fully acquired by Egyptian businessman Ahmed Abu Hashima, it also canceled the contract of Lebanese-British presenter Lilian Daoud in June. A few hours after she announced her show had been canceled, Egyptian security forces arrested and deported her, claiming her residency permit had expired.

Many celebrities have made comebacks, such as TV anchor Youssef al-Hosseini, whose ONtv program was temporarily suspended in April after he criticized the transfer of Tiran and Sanafir islands from Egypt to Saudi Arabia. He resumed the same program in June.

TV anchor Jaber al-Qarmouty, whose ONtv contract was ended by Abu Hashima in June, signed a new contract with Al-Asema TV to host a new program with the same name as his old show, "Manchet" ("The Headline").

Presenters such as Youssef and Fouda who were unable to find a space on Egyptian screens — most likely because of their criticism of the current regime — have received offers from Western media networks. Youssef now hosts "The Democracy Handbook" on the US network Fusion. German broadcaster Deutsche Welle announced June 21 that Fouda has joined its team to host a new program called "The Fifth Estate."

The network also contracted Fouda to write a series of articles critical of the Egyptian regime and President Abdel Fattah al-Sisi, including “7 Questions for Sisi,” which he wrote July 2. In a July 19 article, titled “Revealing the Unseen in the Last Word,” he addressed what he did not publish in his last book, "The Last Word," about his experience with his ONtv program by the same name. In the article, Fouda explained why his program was canceled, indicating that the program was cut under pressure from the regime, which he accused of underestimating the value of a free media.

In an interview with Shabab Talk aired on Deutsche Welle, Fouda said he tried to retain a presence in Egyptian media but this was no longer possible. Fouda criticized some of the administration’s political positions on freedom of the press and expression, human rights and justice.

Khalid al-Balshy, a member of the Journalists’ Syndicate and former editor-in-chief of Daoud’s "The Full Picture," told Al-Monitor that Egypt’s political restrictions and limits on freedom of the press are behind the departure of Fouda, Youssef, Reem Maged and Daoud. The restrictions have reached an unprecedented level under Sisi, he said.

More programs could be canceled, but Balshy said he expects presenters who have been “excluded” to achieve success in other countries. He also believes young Egyptians who reject the current political situation will remain loyal to the figures they have followed since the January 25 Revolution in 2011, especially since they feel much of the current mainstream media doesn’t represent them.

Hussein Amin, a professor of journalism and mass communication at the American University in Cairo, expressed a somewhat different opinion. Amin told Al-Monitor that it is hard to blame the departures solely on political and media restrictions, as some presenters who have recently left the Egyptian screens started their career on Western networks. For example, Fouda and Daoud both formerly worked for the BBC.

“It is difficult as well to describe the agreement between these [Western] channels and the media hosts … as a conspiracy against the Egyptian regime, as some believe. The matter needs to be studied. Some channels are [quick to criticize] the Egyptian regime, such as Al Jazeera, while other channels have their own agendas and therefore they are encouraged to make contracts with media people who are consistent with such agendas.”

Sami al-Sharif, a former professor of mass communication at Cairo University and former head of the Egyptian Radio and Television Union, told Al-Monitor the Egyptian media has produced many stars and experts who contributed to building Arab and Western media networks. Sharif indicated that Fouda joining Deutsche Welle and Youssef joining Fusion is normal. He said their moves do not mean the regime restricts its opponents, given that there are several media hosts who oppose certain aspects of the regime (Ibrahim Issa, for example) and who are not harassed by the regime’s security forces or suspended by the channels’ management.

Sharif said the matter is complicated because some TV channels are owned by businessmen who seek to flatter the regime by excluding its opponents, without realizing the opponents have the right to disagree. Sharif pointed out that he has not observed any blatant intervention by the regime or the president against the media until recently.

He also indicated it is hard to say that world-renowned channels such as Deutsche Welle and Fusion have decided to recruit some presenters only to attack the Egyptian regime, as these channels are already able to criticize the regime and have the right to do so as long as they are not spreading certain offensive or misleading information.