Egypt steps up military operations in Sinai ahead of elections

The timing of an anti-terror military operation launched in Egypt's Sinai Peninsula has raised questions about President Abdel Fattah al-Sisi’s motives ahead of the presidential elections scheduled for March. 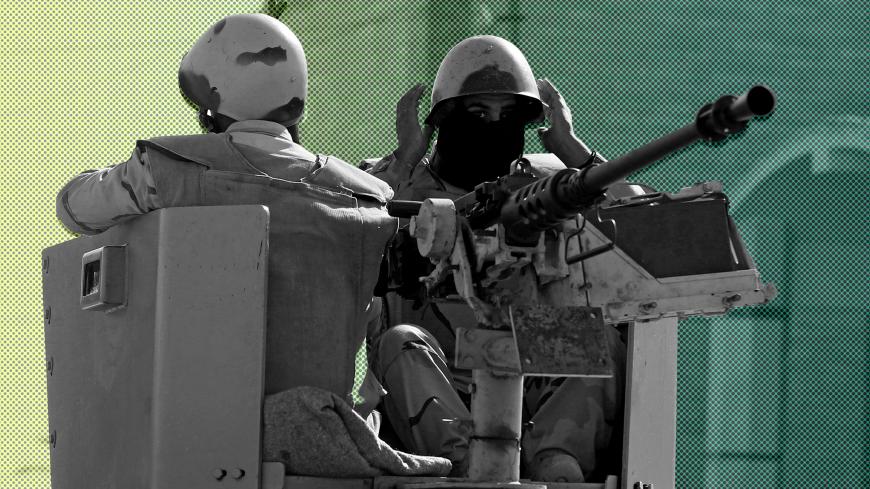 CAIRO — Col. Tamer al-Rifai, the spokesman for the Egyptian army, announced in a televised statement Feb. 9 that the Egyptian army, in cooperation with the police, launched a comprehensive anti-terrorism operation in the Sinai Peninsula under the name Operation Sinai 2018. This called into question the timing of the campaign, which comes one month ahead of the presidential elections in which Egyptian President Abdel Fattah al-Sisi will be running for a second term.

Sisi praised the operation and said on his Facebook page Feb. 9, “I proudly follow up the heroic acts of my sons in the armed forces and the police to purge the precious land of Egypt of terrorist elements who are enemies of life.”

The operation was warmly welcomed by the government, the parliament, Al-Azhar and the Egyptian Church. The Civil Democratic Movement, which includes liberal and left-wing political parties, voiced support for the army. Hamdeen Sabahy, a leader in the movement and a former presidential candidate, said in a Feb. 9 statement on his Facebook page, “We endlessly support all actions aimed at defeating the black terror that has claimed the lives of several civilians and martyrs in the armed forces and the police.”

The operation comes three weeks before the end of the three-month deadline Sisi set for army Chief of Staff Gen. Mohamed Farid Hegazy to restore security and stability in Sinai. During Prophet Muhammad's birth ceremony held Nov. 29, Sisi told Hegazy, “In cooperation with the Ministry of Interior, you shall restore security and stability in Sinai within three months using brute force.”

Bassam Radi, the spokesman for the Egyptian presidency, told the local TEN TV on Feb. 9 that the operation comes upon the instructions of the president in the wake of the attack on Al-Rawdah Mosque on Nov. 24, 2017. The attack in the Bir Al-Abed area in the northern Sinai city of el-Arish killed 309 people, including 27 children.

The Egyptian army set the stage for the military operation by taking unprecedented medical measures in three governorates — the north and south of Sinai and Ismailia. The Directorate of Health Affairs in Ismailia sent a circular putting governorate hospitals on “maximum alert.” The circular, which Al-Monitor reviewed, called on hospital workers, doctors, pharmacists, nurses, technicians, administrators and workers to cancel any vacations they had planned. It also called for the evacuation of 30% of the beds of hospitals included in the decision.

Maj. Gen. Samir Farag, the former director of the Egyptian army’s Department of Morale Affairs, linked the military operation to the presidential elections, as he told Al-Monitor that it was a “pre-emptive strike” against terrorist groups ahead of the elections.

Farag added that intelligence information revealed in October that extremist groups were planning to carry out terrorist attacks across Egypt during the presidential elections, which start in mid-March, to erode citizens’ trust in the state’s ability to secure the country and to prevent citizens from casting their votes.

According to Farag, after such information was received, Sisi gave Hegazy three months to confront those groups. He added that since Hegazy was tasked with the mission, information was gathered to plan for the operation in areas where the armed groups were concentrated in northern and central Sinai.

Three days into the operation, the Islamic State in Sinai broadcast Feb. 12 a video on Telegram under the name Houmat al-Shariah (Arabic for Protectors of al-Sharia) in which it threatened to target polling stations.

Farag explained that the operation differs from previous operations launched by the army since 2014 in that it involves air, land and naval forces as well as police forces spread across Egyptian governorates. “The forces have a specific task to accomplish, and there is no specific time frame for the mission,” he said.

Hossam Rifai, a member of the Egyptian parliament for north Sinai, told Al-Monitor that both the actions taken and the number of forces executing the operation show that it is the largest since the beginning of the war on terrorism four years ago.

“The field developments there indicate that the state is adamantly seeking to eradicate extremism, and this is what people are expecting,” he added.

With the start of the operation, classes have been indefinitely suspended in all schools of north Sinai. The roads linking north Sinai to the other governorates and the governorate cities to each other were also closed, forcing residents to stay home and rendering it difficult for university students to travel for education.

Rifai explained that the people faced several communication and movement obstacles because of the tight measures imposed in the governorate, and parliament members and tribal sheikhs are mediating with the army to ease the pressure on the people.

A journalist covering the developments in Sinai told Al-Monitor on condition of anonymity that the current military operation has received great media attention and was remarkably promoted by the army, which is issuing daily statements about its achievements.

The journalist added that the army is focusing its strikes on areas where the armed groups were active in the south of north Sinai’s three main cities, Rafah, Sheikh Zuweid and el-Arish, deep in the desert.

Chairman of the Supreme Council for Media Regulation Makram Mohammed Ahmed said in his daily column in the state-owned Al-Ahram newspaper Feb. 12 that Operation Sinai 2018 comes in response to reports whereby Israel launched airstrikes in Sinai. He added that the operation aims to prove that the Egyptian army is capable of confronting terrorists alone. Also, the operation came in response to claims whereby army leaders were divided following the arrest of former Chief of Staff Lt. Gen. Sami Annan.

On Jan. 20, Annan announced his intention to run for the elections, but two days later he was arrested following an army statement accusing him of committing violations and attempting to sow rift between the army and the people.

Hassan Nafea, a professor of political science at Cairo University, told Al-Monitor that the military operation has political goals that Sisi is seeking to achieve, and added, “Sisi spent four years in power and was commissioned by the people to fight terrorism but has thus far failed to do so. The operation is both a message from Sisi to the people that he is serious in the fight against terrorism and an attempt to save his reputation and credibility.”

Nafea believes that the military operation will play out in favor of Sisi in the presidential elections for two main reasons: The first is that it shows the people that they need to support the regime to confront the dangers threatening the country. This would divert citizens’ attention away from the elections and the exclusion of strong candidates, which only left one candidate competing with Sisi, namely El Ghad Party leader Moussa Mostafa Moussa. The second reason is that the operation shows Sisi as a loyal person worthy of a second term.

Despite the many gains Sisi would make in the event the military operation succeeds, observers remain uncertain as to whether the period of three months that was set by the president would be sufficient to eradicate terror in Sinai in the absence of an integrated counterterrorism strategy.