Two Egyptian actors who decry human rights violations in Egypt before US Congress members are vilified at home, as is an Egyptian singer. 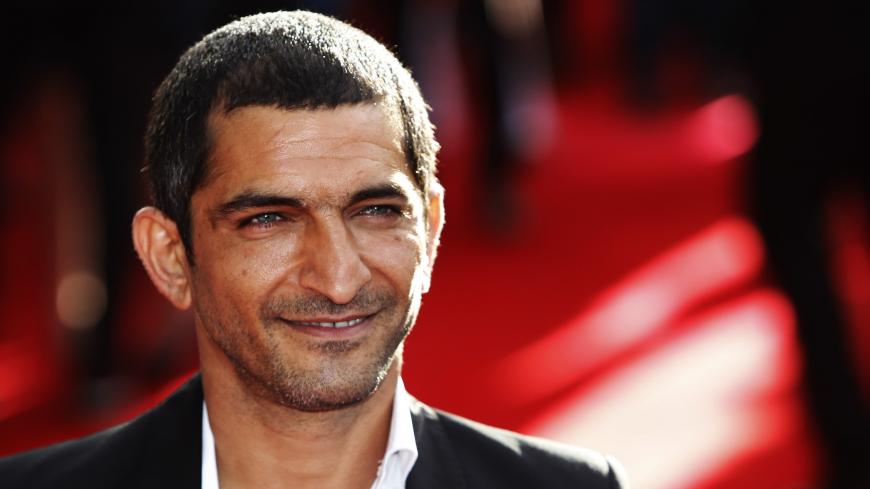 Egyptian actor Amr Waked arrives for the European premiere of "Salmon Fishing in the Yemen" at the Odeon Kensington in London, United Kingdom, April 10, 2012. - REUTERS/Luke MacGregor

Egyptian actors Amr Waked and Khaled Abu El Naga face accusations of "high treason" in Egypt after criticizing alleged human rights violations by the Egyptian government at a March 25 meeting with US members of Congress in Washington. Waked and Abu El Naga also used their meeting with the US lawmakers to lobby against proposed constitutional amendments that would allow President Abdel Fattah al-Sisi to remain in office until 2034 and would also, critics say, "enshrine military rule."

The controversial proposed amendments — which won overwhelming approval in a preliminary vote in the majority pro-government parliament in mid-February — will be put to a final vote in parliament April 14 before being voted on in a national referendum.

The two actors, who appeared on a panel with other human rights advocates in Washington that took place ahead of a congressional briefing titled "Constitutionalizing Authoritarianism," called for "international solidarity with Egyptians currently living under military rule."

Abu El Naga called the proposed constitutional amendments "shameful" and urged "every peace-loving human being" to stand with Egyptians "struggling against tyranny behind bars of fear and actual prison bars."

Waked, meanwhile, warned against giving one man ultimate power. "This is not going to go down well," he said in reference to the proposed constitutional changes.

"We are strong and they are scared of us. They [the Sisi government] want us to disappear off the face of the earth because we speak truth to power without fear," he added.

In reaction to the remarks, the Actors' Syndicate, a union of Egyptian actors, revoked the membership of the two actors and accused them of "high treason." In a statement released to the media March 27, the syndicate also accused Waked and Abu El Naga of carrying out "the agendas of those plotting against Egypt's safety and stability," in reference to the Muslim Brotherhood, designated as a terrorist group by Egypt since late 2013.

The Egyptian media, largely dominated by pro-government outlets, quickly joined the chorus of condemnation, vilifying the actors as "traitors" for their attempts "to defame Egypt." Talk show host Ahmed Moussa suggested on the privately owned Sada El Balad TV channel that the actors' visit to the United States had been funded by the Muslim Brotherhood. The independent Youm7 newspaper also claimed that the actors' comments were part of "a new Muslim Brotherhood campaign against Egypt." A talk show host on the independent CBC Extra TV channel, meanwhile, told viewers that Waked and Abu El Naga "are inciting against Egypt from the US" and "are trying to harm the country's interests." Tarek Mahmoud, a pro-government lawyer, urged the Supreme Council for Media Regulation to immediately ban all films and drama serials featuring the two "fugitives."

The actors' rebuke of the government also sparked a polarized debate on social media networks, with government supporters branding them as traitors and opposition activists praising them as heroes.

"As an Egyptian expatriate, I am proud to see these honest and successful Egyptians testifying before Congress in Washington today. They stand apart from other Egyptians living abroad who turn a blind eye to what is happening in their country. Citizenship is participation," Essam Heggy, an Egyptian space scientist who resides in Pasadena, California, wrote in a Facebook post.

"We are a strong people. We are patient but become ruthless when our patience wears thin. The injustice will end soon," a supporter tweeted in a message addressed to Waked.

Other Twitter users blasted the actors. "These traitors must be stripped of their nationality as they do not deserve Egyptian citizenship,” one tweet said. Another Twitter user wrote, "Many thanks to the patriotic artist Ashraf Zaki [head of the Actors' Syndicate] for purging the syndicate of traitors."

Waked, in turn, decried the charges leveled against him by the Actors' Syndicate.

"No artist or ordinary citizen who is concerned with the affairs of the state should ever be charged with high treason. The accusation instead, should be made against an official who has received symbolic payment for selling part of the homeland and who has allowed other countries to interfere in state policies. The constitutional oath is a sacred one; betraying it is high treason," Waked wrote in comments posted on his Twitter account.

"The jittery, hasty and irrational reaction by the Actors' Syndicate has greatly tarnished Egypt's reputation in the US, reminding Americans of the infamous McCarthy era of the 1950s," he tweeted in Arabic.

Abu El Naga and Waked are no strangers to controversy; both have previously faced a backlash over their scathing criticism of the government on social media. In November 2014, Abu El Naga was the target of a vicious defamation campaign in the media that accused him of being gay after he called on Sisi to step down "for his failure to rid Egypt of terrorism"; talk show host Tewfiq Okasha slyly questioned why Abu El Naga sleeps on his stomach rather than on his back and advised the actor to seek medical treatment for his "ailment." Taking a cue from the hostile media, lawyer Tarek Mahmoud filed a legal complaint against Abu El Naga shortly afterward, accusing the actor of "high treason" and of "trying to overthrow the regime."

Waked, meanwhile, said he became the target of a smear campaign after tweeting in July 2013 that he "would not give any person a mandate to kill others." The tweet was in response to then-Defense Minister Sisi's call to Egyptians to take to the streets to support the military's efforts "to confront terrorism." The call came in the wake of the overthrow of President Mohammed Morsi by military-backed protests, when the military launched a crackdown on the deposed Muslim Brotherhood leader's supporters. In June 2017, lawyer Samir Sabry, notorious for suing thousands of celebrities, filed a legal complaint against Waked, accusing him of "insulting the army." This came after the actor criticized parliament's endorsement of a government decision to hand over two disputed Red Sea islands to Saudi Arabia.

Earlier this month, Waked was informed by his lawyer that he had been sentenced in absentia by a military court to a total of eight years in prison in two separate cases for "spreading false news" and "insulting state institutions." The verdicts, issued in May of last year, have yet to be ratified. Waked, who is currently in Europe for work, said he was threatened with detention on his return home. The threats came after he had posted several tweets expressing his rejection to the proposed constitutional amendments. Waked also lamented that the Egyptian Embassy in Madrid had refused to renew his passport.

Waked and Abu El Naga are not the only artists being targeted for their activism. Singer Sherine Abdel Wahab had her membership revoked by the Musicians' Syndicate on March 22. She faces an investigation over controversial comments she made at a performance in Bahrain. "Here I can speak freely; for if I did in Egypt, I may be put in prison," Abdel Wahab had said jokingly at the Bahrain concert. While her remarks clearly provoked the ire of the authorities, the controversy sparked by the syndicate's decision to ban her from singing was again indicative of the polarization in Egyptian society.

The crackdown on the artists is part of a wider crackdown on dissent (in place since July 2013) that has also targeted Muslim Brotherhood supporters, liberal activists, politicians, journalists — or anyone remotely critical of the government, analysts say.

But Magdi Khalil, an author and director of the Washington-based think tank Middle East Freedom Forum, believes there is more to the Egyptian authorities' outrage over the actors' recent comments than meets the eye.

"The regime has always portrayed the ongoing conflict as being a battle between two parties: the Muslim Brotherhood and the government. Abu El Naga and Waked have shown there is a third, disaffected group — the civil, democratic, revolutionary camp. This group has now started to express its discontent and is protesting the current conditions. That's why the government is so angry," he suggested. 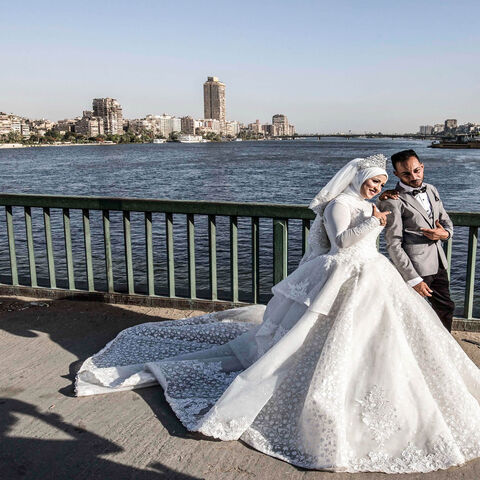 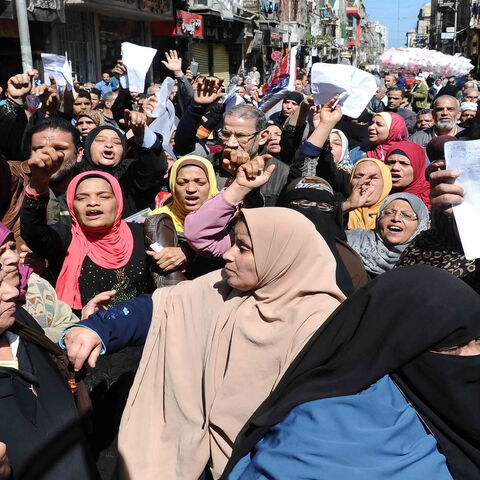