Egyptian activists criticized the integrity of a recent referendum vote that saw the passing of a constitutional amendment to extend the president's term to 2030. 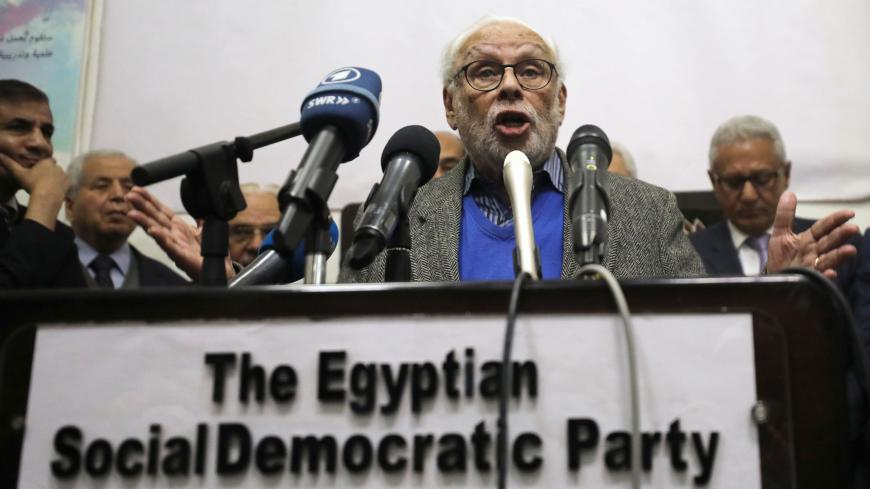 Egypt's pro-government media celebrated the results of a referendum on sweeping constitutional amendments that would allow President Abdel Fattah al-Sisi to remain in power until 2030 and entrench the military's authority. Yet opponents of the constitutional "reforms" reacted with dismay, frustration and a great deal of skepticism.

There was no doubt that voters would overwhelmingly approve the controversial constitutional changes, as the referendum lacked guarantees of being "free and fair," according to Transparency International. Yet the announcement by the National Election Authority on April 23 that nearly 90% of voters had backed the amendments dealt a heavy blow to the nearly 3 million citizens who had rejected them at the ballot box and an unknown number of others who boycotted the vote. Many activists expressed their grievances on social media, calling the referendum "null and void" and complaining that citizen participation in the vote had been "coerced."

"The results are not surprising — even if the vote was monitored by the most assiduously careful set of national and international observers, the environment in which these amendments were voted on was hardly conducive to an informed choice," tweeted H.A. Hellyer, a senior fellow at the Atlantic Council.

Not only was the vote rushed — coming just three days after parliament approved the revisions — but the government also went to great lengths to suppress dissent ahead of the vote. Two artists who had spoken out about their rejection of the constitutional changes were branded as "traitors" by the pro-government media and expelled from the actors' union, the very state body entrusted with protecting actors' rights.

Ahmed Badawi, an engineer and member of the liberal Dostour Party, was arrested April 22 — the third and final day of the vote — after raising a sign saying "No to the constitutional changes" outside a polling station in an affluent district of Cairo. His arrest was the latest in a string of arrests linked to opposition to the amendments. In February, four members of the Dostour Party were arrested and "forcibly disappeared" after voicing their objection to the constitutional changes, according to Mada Masr. On March 1, Ahmed Mohy, another activist who had raised a sign in Tahrir Square calling for Sisi to "step down," was shown in an online video being dragged away by police. His whereabouts remain unknown.

"The whole process has been deeply politicized and too many suspicions around the transparency of the process exist for us all to expect the results will be accepted at face value. Whether they are true or not is almost besides the point — trust in the system is what is in doubt," Hellyer tweeted.

An internet activist who uses the pseudonym The Big Pharoah on Twitter questioned the "high turnout" cited by Judge Lasheen Ibrahim, the head of Egypt's election authority. "Voter turnout in the 2011 constitutional referendum was 41%, they claim this one is 44%. Last Sunday I voted in less than 1 minute. In 2011, I stood in line for an hour and a half to vote!" he tweeted, the latter in reference to voter enthusiasm during the March 2011 constitutional referendum — Egypt's first free and fair vote held just weeks after President Hosni Mubarak was forced to step down

Ahead of the recent vote, banners filled the streets of Cairo, urging Egyptians to "do the right thing." Patriotic songs played on the radio and TV stations in a bid to stir up nationalistic fervor. During the three days of voting, the same music could be heard blaring from loudspeakers outside polling stations, where voters were bussed in by the dozens to cast their ballots. At several polling booths, food parcels or grocery vouchers were distributed to citizens who showed their ink-stained fingers as proof they had voted. The food parcels bore the logo of the pro-government Future of the Nation Party, whose members claimed the offerings were "charity for the upcoming month of Ramadan." The vouchers, meanwhile, could later be exchanged for staples like cooking oil, rice, pasta and sugar at nearby grocery stores. Media reports of "the bribes" embarrassed the government, prompting hasty denials from election officials and accusations by the pro-Sisi media that the outlawed Muslim Brotherhood had "tried to tarnish the vote" by providing the food packages. Rights advocates criticized the vote-buying as a "humiliating exploitation" of the needy during a time of economic hardship.

"How much did the government waste on a fraudulent referendum in which Egyptians were coerced into participating and the poor were humiliatingly exploited in a farce meant to confirm the insurmountable power of their dictator?" tweeted Timothy Kaldas, an analyst at the Tahrir Institute for Middle East Policy. "Every piaster spent was stolen from Egypt's impoverished masses."

But Egypt's pro-government media turned a blind eye to the violation, instead hailing the referendum as a "victory in the epic battle of the people" and "a new dawn in the country's history." Sisi's supporters also overlooked the vote-buying and rejoiced upon hearing the referendum results. Member of parliament Mohamed Abu Hamed, a staunch Sisi supporter, congratulated "Egypt and its people" in a tweet, saying, "It's a new step in building the nation and the future."

"Greetings to the great people of Egypt, who will always be an inspiration to the peoples of the world and the guardians of their homeland," he added.

Sisi also paid tribute to voters in a tweet, saying they "dazzled the world with their national awareness of the challenges facing our dear Egypt."

"This referendum will be recorded with pride in the history of our great nation," he added.

In contrast, a feeling of foreboding was palpable among opposition activists, who believe the amendments could spell "the beginning of the end" for the current regime. "Unfortunately, the Egyptian regime is not learning the lessons of the 2011 revolution or experiences in Algeria and Sudan," Khaled Dawood, former head of the Dostour Party, told the Associated Press April 18. Other opposition activists like Hassan Nafaa, a professor of political science at Cairo University, warned of even more repression to come. "There will dangerous repercussions from the ruling regime as we will see more repression and restrictive policies," he said.