While the Egyptian president's comments on human rights and political prisoners angered Western observers, his comments on coordination with Israel pose a greater domestic threat. 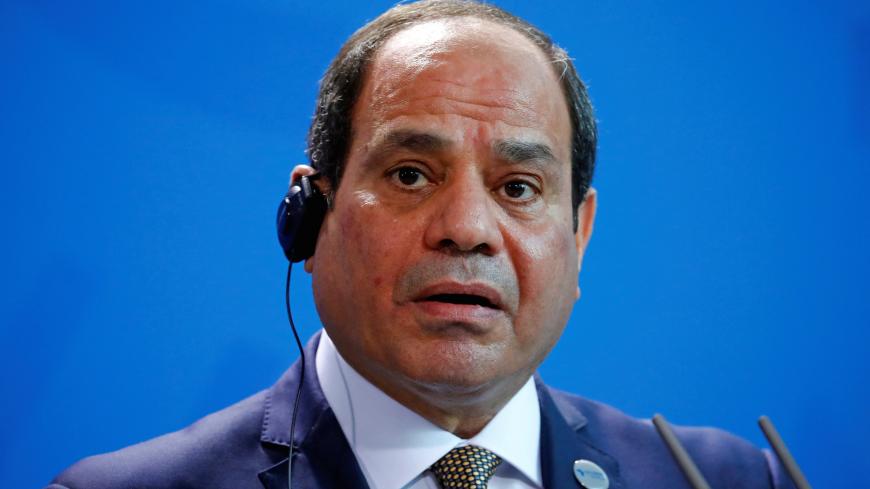 On Jan. 6, the US television network CBS aired an interview with President Abdel Fattah al-Sisi despite Egypt's attempts to prevent the interview from being broadcast. The "60 Minutes" interview drew mixed reactions in Egypt, both angering Sisi's supporters and earning praise from opposition activists on social media. Egypt's secular activists, however, were displeased that the show only gave voice to Muslim Brotherhood figures, implying that Egypt's opposition consisted solely of members of the country's outlawed Islamist group.

"The 60 Minutes interview narrowly framed the problem in Egypt as a battle between el-Sisi & [the Muslim Brotherhood] & having the opposition only represented by them," tweeted Nancy Okail, executive director of the Washington-based Tahrir Institute for Middle East Policy.

A liberal activist who took part in Egypt's Arab Spring protests, Okail has paid a high price for her work promoting the rule of law and democracy in her country. She was among 43 defendants in the longstanding NGO foreign funding case of 2011 (reopened by the Sisi government in May 2016), accused by the government of "operating a civil society organization without a license" and "receiving illegal foreign funds," charges she has repeatedly denied. Okail fled the country in 2011, leaving behind her toddler-age twins to seek exile in the United States. While her ordeal has ended recently (the trial against civil society workers came to a close last December with the acquittal of all but three of the defendants), Okail says her work is far from over as she continues to push for democratic reforms in Egypt.

Wael Eskandar, another liberal activist, dismissed the CBS interview as offering "nothing new," but acknowledged that it gave Sisi "the closest he's ever got to an interrogation about political prisoners and the Rabaa massacre."

President Sisi's supporters were as dismayed by CBS' refusal to heed Egypt's call to pull the interview as they were with the interview's actual content. Supporters lashed out at CBS on Twitter and Facebook, accusing the network of bias and of serving as a mouthpiece for the Muslim Brotherhood.

Opposition activists, meanwhile, praised the interview for "embarrassing" the Egyptian strongman, gloating that their oppressor's "blatant lies" had been exposed. They shared pictures of a nervous-looking Sisi as the show host Scott Pelley confronted him with allegations of rights abuses committed during his presidency.

Osama Gaweesh, an exiled Egyptian TV presenter who has been sentenced to five years in prison for his criticism of the Sisi regime, called on viewers watching the interview to "document and protest Sisi's lies about political prisoners and prisoners of opinion in Egypt using the hashtags #LyingSisi and #Sisi60Mins."

Sisi's allegation also failed to convince Egypt's cynical opposition. "Sisi affirmed on the show that there is not a single political detainee in Egyptian prisons and that there are only terrorists facing prosecution for their crimes," said Hassan Nafaa, an economics professor at Cairo University and an outspoken critic of the Sisi regime. "Does he really expect the West to believe him? And what about the Egyptian public that knows full well that Anan, Maasoum Marzouk and hundreds of other detainees have nothing to do with terrorism?" Nafaa was referencing the military's former chief of staff, Sami Hafez Anan, who was detained in January 2018 after announcing plans to run in the presidential election, and also Maasoum Marzouk, a former ambassador held since August 2018 for calling for a referendum on whether Sisi should continue in office.

"60 Minutes" also asked Sisi about the August 2013 killings of hundreds of opposition protesters in a single day at an east Cairo encampment, now known as the Rabaa massacre. While the president denied he had given security forces orders to fire on the protesters, he justified the killings, saying, "There were thousands of armed people in the sit-in for more than 40 days. We tried every peaceful means to disperse them." Pelley refuted the claim that the protesters were armed, reminding viewers that Egyptian government sources had reported at the time that "just over a dozen weapons were found at the east Cairo encampment."

But perhaps the most contentious part of the interview, and the reason the Egyptian government did not want it seen by the Egyptian public, were Sisi's responses to questions on Egypt's close military cooperation with Israel. Sisi affirmed that his country has "a wide range of cooperation with the Israelis" — a potentially damaging acknowledgement that could undermine his popularity at home. The nature of that cooperation has been kept hidden from the Egyptian public, which has long been conditioned to believe that Israel (a country with which Egypt fought four wars) is their country's arch-enemy. Journalists have limited access to Northern Sinai, where the military is at war with Islamic State-affiliated militants and the Egyptian media can only publish the official narrative when reporting on terrorism-related cases. Under the country's 2015 counterterrorism law, quoting independent sources and publishing news on militant attacks that contradicts the official version of events is a crime punishable by prison sentences. Not surprisingly, there has been no mention in the Egyptian press of alleged Israeli airstrikes on Islamic State-affiliated terrorists in the Sinai Peninsula, which the New York Times claimed were carried out early last year with the blessing of the Egyptian president.

It is little wonder then that the presidency’s media office has given "explicit instructions to Egyptian media organizations to refrain from covering the CBS interview," according to the Egyptian independent news site Mada Masr, which is among more than 500 news sites blocked in Egypt since March 2018.

While the Egyptian press has acquiesced to the gag order, some of the pro-government media gleefully reported on what they claimed was "the resignation of David Rhodes from his position as head of the news sector at CBS." Egyptian daily al-Watan went further, falsely claiming that Rhodes had been "dismissed" in relation to the Sisi interview. The truth is that Rhodes is stepping down of his own accord at the end of February, when his current contract ends, and will remain at the channel as a senior adviser to acting CBS CEO Joe Iannielloo.

With the CBS interview gag order — the latest of multiple gag orders in Egypt in recent years — and hundreds of news sites blocked, the one thing that is crystal clear is that the Egyptian people are being kept in the dark and being fed lies by the country's propagandist media.

"The situation is pathetic," publisher and analyst Hisham Kassem told Al-Monitor. "The worst outcome of the CBS interview with President Sisi is the performance of the ignorant media outlets that are stumbling over themselves to offer their allegiance to the state and are attacking the US news network with absurd and baseless arguments."