A group of Muslim Brotherhood detainees have signed a letter from inside prison, asking the authorities to pardon them as they are ready to quit political work after feeling abandoned by the group’s leadership. 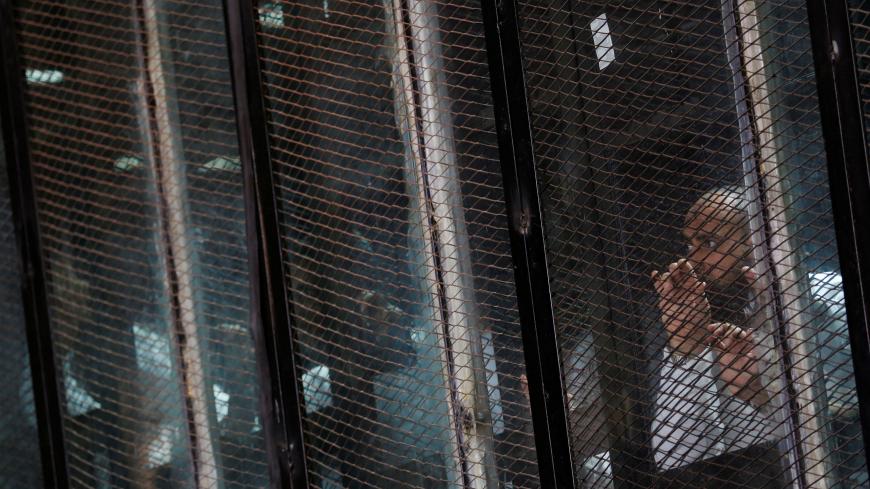 A defendant who is a member of the Muslim Brotherhood is seen during the trial of Brotherhood members at an Egyptian court on the outskirts of Cairo, May 31, 2016. - REUTERS/Amr Abdallah Dalsh

CAIRO — From within the confines of Egyptian jails, a group of young Muslim Brotherhood members arrested for political and criminal reasons launched an initiative Aug. 11 to resolve their stalemate with the Egyptian authorities. They issued written statements headlined “A letter from arrested young people to Muslim Brotherhood leaders.”

In their letter, they called on the current Brotherhood leaders to cede their place to those who are more competent in leading the group’s affairs, to find a quick solution to the prisoners' case, take decisive action for mediating with the Egyptian political leadership to get Brotherhood detainees released.

The letter comes as a former detainee close to the Brotherhood, Omar Hassan, posted Aug. 19 on his Facebook account a suggestion that each pardon seeker pay a sum of money as “bail or ransom or donation to the Tahya Misr Fund” in foreign currency to support the recovery of the Egyptian economy. Hassan, who specified that the Muslim Brotherhood is not linked to his proposal, suggested that each detainee pay $5,000. Tahya Misr, or Long Live Egypt, is a fund that helps pay for social development programs.

The letter was handwritten by a young detainee and signed by 350 detainees in one of Egypt’s prisons, and was approved by 1,350 others in jails across the country. One of the detainees' parents reportedly acquired a copy of the letter during a visit, and it was later leaked to the media through media figures and rights’ activists.

Since the ouster of President Mohammed Morsi in 2013, Egypt has been leading a crackdown against the Muslim Brotherhood, with successive security blows targeting the group’s leadership to the arrest of many of its members. Others were tried in court, and some Brotherhood members were killed. Morsi died in court at age 67 in June.

Meanwhile, divisions ripped through the Brotherhood ranks between the leaders and members in the absence of any signs of negotiations between the group’s leaders and the government to release those detained.

However, several Muslim Brotherhood leaders doubted the letter’s authenticity since it was sent by incarcerated members from inside jail. Ibrahim Munir, the secretary-general of the Muslim Brotherhood in London, told Al Jazeera over the phone Aug. 19 that it is a “fabricated security letter” aimed “to improve the image of the Egyptian authorities before the set date for holding the anti-torture conference.”

The UN High Commissioner for Human Rights was to hold a regional conference to define and criminalize torture in Cairo on Sept. 24, but the conference was postponed after a wave of criticism from nongovernmental organizations, including rights groups.

Munir said, “Based on our experience for the past 60 years, Egyptian security plays such games, and it would be strange to believe it asked the culprit to be the key to the solution.”

Munir said, “These oppressors, the Egyptian ruling body, and this man, Abdel Fattah al-Sisi, are selling us this narrative before the anti-torture conference is held in Egypt. I believe security institutions fabricated this letter and forced some people to write it.”

He further said the Muslim Brotherhood was not who put these people in jail nor did it force them to join its ranks, and whoever wants to renounce the group can go ahead.

The conference on torture slated for Egypt was canceled Aug. 20.

UN High Commissioner for Human Rights spokesperson Rupert Colville said in an email message, “We were well aware of the growing unease in some parts of the NGO community with the choice of location.… As a result, we decided to postpone the conference and reopen the process of consultation with all relevant actors.”

Egypt has repeatedly rejected constant reports of rights organizations about torture and says they lack credibility and are politically motivated. Egypt claims that any human rights violations are individual incidents whose perpetrators are punished.

A 2017 Human Rights Watch report said Egypt did not abide by the basic rules of international human rights law amid wide-scale arbitrary detention, forced disappearances and torture of opposition members, which the organization said had become rampant in 2013.

Muslim Brotherhood spokesperson Talaat Fahmi said in an Aug. 20 TV interview on Al Jazeera in response to the detainees’ letter, “The Muslim Brotherhood tried to contact the Egyptian authorities to release the detainees, but they shut their doors.” He added that a misstep would lead to disbanding the Brotherhood, which is not acceptable.

The families of some detainees supported the letter of the young Brotherhood members. Ibrahim al-Zaafarani, a former Brotherhood leader and father of a detainee in Egyptian prisons, sent a message to the group’s leaders, calling on them to reveal any effort they made in this regard.

Zaafarani told Al-Monitor that Brotherhood members in prison consider themselves partners, not mercenaries, in this group. They and their families have the right to know if there are real and constant endeavors to end their suffering, he said, adding that they want to be the first people to receive the news, be it bad or good. After all, the leadership has media platforms to communicate with everyone, Zaafarani added.

Nevertheless, Zaafarani said the leadership is choosing silence, as though such endeavors, if they exist, are family secrets. He said prisoners and their families feel the Muslim Brotherhood leadership has washed its hands of them.

Muslim Brotherhood lawyer and former detainee Abdul Menhem Abdul Maqsoud said that he cannot be sure about contact between those inside jail and those on the outside due to miserable detention circumstances.

He told Al-Monitor, “Authorities in Egypt do not want reconciliation with any Brotherhood leaders.” He said the presidential pardons issued in mid-May, which included several members, were not the result of a larger initiative but rather were based on pardon requests from the families of the released individuals.