After the Egyptian government encouraged World Youth Forum participants to engage with one another ahead of the conference using the hashtag #WeNeedToTalk, many citizens took the opportunity to call out alleged human rights abuses. 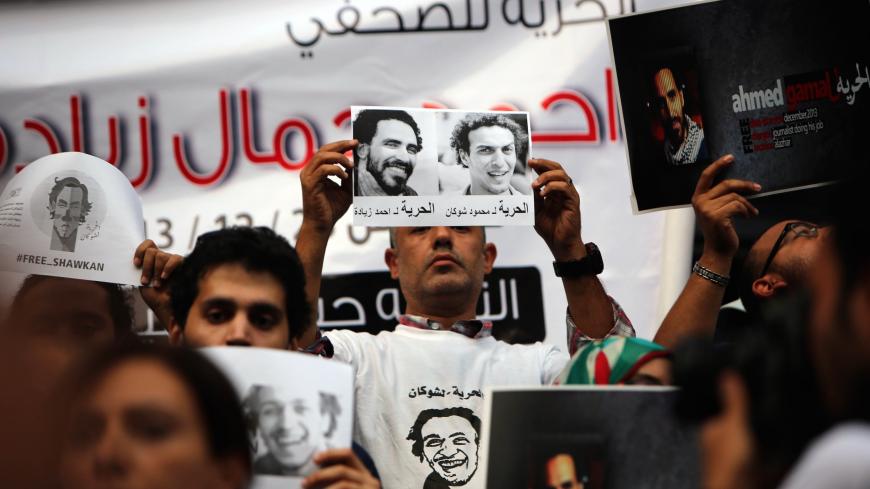 Egyptian journalists take part in a protest in front of their syndicate in Cairo on Sept. 30, 2014, to demand the release of their detained colleagues Ahmed Gamal Ziada (whose face is on the left of the poster being held in the center) and Mahmoud Abu Zeid, also known as Shawkan (whose face is on the right). - GETTY/Mohamed El-Shahed

A campaign launched by the Egyptian government to promote the World Youth Forum scheduled for Nov. 4-10 at the Red Sea resort of Sharm el-Sheikh appears to have backfired after internet activists hijacked the conference hashtag #WeNeedToTalk to highlight human rights abuses in the country under President Abdel Fattah al-Sisi’s regime.

The conference’s organizers had hoped the hashtag would encourage interaction among the participants ahead of the forum and promote Egypt as a safe tourist destination. Instead, the activists posted images of security forces assaulting and arresting youths at protest sites and shared portraits of jailed journalists, activists and others who have allegedly been tortured or forcibly disappeared.

“#WeNeedToTalk about forced disappearances,” Amr Bakly, the director of the Cairo Liberal Forum, an Egyptian nongovernmental organization working to spread liberal values and culture among Egyptian youths, posted on Twitter.

“#WeNeedToTalk about the president who spends more on arms than on education and health care,” he wrote in another tweet.

Prominent activist Mona Seif, whose brother Alaa is serving a five-year sentence for violating a law banning unauthorized protests, used the hashtag to draw attention to the plight of Amr Nohan, a student jailed for three years for posting a photoshopped image of Sisi wearing Mickey Mouse ears on Facebook.

Bahey El Deen Hassan, a human rights defender and director of the Cairo Institute for Human Rights Studies, meanwhile posted a picture of jailed researcher Ismail Alexandrani with the caption “#WeNeedToTalk. Ismail talked! He is in prison because he questioned why some senior military officers had become jihadis.”

Hours after it was launched, the hashtag became the top trending topic on Twitter in Egypt, unleashing a tidal wave of anti-government criticism that observers said had been “provoked by the sheer hypocrisy of the government campaign.”

“On the one hand, the government is using social media to ‘encourage’ young people to discuss their ideas. On the other hand, the authorities are muzzling the media and blocking hundreds of independent news sites. They are also silencing critics by imprisoning, torturing and exiling them. Only one narrative is allowed in today’s Egypt: the state narrative,” she lamented.

The Egyptian government is increasingly using social media to promote its causes and further its interests, but the online state propaganda is often met with skepticism and rebuke from the tech-savvy revolutionary activists who had used social media to organize and mobilize for the 2011 street protests against longtime autocrat Hosni Mubarak. “The internet is a double-edged weapon; the government needs to realize that the shrinking space for free expression in Egypt has left youth with no option but to turn to social media networks such as Facebook and Twitter as the ‘alternative’ platform for them to express their grievances and concerns,” El Ibiary told Al-Monitor.

This is not the first time that an Egyptian government promotional campaign has gone off track. Last year, a publicity stunt by the government to revive the tourism industry backfired after internet activists used the campaign hashtag #ThisIsEgypt to tweet some harsh truths about the country. While some activists had used the hashtag as intended, sharing pictures of monuments and tourist attractions, others showed pictures of garbage-littered streets and posted links to articles about tortured detainees, jailed journalists and ongoing police excesses.

Under Sisi, Egypt has seen what rights activists describe as “an unprecedented crackdown on dissent” that initially targeted Muslim Brotherhood leaders and supporters but later expanded to include an ever-widening range of liberal activists, members of civil society organizations, intellectuals and journalists critical of government policies. Since the July 2013 overthrow of former Islamist President Mohammed Morsi, tens of thousands have been imprisoned, according to rights groups who claim that as many as 60,000 political prisoners languish behind bars in Egypt today. The local and international rights groups have also documented hundreds of cases of forced disappearances and dozens of torture cases in the country’s notorious prisons, prompting Human Rights Watch to describe it as a “torture epidemic.”

Sisi has denied the accusations of torture leveled at the police by human rights groups, insisting, “We do not practice torture.” He has called on the international community to “be wary of the information published by rights organizations.” At a recent press conference in Paris held after his talks with French President Emmanuel Macron, Sisi responded to a question on the country’s poor human rights record by saying that Egypt was “in a different region” and “the government had other pressing issues to address.” He urged reporters not to assess the human rights situation in Egypt, a developing country, by the same standards used to judge human rights in the more advanced countries. “When it comes to human rights, I hope that we understand it in its true context of a country in Egypt’s situation. We are not in Europe, with its intellectual, cultural … and human advancement,” he said.

In recent weeks, a new wave of arrests has targeted members of Egypt’s LGBT community. Dozens suspected of being gay were rounded up and detained despite the fact that, to date, Egypt has no anti-homosexuality laws. Most of those arrested were detained on charges of “debauchery” and “spreading immorality in the society.” A bill criminalizing acts of homosexuality is currently under review by parliament after a parliament member proposed a draft law to that effect in mid-October. If passed, those who are gay as well as those who “incite homosexuality” would face prison sentences of between one and three years.

Besides the social media hashtag, the government’s promotional campaign for the upcoming World Youth Forum also includes a video and TV spots portraying the conference as an olive branch. “By hosting the conference, Egypt is sending a message of peace to the world,” the narrator tells viewers. Giant billboards on Cairo’s busy streets advertising the forum depict smiling faces of youths from different countries and are meant to show Egypt’s commitment to promoting multiculturalism and tolerance. It is a far cry from the reality in the country where the pro-government media has persistently fueled xenophobic sentiment and suspicion of foreigners among the public in recent years.

Hagar Gamil, a young broadcaster and a participant in the state-run youth leadership program that proposed holding an intercultural dialogue, said she was excited about meeting the participants from more than 80 countries. “It will be a great opportunity to discuss the common challenges we all face and exchange viewpoints on issues affecting young people all over the world such as extremism and unemployment,” she told Al-Monitor. She also looks forward to sharing her experiences as a young leader in the national youth leadership program and talking about the role of the state in preparing future leaders.

While many analysts agree that Egypt’s national youth leadership program is a commendable initiative as it helps young people develop leadership skills and encourages them to become more engaged in their communities, skeptics argue that the opportunity is only available to a select group of young Sisi supporters.

“Where are the young pro-reform activists who mobilized the public for the street protests and called for the downfall of the regime six years ago? Many of them are either in jail or living in exile. They are the ones who are capable of effecting real change. Without their participation, the youth conference will be just another talking shop,” said Hossam Meneai, a young Egyptian filmmaker and activist who in February 2014 spent a short time in Sisi’s prisons on charges of “spreading false news” and “threatening the stability of the state.”

Meneai has since left the country and now resides in Poland. Like many of Egypt’s young revolutionaries, he won’t be attending the youth conference.