Egypt's LGBT activists, who once had high hopes that the January 25 Revolution would bring about a greater openness for gays in Egypt, have been sorely disappointed by the actions against them under the Sisi administration. 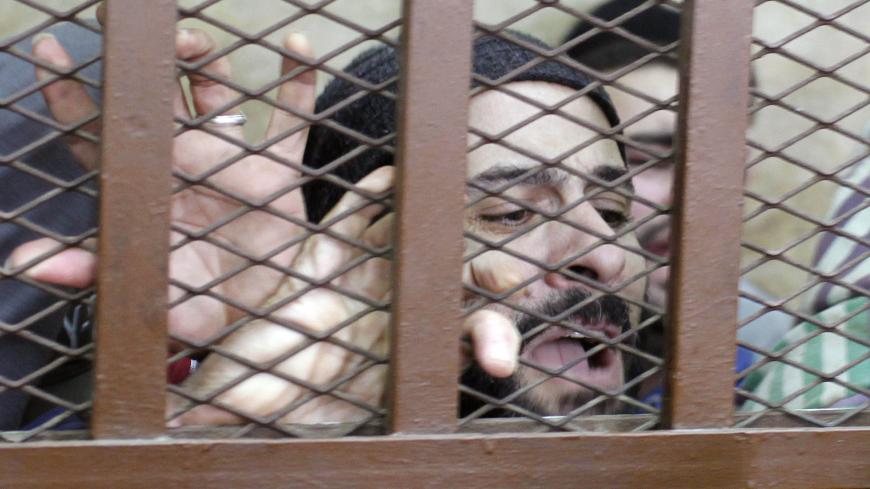 On June 15, three days after the attack on an Orlando gay nightclub by a gunman that killed 49 people and left 53 injured, Yousuf Rezk, 18, posted a picture on Facebook of a man raising a rainbow flag (a symbol of LGBT pride) with the Pyramids of Giza as a backdrop. Not surprisingly, the face of the man in the picture was hidden to protect his identity. The caption below the photograph read, “In solidarity with the LGBT community around the world, which still has to fight against hatred and discrimination."

As a young member of Egypt’s LGBT community, Rezk has experienced prejudice and stigma firsthand. He is one of a handful of Egyptian gays who have courageously come out to their families about their sexual orientation. And Rezk has gone even further. On his Facebook page, he defiantly describes himself as "an LGBT activist." Going public with his sexuality is an act of bravery in Egypt, a deeply conservative society where nearly 200 people have been arrested since late 2013 on the charge of “debauchery.” A 2013 survey conducted by the Pew Research Center found that 95% of Egyptians believed that homosexuality should not be accepted by society.

Rezk’s decision to reveal his sexuality has, however, come with a high price. A year ago, his parents threw him out of the house, after failing to persuade him to change his orientation. He has since had to fend for himself, taking on odd jobs to pay his school fees.

“My family still has hope that this is just a passing phase and that one day, I’ll be miraculously cured,” he told Al-Monitor.

His family's non-acceptance of his sexuality has not been the only challenge. Rezk has also been confronted in his church by the strong belief that “homosexuality is a disease that can be cured by some sort of reorientation therapy.” As a result, he has embraced atheism as an alternative to his original Coptic Orthodox faith. Since leaving home and abandoning the church, Rezk has felt “relieved” and “liberated” and can now wear his hair in long braids down to his waist “the way I’ve always wanted to,” he said. His non-traditional appearance gets him a lot of unwarranted attention on the streets of Cairo where he has had to put up with a lot of sexual harassment and catcalls.

“I’m often groped and verbally attacked when I use public transport, including by the police, the very people who should be protecting me,” he lamented.

In the latest in a series of similar incidents, Rezk was thrown off the subway train by a crowd of commuters who sneered at his effeminate appearance and gestures.

“Man up!” they shouted scornfully, pushing him off the carriage as the train was moving out of the station. Luckily, he managed to escape with only minor injuries.

Rezk’s suffering is shared by other members of Egypt’s LGBT community who live in constant fear as targets of a brutal crackdown on them since the military takeover of the country in July 2013. While homosexuality is not a criminal offense in Egypt, scores of people have been handed down "shockingly long" prison sentences on charges of “incitement to, facilitation of or habitual debauchery,” according to the Egyptian Initiative for Personal Rights (EIPR).

On April 24, 11 men were sentenced to jail terms ranging between three and 12 years for the “crime” of habitual debauchery and “abuse of a communications medium” (i.e., the internet). They were arrested in a flat in the Cairo suburb of Agouza in September 2015 and were allegedly part of a network that offered sexual services for money, acquiring clients through social media, according to the semi-official Al-Ahram newspaper. In a statement published on its official website, the EIPR criticized the verdicts as “a continuation of the orchestrated vice police campaign against gay and transgender people.” In November 2014, a Cairo misdemeanor court sentenced eight men to three years in prison on the charge of “violating public decency” after they appeared in a YouTube video showing what seemed to be “a gay wedding ceremony.”

The recent prosecutions of members of the LGBT community have prompted gay dating sites such as Grindr to issue warnings to their Egyptian users that “police may be posing as LGBT on social media to entrap you.”

Indeed, this method of hunting down gays and others from the LGBT community has been used by the police in Egypt since the days of ousted authoritarian President Hosni Mubarak. Police raids on gay hangouts and private gay parties during the administration of President Abdel Fattah al-Sisi are reminiscent of the much-publicized 2001 “Queen Boat case” when 52 men were rounded up in a raid on a floating disco on the River Nile and were charged with “performing immoral acts, the use of perverted sexual activities and contempt of religion.” The men were reportedly subjected to beatings and other abuse including invasive examinations to determine whether they had engaged in anal intercourse.

Sadly, little has changed for Egypt’s LGBT community since the days of Mubarak, despite the high hopes of the activists who had called for “Freedom and Social Justice” during the 2011 uprising that forced the autocratic ruler to step down. Ali (known to his friends as Mariam), 25, dreams of undergoing a sex-change operation because “I believe that deep inside I’m a woman.” He told Al-Monitor, “The situation for us is worse today as there is a lot more fear.” Constantly harassed on the streets and unable to find a job, “she” has been left with no option but to sell sex for a living. Mariam has also been arrested several times and alleges she was raped with a bottle while in jail “to punish me for my perversion."

Ironically, Egypt’s Ministry of Foreign Affairs has released a statement condemning last week’s attack on the Orlando gay club. Offering condolences, the statement published on the Foreign Ministry’s Facebook page reiterated calls “to fight terrorism, which knows no boundaries or religion.” It also called for "international solidarity to counter the scourge worldwide." Al-Azhar, Sunni Islam’s highest authority, also denounced the attack as a “heinous crime” that violates all tolerant teachings of Islam.

To Rezk and Mariam, the words ring hollow.

“This is hypocrisy at its best. Where is the outcry when we suffer persecution and abuses on a daily basis?” Rezk said.

“I don’t know whether to laugh or cry,” Mariam said, adding in a sarcastic tone, “Would someone please tell the authorities that charity begins at home.”

They both look forward to a day when they can leave Egypt to settle any place where they can be themselves and be accepted for who they really are.