Al-Azhar has in recent days stepped up its anti-LGBTQ rhetoric, following anti-gay comments by a prominent retired soccer star. 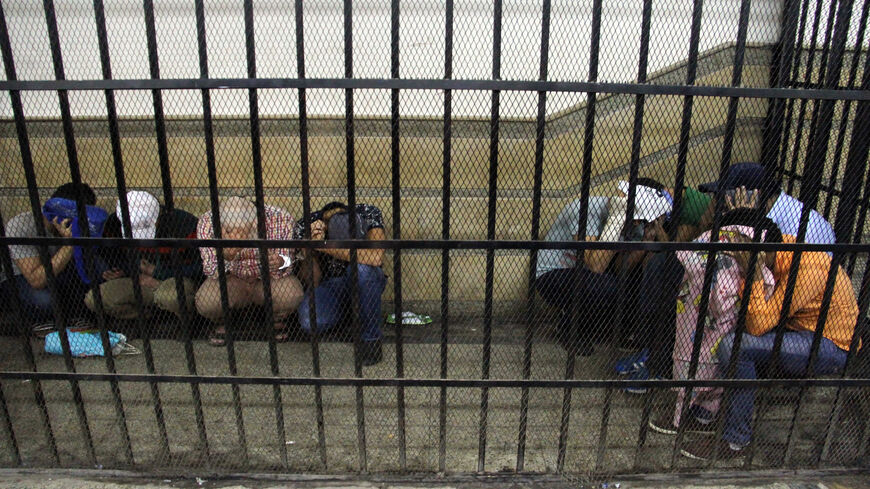 Eight Egyptian men on trial for doing a video prosecutors claimed was of a gay wedding hide their identities as they sit in the defendant's cage during their trial, Cairo, Egypt, Nov. 1, 2014. - -/AFP via Getty Images

It also described homosexuality as "moral decadence," noting that it "goes against the teachings of religions."

A day earlier, on Dec. 4, Al-Azhar slammed same-sex marriages calling them "a major sin." Citing Quranic verses, the religious authority reminded that God destroyed an entire community that had engaged in homosexuality.

This came in a statement published on Al-Azhar's International Center for Electronic Fatwas' official Facebook page.

Al-Azhar reaffirmed its categorical rejection of homosexuality, denouncing what it called "a systematic campaign" by international forces and organizations that "use their media outlets, entertainment shows and online platforms as well as celebrities to promote this obscene phenomenon and spread it among those willing to practice this deviation in various societies including in Arab and Muslim societies."

The statement further warned that "such evil plots aim to destroy the moral and social values of the family, distorting the identity of its members and threatening to undermine the security and stability of societies." It also argued that "marriage can only exist between a man and a woman."

The statement concluded by calling for respect of other cultures and societies; it also called on Arab and Muslim societies to adhere to their values and the teachings of Islam.

Al-Azhar's denunciation of homosexuality came in reaction to a controversy sparked by sports commentator and former Egyptian star soccer player Mohamed Abu Trika's criticism of the British Premier League's "Rainbow Laces" campaign, an initiative in which players from the 20 Premier League clubs wore rainbow armbands during matches played between Nov. 27 and Dec. 2, to express their support for the LGBTQ community in soccer and beyond.

In controversial comments broadcast Nov. 30 in Arabic on the Qatar-owned beIN Sports channel, Abu Trika slammed the campaign championing LGBTQ rights, arguing that homosexuality "is not compatible with Islam."

"Our role [as Muslims] is to stand up to this phenomenon [homosexuality]," he said.

Calling homosexuality a "dangerous ideology," Abu Trika noted, "It is becoming nasty and people are no longer ashamed of it."

Trika further argued that homosexuality "is against human nature." He urged beIN Sports to refrain from broadcasting anything LGBTQ-related during their live transmission of the Premier League matches and called for Muslim players to boycott the campaign.

The 43-year-old former Al-Ahly midfielder, who retired in December 2013 after playing more than 100 games for Egypt, became a national hero after winning twice the Africa Cup of Nations with his national team, in 2006 and 2008. His victories earned him the nicknames "El Magico" ("The Magician") and "Prince of Hearts" among his adoring fans.

The retired soccer icon who lives in exile in Qatar is no stranger to controversy. Earlier this year, the Court of Cassation rejected his appeal to be removed from Egypt's terrorist list for his alleged financing of the outlawed Muslim Brotherhood — an accusation he has categorically denied.

Abu Trika's scathing attack on homosexuality triggered a backlash from rights activists on Egyptian social media platforms with many referring to his offensive tirade as "hate speech." Conservatives, meanwhile, expressed their unwavering support for the soccer icon using the Arabic hashtags #we_are_all_abu_trika and #we_support_abotreka.

Although Magdi did not mention Egypt by name, the country is notorious for its persecution of members of the LGBTQ community who are routinely targeted and often imprisoned for up to five years on "debauchery" or "immorality" charges given that the country has no laws criminalizing homosexuality.

According to a 2017 report published by the Egyptian Initiative for Personal Rights (EIPR), there was a marked rise in debauchery cases between the last quarter of 2013 and late 2017, with "police targeting citizens on the basis of mere suspicion of their sexual orientation by spying on their private lives, arresting them and referring them to trial on such grounds."

Lobna Darwish, who heads the gender and women's rights unit at EIPR, told Al-Monitor that the pattern of targeting members of the LGBTQ community has remained unchanged since the end of 2013.

"In fact, not a single month has passed since without us documenting at least one new ‘debauchery or immorality’ case," she said.

Darwish said she was "neither shocked nor surprised" by Al-Azhar's recent statement on homosexuality.

"There is nothing new or different about Al-Azhar's stance on homosexuality," she noted. "What is new is that Abu Trika's homophobic remarks have sparked a healthy societal debate on homosexuality."

Darwish noted," Al-Azhar's statement on homosexuality is an endorsement of the state's bias against the LGBT community and incites violence against those with different sexual orientations who are already suffering psychological and physical aggression by the state and its health-care institutions."

"Today we are seeing an obsession with unwarranted sex change that not only goes against human nature but is unanimously rejected by all divine religions; those are despicable attempts to alter Allah's creations and give in to desires under the false pretext of freedoms," Tayeb wrote.

While gender reassignment surgeries are legal in Egypt, they can only be performed with prior approval from Al-Azhar or the Coptic Orthodox Church.

Those that wish to undergo the surgery are also obliged to seek approval from a gender reassignment review committee at the Medical Syndicate. But the committee has not convened since 2013, when Al-Azhar withdrew its member from the commission.

Those wishing to undergo the surgery have had no choice since but to turn to private clinics and hospitals. A fatwa issued in 1988 grants permission to perform sex change operations as long as a reliable doctor concludes that "there are innate causes in the body itself," in reference to cases where there is a buried female sexual organ or a covered male sexual organ.

Malak el-Kashif, who was born male, changed her gender after undergoing sex reassignment surgery in a private hospital in Cairo in 2019. She fears that Tayeb's recent Facebook post and the ensuing statement published on the Center for Electronic Fatwas' Facebook page are a foreboding of further challenges ahead for members of Egypt's transgender community.

Kashif told Al-Monitor, "Al-Azhar is fueling the prejudice against the LGBT community and giving Egyptians the green light to attack and perhaps even kill us, and it makes me very scared."