Egypt's Al-Azhar lashes out at Disney for gay characters

Calls are growing in Egypt for boycotting Walt Disney as the entertainment giant seeks to introduce gay characters in its production. 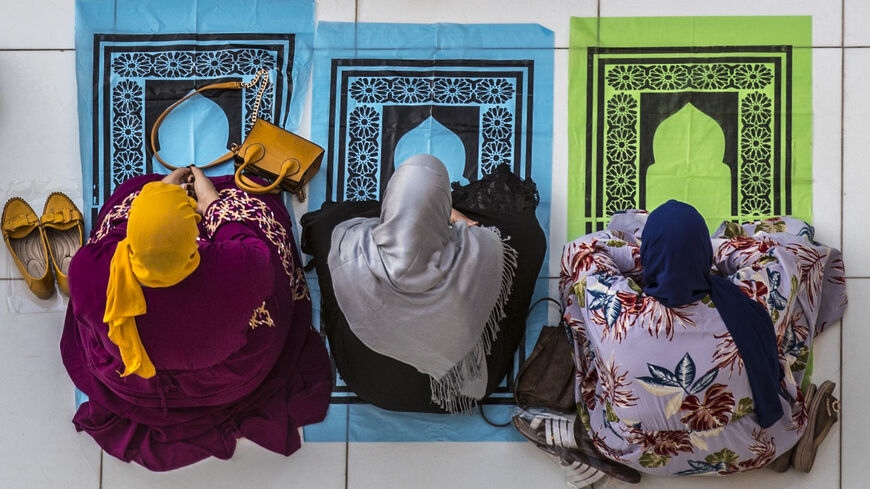 Muslim worshippers attend Eid al-Fitr prayer, which marks the end of the holy fasting month of Ramadan, at Al-Azhar mosque in the Egyptian capital Cairo on May 13, 2021. - KHALED DESOUKI/AFP via Getty Images

In a June 9 statement, the Al-Azhar Fatwa Global Center condemned homosexuality as “obscene” and “reprehensible.” It cited a “systematic diabolical plan to normalize the immoral crime of homosexuality in Muslim societies” through entertainment media content.

The plan “aims to destroy the system of moral and social values of the family institution, distort the identity of its members, and tamper with the security and stability of societies,” the statement said. “There are attempts to impose a culture of homosexuality on the Islamic world under the pretext of accepting the other.”

The statement urged parents, media institutions and educators to play their roles to enhance religious and societal values and “immunize young people against falling into the clutches of these attempts.”

Al-Azhar’s denunciation of homosexuality comes against the backdrop of growing calls on social media in Egypt for boycotting Walt Disney movies for promoting gay rights.

In March, Karey Burke, head of Disney’s General Entertainment Content, said she will seek to make its content more inclusive to underrepresented groups such as the LGBT community. “I’m here as a mother of two queer children, actually,” Burke said. “One transgender child and one pansexual child, and also as a leader.”

The Walt Disney official said she supports featuring “many, many” characters who are LGBTQIA, which stands for lesbian, gay, bisexual, transgender, queer, intersex and asexual.

Last month, the family entertainment company released a new fashion line featuring merchandise such as sweaters, T-shirts, baby clothes and other items, all bearing the rainbow pride flag that symbolizes the LGBT movement. Many of the products also include LGBT-themed images of iconic Disney character Mickey Mouse and the company's Star Wars, Marvel and Pixar franchises.

“Disney is the biggest content provider for children in the world. How can we protect our children?” prominent TV anchor Lamis el-Hadidy wondered on her daily program on the private OnTV channel. “We have all grown up watching Disney movies. How can I watch a gay Donald Duck or Mickey Mouse?”

Hadidy continued, “We have to think about how to protect ourselves. We must not accept this oncoming culture. We have to be aware of what is being presented to us.”

A number of Egyptian actors also came out to speak out against Walt Disney’s plans to introduce gay characters. “I refuse to participate in any production that promotes these practices,” said Sami Maghaouri, who played Sullivan’s character in an Egyptian version of the animated comedy "Monsters, Inc.," produced by Pixar Animation Studios and distributed by Walt Disney Pictures.

On June 8, Disney launched its streaming service, Disney Plus, in 16 countries in the Middle East and North Africa, including Egypt, with content tailored for a region where the population is largely young.

According to Digital TV Research, Netflix is currently the most in-demand video streaming platform in the Middle East region with more than 6.8 million subscribers, followed by Starzplay with just under 2 million and Amazon with 1.4 million.

Digital TV Research forecasts that Disney+ will become the second most in-demand streaming service in the Middle East by 2027 with 6.5 million subscribers after Netflix with 11 million.

Mohamed Sayed Abdel Rahim, a film critic, believes that any move by entertainment giants like Disney to introduce gay characters in their production will be very harmful to children.

“Children must not be subjected to any media content that is not suitable for their age,” he told Al-Monitor over the phone.

“Major companies like Disney can change the lives of people for good due to their mass production and the huge numbers of people they can reach,” Abdel Rahim said. “Such major content providers are capable of imposing any lifestyle that they want to promote.”

In March, Disney became entangled in a heated dispute with Florida Gov. Ron DeSantis over a state bill meant to prohibit classroom discussion of sexual orientation and gender identity through the third grade and requiring schools to notify parents about their child’s health care services on campus.

Disney initially remained neutral about the legislation that critics derided as a “Don’t Say Gay” bill, but it changed its position after an employee revolt. The bill was signed into law on March 28.

Abdel Rahim said that setting an age rating for online entertainment platforms is necessary for protecting children against any sexual or gay content.

“The question is, will Disney set age and content ratings for its viewers, whether children or adults? This remains to be seen.”