The company began dubbing its films in standard Arabic a decade ago, in a decision that was widely interpreted in political terms and which sparked strong controversy among Arabic-speaking fans. 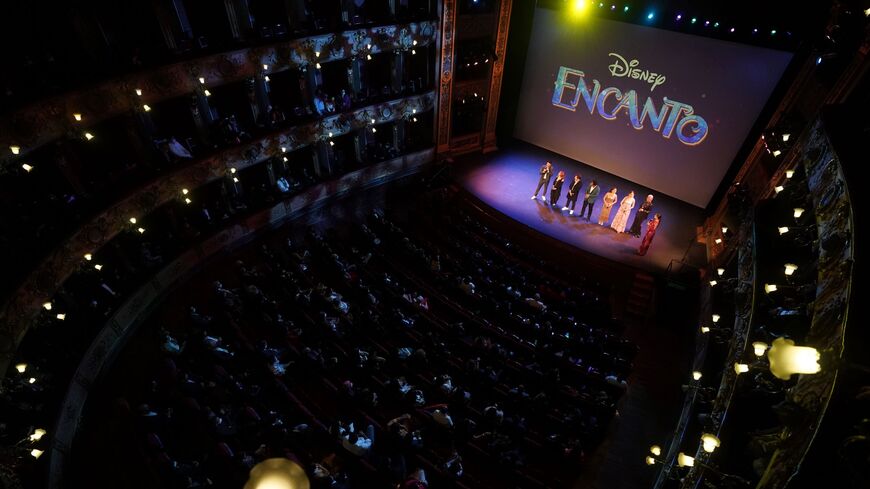 Atmosphere at the Colombia premiere of Walt Disney Animation Studios’ "Encanto" at the Teatro Colón on Nov. 22, 2021 in Bogota, Colombia. - Diego Cuevas/Getty Images for Disney

For the first time after a controversial 10-year hiatus, Disney is to release one of its films with a full dubbing in Egyptian Arabic, in addition to the standard Arabic that has been the norm in recent years. The chosen movie is the 60th film produced by the Walt Disney Animation Studios, "Encanto," a musical fantasy comedy that has received critical acclaim since it was first released in November.

The film tells the story of an extraordinary family, the Madrigals, who live in a magical house in the mountains of Colombia. Every child of the family has a unique gift — from super strength to the power to heal — except for Maribel. But she is the only one who notices that their home is in danger and who takes action to save it.

“I think Disney started offering Egyptian dubbing to their movies again for two important and connected reasons,” Nasser Al Kuwari, administrator of the popular Disney in Arabic page that first broke the news, told Al-Monitor. Audiences have consistently demanded the return of colloquial speech since the change in 2012, he said, and the Disney Plus streaming service is about to debut in the Middle East. “And although the movie has not been released yet, [there’s a lot of] anticipation and joy,” he noted.

Since the 1970s, Disney’s most famous movies were dubbed into Arabic in the colloquial Egyptian dialect, which is widely understood across the Middle East. The films included songs and cultural phrases which in the eyes of many viewers made it possible to keep a local touch. Stars of Egyptian cinema, such as actors Abdel Waress Assar, Mona Zaki and Amina Rizk, participated as voice actors in some films.

Yet the release of Disney’s film "Secret of the Wings" in the Arab world in 2012 represented a radical departure from this dubbing tradition, as it was shown in standard Arabic. A year later, Disney signed an agreement with the Qatari-based media conglomerate Al Jazeera for the distribution rights of most of its cartoon series and several of its most iconic films, which were all redubbed into standard Arabic. In the following years, new Disney films continued to be dubbed in standard Arabic, with some of them causing great controversy.

“In the industry, to use modern standard Arabic meant forcing people to speak a language that was not supposed to be spoken, and I realized they were trying to come up with the right pronunciation for a language they just read,” said Elena Di Giovanni, a professor at the University of Macerata, Italy, who was in Egypt in 2015 to train media professionals in audio description. “Using it for dubbing was like forcing something into a system that never received such a language,” she told Al-Monitor.

The choice of Egyptian Arabic, a colloquial and less formal variety used for speaking, or standard Arabic, mainly used for writing and in formal contexts, is not a trivial decision. Research has found that Egyptian Arabic is the preferred choice in products deemed to entertain, to be funny, and to target an audience both of children and adults. Perhaps more important, the choice is also associated to non-linguistic interests, and Al Jazeera may be trying to construct a more culturally and socially homogenous Arab identity and project certain values.

On social media, Disney’s decision to use standard Arabic was met with widespread backlash. Particularly in Egypt, campaigns and online petitions to undo the change were launched and amassed millions of followers. Two of the most popular were “Disney must return to being Egyptian” and “Return the Egyptian dialect to Disney movies.”

“The dubbing into Standard Arabic was very ridiculous, unlike the Egyptian dialect,” read a comment from a Facebook user reacting to the news that Disney will include Egyptian dubbing in "Encanto." “Egyptian dialect is funny, but the standard Arabic dubbing is not,” wrote another user, who like most people commenting praised the news. “I adore all the cartoons that are in [Egyptian] slang. I don't want to watch at all any movie in classical Arabic, no matter how good it is,” read a third.

Some of these campaigns blamed the change on Disney’s expansion in the Gulf and the company’s alleged desire to adopt a more conservative direction than Egypt’s culture and dialect. For example, it has been noted Disney’s redubs into standard Arabic frequently deleted the words "love" and "dance."

“Imposing modern standard Arabic for dubbing came with a lot of manipulation in terms of meanings in the translations. It was not just about switching to a new language,” said Di Giovanni. In the original "Cinderella," she said, "all references to love had to be changed. … Sometimes instead of saying ‘I love you’ they would say ‘I am not going to leave you’, but no mention to love.”

In the direct-to-video "Cinderella II" from 2002, Di Giovanni said, the title character had learn "how to dance appropriately, and dancing was one of the taboo concepts. So, they were asked to delete all references to dancing, but you could also see the characters in the cartoon dancing. It was very weird.”

Arabic-speaking Disney fans also considered the Egyptian dubbing to offer a distinct sense of humor and to give a soul to the characters and the movies that was missing in standard Arabic. Public figures and celebrities, such as the actor Mohammed Henedy, also joined the crowds asking for the return of the Egyptian dubbing.

“Films in Egyptian and with Egyptian stars gained great fame, to the point that usually Disney films had a part of comedy in Egyptian dialect that was very good, it was fun — while the comedy in standard Arabic was not, or it was not as powerful,” Ahmed Mubarak, one of the promoters of the “Disney must return to being Egyptian” campaign in Egypt, told Al-Monitor. “I am very happy with Disney’s decision."

In Egyptian dubbing, "Disney’s characters are real and full of life, they feel joy and sadness, they act and think like all of us, they are not robots that speak a language that none of us use in their daily lives, a language that only we hear on the news or documentaries,” said Al Kuwari, who is Qatari. People don't remember any of the dialogues in standard Arabic over the past 10 years he concluded, "but they remember a full dialogue of a movie that was dubbed in Egyptian.”