After an Egyptian singer released a ballad in support of US President Donald Trump, his fellow citizens questioned whether it was a mockery of Trump or expressed real support for the US president. 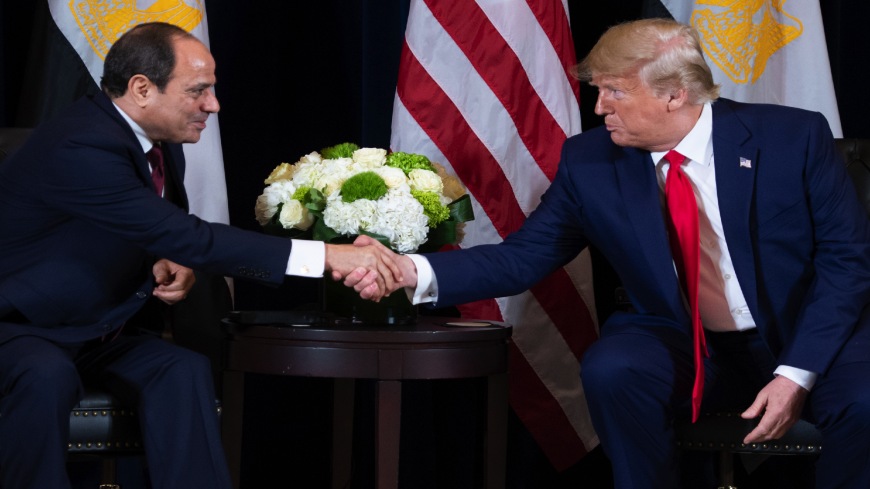 US President Donald Trump shakes hands with Egyptian President Abdel Fattah al-Sisi during a meeting on the sidelines of the UN General Assembly in New York, Sept. 23, 2019. - SAUL LOEB/AFP via Getty Images

CAIRO — An Egyptian singer’s ballad in praise of US President Donald Trump has gone viral in recent days, highlighting the growing support the US president has among supporters of Egyptian President Abdel Fattah al-Sisi.

These are the lyrics Wissam Magdy composed to express his support for Trump in the US elections set for Nov. 3.

The song was not a success merely because it’s sung by an Egyptian artist in support of a US president — one of the most controversial presidents in US history — but also because it is the English version of the famous 1999 Egyptian operetta, "Ekhtarnah" (Arabic for “We Chose Him”). The latter was performed by 13 Egyptian singers, in partnership with the famous composer Ammar al-Sherei, to express support for late Egyptian President Hosni Mubarak. Magdy simply changed some words and sentences in the English version and altered the melody slightly.

"Ekhtarnah" was controversial when it was first presented, as many opponents of Mubarak at the time claimed that this group of artists had performed this song under pressure from state agencies or to “mock the authorities,” as some put it.

In this regard, Magdy told Al-Monitor that he did not intend to achieve any political goal from the song, and that American voters have most likely already made their decision regarding the choice between Trump or his rival, former Vice President Joe Biden, and will not be affected by a song launched by an Egyptian singer in support of either of the candidates.

Osama Ramadan, a US citizen and one of the founders of the Facebook page Arab Community in the US, told Al-Monitor that the song will only affect American voters who speak Arabic, or perhaps only those who know Egyptian songs well and “who represent a small number of voters.”

Ramadan added, “The song gives the impression that not everyone in Islamic countries and the Arab world expresses hatred toward Trump, as some opponents of his claim.”

Speaking on the purpose of singing an English version of "Ekhtarnah," Magdy said that he simply found it comical, explaining, “I put myself in the shoes of someone who wants to express support for a US president using the same or similar words, the same melody, but in English. Trump was the most logical choice since the song was originally written to voice renewed support for a president (Mubarak), not for someone like Biden running for the first time.”

He added, “I did not mean to either ridicule or support Trump, because I am an Egyptian citizen and only an American citizen can have a say in the elections. However, I do value Trump for many of the positions in which he supports Egypt. Had he had any hostile intentions or positions toward the state, I would not sing for him.”

Magdy began his artistic career with the Egyptian band Art Compilers in 2014, but following the death of one of the members and after other members left the country, the band fell apart. Magdy is a 34-year-old electronics engineer who continued his journey in dubbing or translating songs with his sister Raneem, who is a song director, and music arranger Tariq Khalifa.

He provided translations and voice-overs for over 100 songs from the Arab and Egyptian classics into the English language, most notably the religious invocation "Moulay Eni Bi Babak"  (Arabic for “My lord, I am at your door”) and the Egyptian and Saudi national anthems, in addition to dubbing a number of famous films and television clips. His Facebook page has about 14,000 followers.

“Translation/dubbing can be a language of communication between peoples, and we try to convey a message to the peoples of the world through art, which is that Egypt and the Arab countries are peaceful and civilized countries. We aim to show that our history, culture and artistic heritage deserve to be an asset in the world’s art and culture,” Magdy noted.

“The aim is to bring the Egyptian artistic heritage to the world for it to become known and pleasing to all peoples through translation and dubbing. We also aim to establish the first entity specialized in dubbing artistic content from Egypt and all Arab countries. In this context, we communicate with a large number of young people who are fluent in foreign languages and proficient in dubbing. We also seek to import or establish a technology that addresses the traditional defects of dubbing, such as inconsistency in lip movement with words, which can be corrected as much as possible now through artificial intelligence programs,” he added.

Regarding obstacles he and his team face in their work, he said, “We face difficulties in advertising and financing our business. I hope the song ‘We Chose Him’ would receive offers from production companies to finance our business professionally.”

Magdy hopes to be able to cooperate with Egyptian production companies in dubbing their cinematic and television works into foreign languages and relaunching them through global platforms such as Netflix, especially as production stalled due to the outbreak of COVID-19.

“Since the production of new works of art has become difficult nowadays, dubbing Arab works and selling foreign versions abroad could be a successful investment. I also hope to sing some translated songs at the opening of the new Egyptian Museum,” Magdy added.

Art critic Nader Adly believes that the success of "We Chose Him" proves that translating Arab classic songs into English can indeed be a triumph. “Although some language-specific qualities and the connection to the surrounding society can be lost in translation, the success of ‘We Chose Him’ is proof that dubbing can be a hit and influential if it is presented and promoted in the right context and timing, such as of the US elections here,” he told Al-Monitor.