The Egyptian band Art Compilers has been translating well-known Islamic songs into English, but the jury is still out on its success. 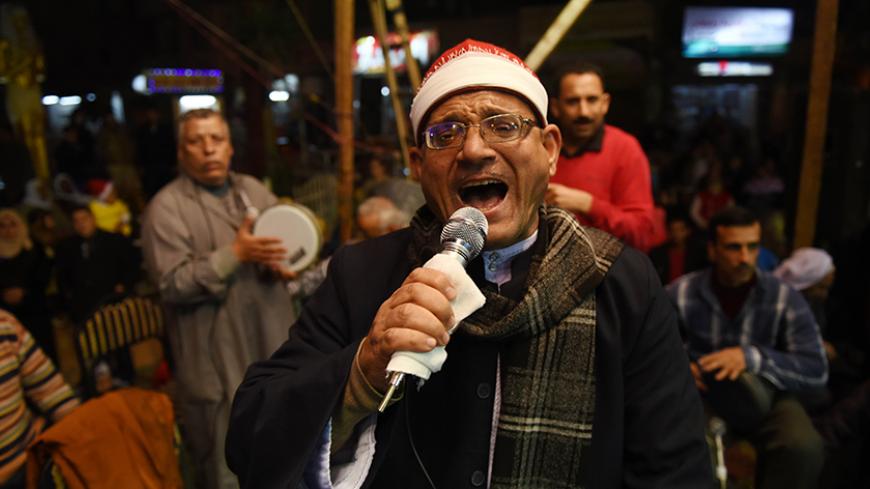 Egyptians take part in a parade marking the 1,445th anniversary of the birthday of the Prophet Muhammad in Menoufia governorate north of Cairo, Egypt, Dec. 23, 2015. - MOHAMED EL-SHAHED/AFP/Getty Images

"My Lord, I am at your door and I have spread my hand" is a well-known "nasheed," or Islamic song, among Egyptians and Arabs. Sung during religious celebrations, especially during the month of Ramadan, this Arabic gem, like many others, is a big challenge for anyone who wants to express the same sentiment in English — as  the Art Compilers band discovered in June.

The Art Compilers, an Egyptian band of five lyricists and musicians, in 2014 started working on 74 traditional Egyptian songs, but only decided to publish some of their work in 2017. Earlier this year, the band's Facebook page was launched and when they posted the video June 17 of their first work — “My Lord, I am at your door” — it was viewed more than 4,000 times, received more than 100 likes, dozens of comments and 32 shares.

The 1972 Islamic song was written by famous Egyptian musician Sayyid al-Naqshabandi, composed by musician Baligh Hamdi and recited by religious poet Abd al-Fattah Mustafa. It is considered one of the most famous Islamic songs —  also called "supplications," where singers signal their devotion to God and plead for happiness — of all time. Subsequently, Naqshabandi, Baligh and Mustafa collaborated on five similar Islamic songs.

The Art Compilers’ idea of translating the Arabic-language supplications into English has attracted both the attention of social media users and the media, with several newspapers and other news sites reporting on the band. On June 18, Al-Youm Al-Sabeh, Egypt’s most popular news website, published an article titled “Art Compilers creatively translate Arabic songs into the English language.”

The article asked, “Why keep Muslims who cannot speak Arabic from the spiritualism brought by these songs and limit those Muslims’ experience of these songs to the music alone?”

Wissam Magdi, the founder of the band and an engineer who specializes in electronics, told Al-Monitor that he wanted to bring the Egyptian singing heritage to the global stage to make it more accessible to more people, particularly those who do not speak Arabic. “Moreover, the translation of Arabic songs into English will help Egyptian and Arab youths in general to learn the English language through music and songs whose meanings they already know,” he said.

Most of the translation of the lyrics into English is done by Magdi, while his bandmates — Muaz Salim, Ahmad Abd al-Aal, Muhammad Abd al-Shafi and Abd al-Rahman Shararah — work on the melody and set the English lyrics to the music. They ended up with English-language Islamic music that reaches non-Arab Muslims and others who love Sufi music, or what they call spiritual music.

The work of the Art Compilers is not limited to supplications and religious songs. They have also translated songs of what Egyptian audiences used to call "songs of the golden age," such as songs by Umm Kulthum and Abdel Halim Hafez. They also translated songs popular in the 1980s and 1990s, such as works of Mustafa Qamar and Amr Diab.

Magdi noted, “Music is a language of communication between peoples, and we have succeeded in breaking the barriers of language and delivering meaning in other languages. We aim to send a message through art to the peoples of the world that Egypt and the Arab countries are peaceful and civilized states with art, culture and heritage that is worth sharing. Our culture and arts deserve to be preserved in global repositories of art and culture. Egyptian innovation did not stop during the Pharaonic era and continues to this day."

He also admitted that this was no easy task, as in the English translations it is not always possible to keep the same rhythm and musicality as the original Arabic version. Also, the symbolism and the spirituality in the songs make literal translation difficult. For instance, they changed "My Lord, I am at your door and I have spread my hand" to "I have raised my hand," because this is more accurate in English.

Magdy noted, “We also face minor difficulties in disseminating and funding our work." Yet added, "We can overcome these with the opportunities available."

In a Facebook post, the Art Compilers asked their followers to suggest songs they would like to see translated and performed in English, specifically for Eid al-Fitr: "We will start with the song that is requested most. Happy holidays.”

Commenting on the Art Compilers’ public request, Ashraf Abd al-Munam, a professor at the Music Institute at Cairo University and a music critic, told Al-Monitor, “By translating — whether from Arabic to English or vice versa — artistic work can lose some of its value. Sometimes it is impossible to translate the whole song because the lyrics cannot follow the same rhyme and rhythm in another language. Then the band resorts to translating the opening verse alone. But there is no doubt that the Art Compilers' experiment deserves attention because it is transmitting Egyptian and Arab culture and music to a wider audience.”

Zayn Nassar, a professor of music criticism at the Academy of Arts, told Al-Monitor, “The Art Compilers' experiment represents a genuine effort to transmit Arab and Egyptian heritage to a global audience — even if it has faced problems of funding or it was impossible to translate all the songs in full. Not all of the songs may have been successful or widely distributed to a non-Egyptian and non-Arab audience, since the non-Arab musical ear is used to a certain rhythm, styles and Western musical instruments, which are totally different from Arab music. It is possible that Arab music will not find wide dissemination among a foreign audience for decades.”