Can this mystical musical tradition make comeback in Egypt?

Some Egyptian artists are attempting to revive Zar folk music, believed to have been brought to Egypt from Ethiopia and Sudan. 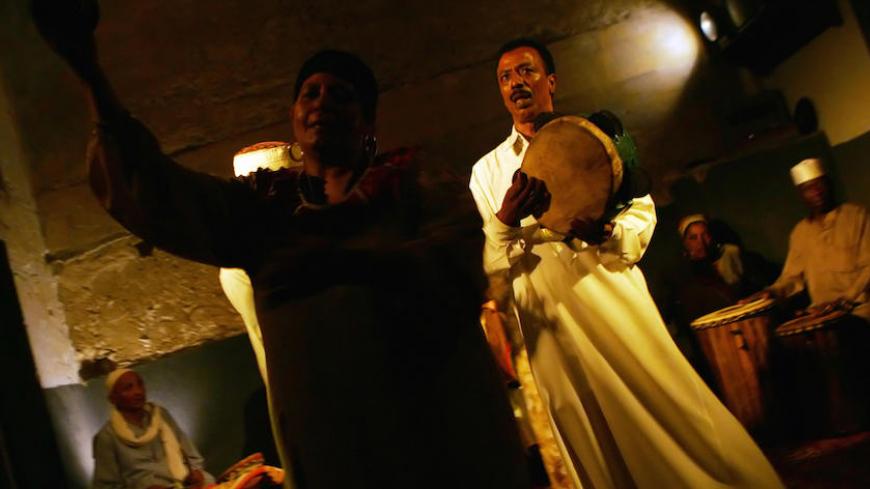 CAIRO — In a narrow alleyway in the Abdin neighborhood in central Cairo, the band Asyad el-Zar (Zar Masters) performs a traditional show the first week of every month in a small theater located in the midst of old houses. The sounds of tambourines and traditional musical instruments are central in these performances to remind Egyptians of the Zar art, which has been disappearing gradually from Egyptian folklore in the past two decades.

Zar shows aim at “reviving folk music, searching for it in its source and presenting it to the audience,” Zakaria Ibrahim, the founder of El Mastaba Center for Egyptian Folk Music, told Al-Monitor. “Zar is disappearing in Egypt. Those who know it and practice it are having trouble keeping it alive.”

Zar is the oldest form of Egyptian folk music, and historians have disagreed over its origin. Some believe that it originated in Ethiopia and Sudan and from there it moved to Egypt then to some other Middle Eastern countries. Egyptian Zar intertwined with the Sudanese version, with the influx of Sudanese migrants to Egypt during Mohammad Ali’s era in 1820. The Sudanese tanbura (a six-string lyre) and rango instruments became integrated in the Zar music. As a result, several types of Zar music could be distinguished: Egyptian Zar, which involves tambourines and drums; Sudanese Zar, which involves the traditional tanbura; and Abul Gheit Zar, which brings in Sufi songs and tawshihat (spiritual hymns). Egyptians, especially women in popular neighborhoods and villages, have always linked this last type to superstitions and exorcising demons and jinn, genies from Islamic mythology.

A typical Zar performance opens with calm rhythms of tanbura and rango, coupled with songs including words in Sudanese and local Egyptian accents from Upper Egypt and Port Said. Then, the drums and tambourines come in to include fast and successive beats that change the ambiance to make it more exciting and luring to engage the audience and encourage them to interact with the music. A dancer strapping a belt with goat hooves around his waist (known as the mangor belt) adds to the sound of traditional instruments made of animal leather and derivatives.

Hassan Bergamon, a member of the band, is one of the last remaining people who play the Sudanese rango in Egypt. He told Al-Monitor, “I was born in Cairo after my parents came here in the 1930s to work. I learned to play the rango from my father, but when this form of art started disappearing, we would sing and play in Zar ceremonies.”

He added, “The rango and tanbura are Sudanese instruments that our ancestors brought along when they emigrated to Egypt, and their rhythms are in harmony with Zar music.”

Zainab, a woman in her 60s, has performed in Zar ceremonies since her childhood, as her parents would hold these parties at their house in the Port Said neighborhoods. But the ceremonies stopped for lack of demand from the locals.

Surrounded by a bunch of women attending her show, she told Al-Monitor, “Most of the people who come to these ceremonies are women. They leave with high spirits, and they feel they released bad energy and psychological repression. Some are touched by sad songs or roundelays, while others get excited when hearing the fast-paced music beats.”

Although Zar culture is disappearing in Egypt, Zainab said, “There are a few demands for holding Zar ceremonies in certain houses. But with the rise of the Sunni groups in Egypt, the art of Zar is under attack, as it is linked to jinn and superstitions. But it is initially an innocent spiritual rite that has nothing to do with the criticism it gets.”

Ibrahim said, “Zar started out as a ritual rather than a celebration, because it is believed to be a traditional remedy for spiritual problems. Far from disputes about its ideological background, the fast rhythm and singing and dancing in Zar ceremonies aim at releasing negative vibes and repression.”

Many theatrical works in Egypt have linked Zar to the world of jinn, sorcery and blasphemy. This gave it a stereotypical image and socially stigmatized it.

Mazaher al-Zar is another band formed by Ahmed el-Maghribi, the head of the Egyptian Center for Culture and Arts. The center has been welcoming Zar artists in Egypt since 2002, as they meet up to hold weekly ceremonies on a stage that was inspired by traditional heritage in Cairo.

Maghribi told Al-Monitor, “These ceremonies revive the enthusiasm to participate in collective singing and hadra (collective supererogatory ritual), and they include musical performances that reflect a positive image of Egyptian culture, at a time when Egyptians themselves undermine their heritage sometimes.”

He noted, “Zar reveals the African aspect of Egyptian art. The historical contact between Egypt and the African countries started in Nubia in Upper Egypt. The musical analysis of Zar shows a richness that goes years back. But there are no real studies about the Zar music because interest in it focuses on its humanitarian and psychological aspects only.”

In an attempt to revive interest in Egyptian folklore, Zar has been elevated from being practiced in popular neighborhoods to being performed on the stages of cultural centers. These attempts also aim at banishing the stereotypes that have stigmatized Zar performance sometimes and classified it under blasphemy and ignorance. This form of art is now being added to the ancient Egyptian heritage whose scope was expanded to include the African musical heritage also.