The art of hand clapping makes comeback in Egypt

The Arab folk art of hand clapping was on the verge of dying out, but a musical group in Egypt has revived the practice. 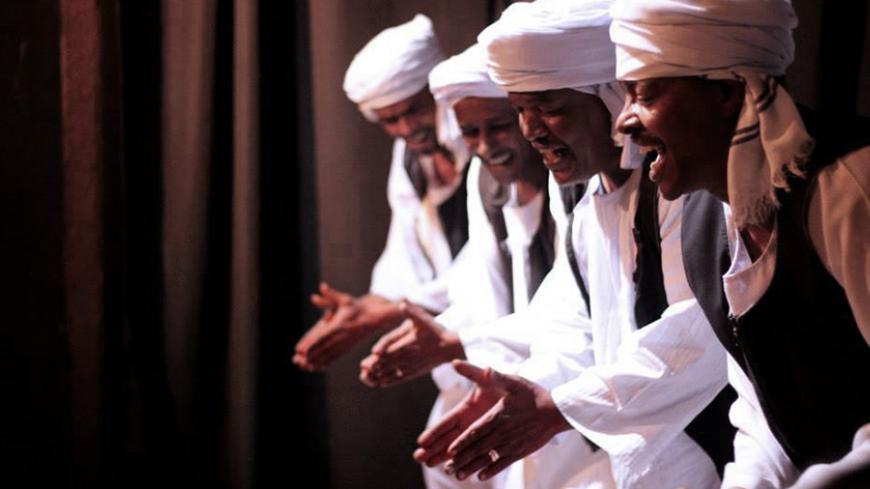 Before the emergence of musical instruments, humans clapped their hands to define and create the rhythm of music. Actually, hand clapping was an art of its own. Dating back to the days of the pharaohs, the art of kaff — Arabic for palm clapping — flourished in the Arabian Peninsula. Improvisational poetry is considered part and parcel of this art. With an ingrained love for kaff, coupled with a genuine passion to revive and preserve it, the band Kafafa (Hand Clappers) formed in 2013 to bring the folk art of kaff back on the scene. Kafafa is Egypt's first band to perform and resurrect kaff.

At Kafafa's shows, the audience can see how the ancient mingles with the modern, how creative poetry is improvised on stage and how hand clapping harmonizes with the rhythm and the choreographed steps. The band's distinct performances have earned it a solid fanbase. By interviewing Kafafa members, Al-Monitor sought to investigate the origins and the rules of kaff.

Kafafa was founded in Upper Egypt's Aswan, where many diverse Arab tribes reside. The group consists of 12 artists, including palm clappers, singers and drummers.

"Kaff was on the verge of extinction and, consequently, the heritage of our Arab ancestors was going to fall into oblivion," Kafafa co-founder Mohamed Madany told Al-Monitor. "Therefore, I decided to form the band to resurrect this art and to demonstrate our Arab identity. This is evident in our shows. Kaff is pure folk art, and Upper Egypt is considered its hub."

Poetry improvisation, according to historians, thrived in the pre-Islamic period, when poets demonstrated their eloquence by improvising melodic verses in places like the Ukaz Market of Arabia. These poems dealt with topics like joy and sorrow, melancholy, love, defeat and victory.

Later, when the art of kaff emerged, Arabs codified certain rules for the practice. The hand clappers should begin by reciting certain verses in honor of the Prophet Muhammad and then follow it with a ballad. Then, the singer is to improvise rhymed poetry dealing with a certain theme determined by the clappers. Hand clapping, meanwhile, defines and accompanies the rhythm. The Kafafa band follows the same approach, fusing these traditional rules with modern techniques to make their shows appealing.

"In the past, daf — the large frame drum — was the only instrument used in this art," the Aswan-born Madany said. "I have introduced the lute beside the daf. Additionally, hand clapping determines the speed of the rhythm, and the musical instrument should follow the clapping rhythms. The clappers also dance by moving their shoulders and feet in an exciting choreographed show."

Rhythms softly fall and rise according to the claps: A single clap is for a low rhythm, and the double clap is for an intermediate one. Three claps signal the highest rhythm, he added.

Madany said the band's songs deal with all aspects of life and are considered a mirror of society's conditions. Heritage poetry, he added, reflects the political, social and economic conditions under which it was produced. "The heritage songs were improvised and then they got etched in memories," he said. "In our shows, we present a mix of old and modern songs along with the songs being improvised on the stage. Kaff, in this way, is feeding souls and minds. There are no obscene words and all family members can attend our shows."

Since 2013, the band has never rehearsed before concerts, even though our show may last 90 minutes, Madany said. "We depend on our talent. Smooth and spontaneous performance is the secret of our success. Heartfelt songs are being improvised on the spot. Though some techniques have been introduced to this art, its spirit has never changed. This is what makes kaff different from other folk arts."

Kafafa joined Egypt's El Mastaba Center, a hub for folk art performances and education, in 2013 and has performed at the Cairo Opera House and other cultural centers across Egypt, garnering widespread admiration. The band has also organized several shows to promote tourism in Egypt.

Madany said that the band's shows appeal to almost any audience, including foreigners. "Many foreigners have attended our concerts. They enjoyed the kaff — though they do not understand the meaning of songs — since they felt its spirit. They enjoyed the unique blend of claps, songs and dance, which gives them a passport to the Arab culture," Madany said.

Abdelwahed el-Banna, Kafafa's singer and co-founder, said the band's uniform includes a vest, a turban and white robes with pants (sherwal) underneath. "These were the typical clothes of our Arab ancestors," he said. "They are also the traditional clothes of people in Upper Egypt. We want to make our culture discernable through the band's uniform, songs and dance. This is our main and ultimate target."

Banna said that the kaff singer is different from any other singer and should have certain qualifications. "Any singer should have a beautiful singing voice. But in kaff art, voice only is not enough. The singer should be witty and talented enough to improvise poetry on any topic. For sure, he should also enrich his knowledge of various issues to be able to improvise. Without this talent he cannot be a kaff singer, since improvisation is an inherent part of this art."

"In the future, we hope to open a school to teach the young generations this priceless art," Banna said. "We want to prepare more cadres in this field. This is our heritage and we are responsible for protecting it. We hope that we will be able pass this art to our sons to ensure its continuity."