All female dance groups in Egypt are becoming more popular at weddings and other cultural gatherings, but still must conform with society's conservative beliefs on music. 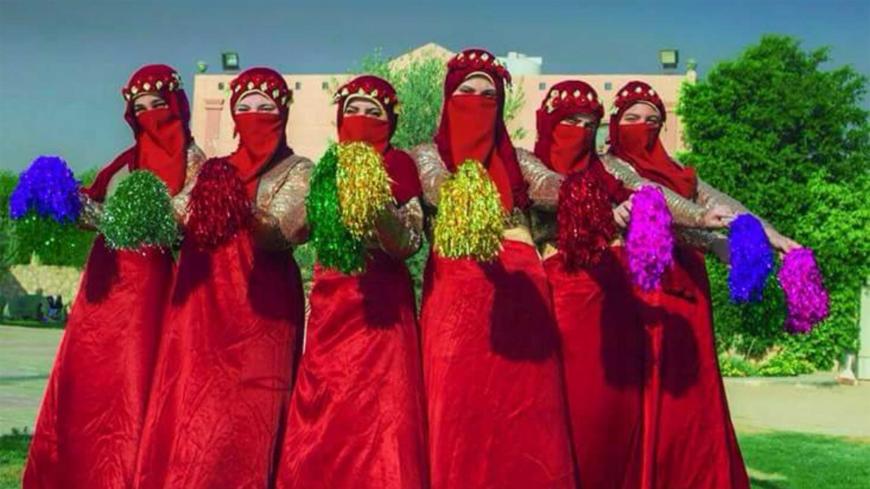 Female Islamic bands are emerging as a new fixture at women's celebrations around Egypt. Fully or partially veiled, and wearing sparkling but unrevealing clothes, they perform at weddings, where men and women are segregated, and at henna parties, where women come together before a wedding or to celebrate a birth.

The bands purposely do not violate Sharia in their performances. The douf (tambour) is often the only musical instrument they use, although there are exceptions, and the groups only appear at women-only events. Their repertoire tends to consist of Egyptian rustic wedding songs.

Music is a controversial issue in Islam. While certain branches such as Sufism consider music central to their religious rituals, some conservatives consider it to be a tool of intoxication, especially songs with non-religious themes and those sung by women. The Quran, however, does not forbid music, nor does any Islamic country forbid all music.

The El-Hanaa Band for Islamic Weddings is a recently established troupe, launched by six fully veiled sisters who have a passion for singing. "We started as six sisters, but now we have around 25 young women who work with us," Somaya Akl, the troupe's founder, told Al-Monitor.

El-Hanaa not only sings at performances, but also organizes entire events, including renting the event space and decorating it, and if requested, even doing the bride's makeup. The troupe also has a camerawoman and DJ. Unlike more conservative bands, they also offer to perform Indian dances and Egyptian folk dances. During the shows, performers sometimes remove their hijabs and dress in costumes depending on the show. Photos and video recordings are prohibited during the unveiled moments.

"We aim to make people happy in a halal kind of way," said Akl. "I may agree to play one non-Islamic song for the bride’s entry, but it should be related to weddings and have appropriate lyrics."

El-Hanaa, founded three years ago and based in Cairo, has performed in governorates around Egypt, but some Egyptian Islamic bands have performed in other countries. El-Shaymaa Band for Islamic Weddings, one of the biggest troupes in Egypt, was established 10 years ago in Cairo and has performed in Oman and the United Arab Emirates.

Troupe founder Shaymaa Abdel-Hamid told Al-Monitor that her band's performances do not include music in the traditional sense, but does use electronic drums, which people appear to enjoy. Abdel-Hamid, who normally wears a veil that covers her entire face, said fully covered women typically face security-related harassment, especially if traveling outside Egypt, because the veil conceals their identity.

"I don't allow [band members to wear] veils that cover the whole face while traveling, because they usually get inspected by security forces in checkpoints," Abdel Hamid told Al-Monitor. Instead, for performances abroad she insists that women wear headscarves.

Founded in 1997, the Banat Sondos Islamic Band is thought to be the oldest female Islamic band in Egypt and the only group to have produced an album, "Zay el-Banat" (Like Girls in Arabic), released in 2002. The band is different from many other female groups in that its songs and dance performances are backed by music, rather than electronic rhythms or drums only.

"People have became more open-minded than before," said Rehab Salama, the troupe's founder, to Al-Monitor. "They began to think that music is OK and that a song won't send us to hell." Still, even with bands' self-imposed restraints, some conservatives criticize them for using or playing music in their performances and for singing.

"When we released our album, some conservative people criticized us for recording songs with our voices, considering it a sin, although we sang songs that are conservative," said Salama. "This is because some still believe that a woman's [singing] voice should not be heard by men.” Some believe that women should stay at home and raise children.

Banat's lyrics, like those of similar bands, praise marriage as devotion to God, praise the beauty of the bride, praise the bride and groom for being religious and as deserving the best. Usually the songs invoke God’s name, asking him to grant a couple happiness. They do not use words such as kiss, hug, love and adore or that in any way contradict Islamic morals.

Hala Farouk, a fully veiled housewife who studied Sharia, said all Muslims should be supportive of the gender-segregated Islamic tradition of weddings and the performances. "Islamic concerts and weddings give women freedom to dance and dress as they want," Farouk told Al-Monitor. "I believe that these female troupes are a very good thing, which used to be rare in the past."

Female troupes remain fairly uncommon in Egyptian society, despite its rich cultural heritage of classical music and songs made famous by the likes of the legendary singer Umm Kulthum, the "Star of the East," the composer Mohamed Abdel Wahab and the popular singer and actor Abdul Halim Hafez, among others.

Hatem Hafez, an Egyptian writer and lecturer at the Academy of Arts in Cairo, told Al-Monitor that "Islamic" weddings and troupes have nothing to do with Islam or the arts.

"The concept of an 'Islamic wedding' spread after many things were Islamized beginning in the late sixties," Hafez said. "Since then, some concepts like Islamic clothing, an Islamic economy and Islamic rule have appeared, but all these concepts have no intrinsic meaning. They are only attempts by some people to recall the past of the Arabs, the so-called golden era of Islam."

Hafez further stated, "People who glorify the Arabic past do not understand that the way the Arabs used to live in the first century AH [anno hegirae] was their culture at that time and had nothing to do with religion. Islam only influenced their ideology and behavior, not their way of living, which included their attire, food, way of eating and drinking."

Hafez added, however, that Islamic-themed music has become an international phenomenon. The US band Native Deen combines hip-hop and rap with lyrics related to Islam, and the British singer Sami Yusuf was popular in Egypt for a while.

"I believe that there are some unsuccessful attempts to create an Islamic art, which is [actually] mixing Bedouin style with modernity," Hafez said. "However, real Islamic art is found in the architecture, calligraphy and ornaments that emerged naturally in past eras and will remain until the end of the world."