Some Syrians in Egypt have formed bands to make a living and remember their homeland through music. 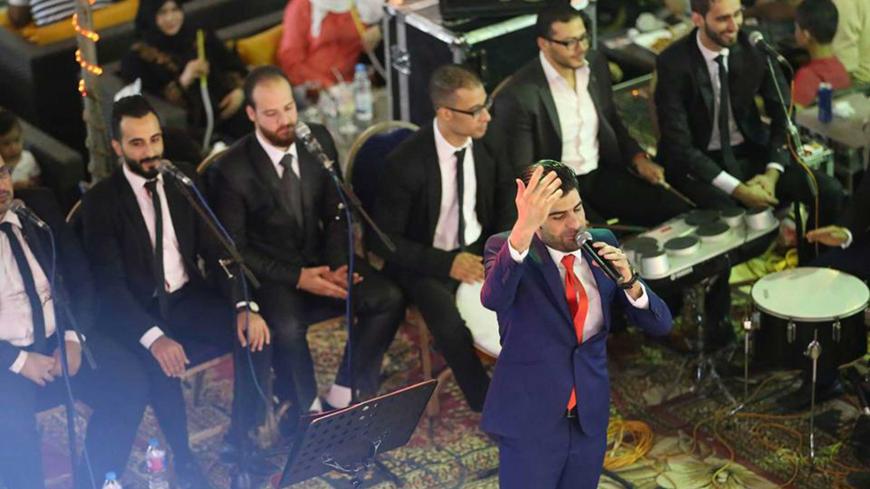 The Syrian singer Abdal Haleem Ajm performs with his band in an image uploaded Sept. 9, 2016. - Facebook/abdalhaleemajm

Abdal Haleem Ajm, from eastern Ghouta in the Damascus countryside, was a popular singer in Syria. When the war broke out in 2011, it interrupted his career, and Ajm moved to Cairo with this family, thinking it would only be for a short stay. Five years later, he is still in Cairo.

“When we arrived in 2012, I thought we would be back home within a few months, and I would rejoin the band I had formed before the war erupted,” Ajm told Al-Monitor. As Ajm's stay in Egypt extended to one year, then three years, then five, he decided to form a band of Syrian musicians in Cairo. His new group carries his name, Ajm.

For Ajm and his colleagues, as well as other members of the Syrian community in Egypt, Syrian songs are a way of staying connected to their war-ravaged homeland.

“Of course, the majority of my performances are for Syrian audiences, but with Syrian songs becoming popular in Egypt, many Egyptians started requesting Syrian bands at their events,” Ajm said.

Ajm's all-male band consists of seven Syrians who migrated to Egypt to escape the war. They all play percussion instruments. There is one Egyptian drummer, and the sound engineer is also Egyptian. Ajm is the group's lead singer.

“The Syrian audience at events where we perform is great,” Ajm said. “Some just come without knowing who organized it or performs at the event. They just want to hear Syrian songs that remind them of their homeland.”

Ajm also remarked, “Event organizers often make their events open to the public, and identify which band is performing, so anyone can attend. In addition, I always share the event’s information on my personal Facebook page.”

Asked about obstacles he has faced in Egypt, Ajm said, “I have not encountered any obstacles worth mentioning, but I did have a problem with registering the members of my band in the Egyptian Musicians Union. However, the union did not [stop us from performing].” The union gave the band a temporary work permit, until the registration process is completed.

Ajm mentioned that he performed at one event where he sang a song about fathers and the motherland, and a good number of people, Syrians and Egyptians, broke down in tears. When it was time for him to hand over the stage to another performer, the audience requested that he play on.

Typically, Ajm honors Syria's cultural heritage at his performances by playing traditional songs. Since he has been increasingly appearing at Egyptian events, however, he now mixes these songs with traditional Egyptian works.

Syrian parties usually include performances by Zaffeh groups in addition to traditional songs being played. The members of the former groups perform at weddings, wearing traditional Syrian attire and reciting odes about Syrian values, masculinity and chivalry. They also salute guests and hosts at wedding celebrations. The troupe members play bagpipes and drums and in some regions perform a dance with swords. The lead singer usually stands in the middle of the other members, who encircle him while singing, dancing and drumming.

Although Zaffeh groups usually only borrow from Syrian folklore, as they increasingly perform in Egypt, they have incorporated some distinctly Egyptian terms and slang into their odes.

When Syrians fleeing war began settling in Egypt, their main destination was 6th of October, a city in the Giza governorate. Zein Mustafa left Aleppo and found stability in Egypt four years ago. He still misses his motherland, though. The only things that help him deal with his homesickness are the Syrian bands and groups performing in Egypt these days.

Mustafa told Al-Monitor, “I keep track of all the events happening in 6th of October to find out when Syrian bands are performing so I can attend and enjoy Syrian songs.” Explaining the effect songs have on him, Mustafa said, “I feel like I am transported back in time and space to the streets of Aleppo and Damascus, as if the war never erupted, and I never left.”