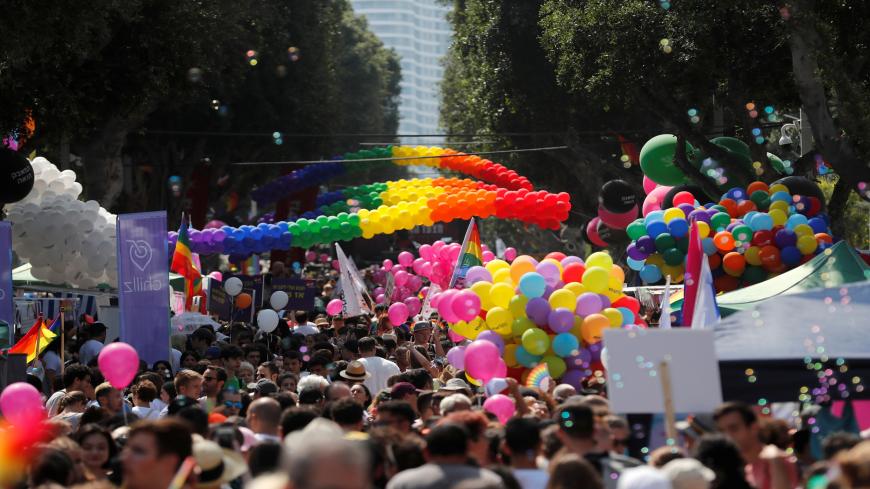 The Tel Aviv-Jaffa municipality announced June 21 that it would allow cohabiting couples to register their union in a declaration at the city hall. Thus, these couples would enjoy the same municipal rights as married couples. This would mean that same-sex couples and other couples who cannot wed under Israel’s religious authorities could now be eligible for housing tax discounts and could enroll more easily their children in public day care centers, schools and activities at community centers.

In a post that turned viral, Mayor Ron Huldai wrote, “In honor of Pride Week, we decided to challenge the government and allow couples to declare their union." Huldai added, "We hope the government will also enter the 21st century and uphold the rights of the LGBT community in law … the right to marry, have equal parental responsibilities, be protected from hate crime along with workplace bullying, and more."

According to Israeli law, marriages in Israel can be solemnized only by religious authorities. Thus, Jews can be wed only by a rabbi recognized by the Chief Rabbinate. Similarly, Muslims, Christians and Druze all marry through their own state-sanctioned religious legal systems. Civil marriages of interfaith and same-sex couples are technically not illegal, but there are no legal institutions authorized to carry them out.

Same-sex couples enjoy some state benefits, but not all. For instance, the Foreign Ministry has recognized already several years ago the right of a spouse, even if not married, to join his/her diplomat partner on a mission abroad. After proof of living together, the ministry would pay the travel costs of the gay spouse to join the diplomat partner, the same way it pays the flight tickets for married couples. On the other hand, male gay couples do not enjoy public health system financial support for fathering children. Newly appointed Welfare Minister Itzik Shmuli is now pushing forward legislation for the state to participate in costs of surrogacy processes outside of Israel.

The announcement of Huldai created much commotion, offering even further visibility to Pride events celebrated in Tel Aviv this week. With the recent spike of coronavirus cases in Israel, the Tel Aviv, Haifa, Jerusalem and Beersheba municipalities were obliged to postpone their traditional Pride parade until the end of the summer. Instead of the parade, the four municipalities decided to sponsor a whole week of Pride events. Some events will take place in the virtual space, others in the streets, but in open locations where large crowds could be avoided.

Static and Ben-El band, together with Israeli-Arab singer Nasreen Qadri, will post June 23 on Facebook a clip of the official Pride song, which will kick off all of this year’s events. On June 25, Tel Aviv would feature the "Drag in Tel Aviv" event series, with drag queens performing and dancing in public spots and on roof tops. On the same day, tourist guides will offer free tours of "Gay Jaffa," discovering the stories of mythological figures of the LGBTQ community, and meeting gay artists and musicians who perform in the city.

On June 28, the four municipalities will hold at the exact same time rallies under the title, "The revolution is not over yet." In a post published by the Beersheba Pride House, the group called on residents to join them at the rally. "Right after the rally, in front of the Beersheba municipal hall, we will continue together to a nearby pub, where we will watch together the Beersheba virtual Pride parade. … Representatives of the Community and Mayor Ruvik Danilovich will make speeches, followed by local artists and singers who will perform online."

Thousands of Israelis and tourists participate each year at Pride parades. A record number of 250,000 people participated in June 2019 at the parade held in Tel Aviv — the biggest event of its kind ever to take place in the Middle East. Over the years, the parades have become not only major tourist attractions, but also important socio-political stages. Several coalition and opposition Knesset members and ministers participated at the 2019 Tel Aviv parade, including Meretz Chairwoman Tamar Zandberg, Shelly Yachimovich of the Labor Party, Blue and White parliamentarians Idan Roll and Eitan Ginzburg, and Likud Minister Amir Ohana.

In 2019, Newsweek magazine rated the Tel Aviv Hilton Beach as No. 1 on its list of the 10 Best Gay Beaches in the World. "In mid-June, Tel Aviv Pride, the only sanctioned Pride parade in the Middle East, sees more than a hundred thousand revelers marching down to the beach for live music, dancing, drinks and more. Sponsored by the local government, the event is completely free of corporate sponsors and anyone can join the parade when the spirit strikes them," Newsweek wrote.

Despite the spike in the coronavirus, the Tel Aviv municipality is adamant to preserve its reputation. It is now hoping to get the parade back on track by the end of the summer, letting tourists know that virus or no virus, Tel Aviv continues to be "the city that never stops."