As Jerusalem prepares for its annual gay pride parade, members of the city’s LGBT community speak of the importance of raising the rainbow flag to call for rights and show that religion and homosexuality can coexist. 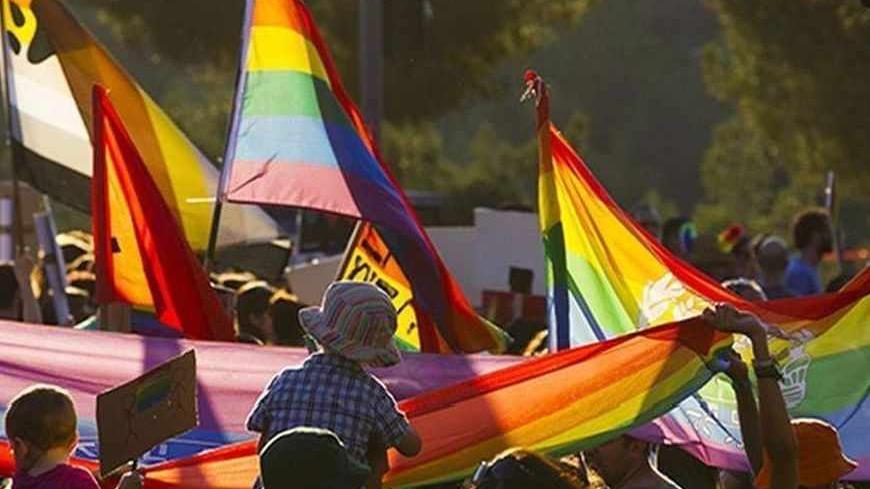 In a sparkling, beaded black dress and stilettos, 30-year-old "Gallina Port des Bras" bid welcome from the stage of "Mikveh" — the self-proclaimed "one and only lesbian, gay, bisexual, transgender (LGBT) and straight-friendly club in Jerusalem." Smacking her strawberry red lips and flipping her long blond wig, Port des Bras — whose offstage name is Gil Naveh — told Al-Monitor that though Jerusalem has bred the country’s most famous drag queens, the city is no easy place to be a drag queen, or for that matter gay.

“Jerusalem is one of the craziest cities in the world. It’s very religious but also very free. It’s the most beautiful city in the world, but has some of the ugliest sides of humanity in it,” he said. Raised in a very secular family and coming out at the age of 13, he said he was also raised in a bubble. Naveh — among the organizers of the Jerusalem Gay Pride Parade to take place on Aug. 1 — said he has never been attacked himself, but seen it happen to several of his friends. He explained that it is not so much the frequency of incidents of violence, but the constant awareness of the threat of violence.

During the Gay Pride Parade in 2005, an extremist from the ultra-Orthodox Haredi community stabbed and injured three people, arguing later during his police interrogation that he “came to murder on behalf of God. We can’t have such abomination in the country.” Naveh, who was standing only 20 to 30 meters away from the incident, said it was a major scare, but also a time when he felt that it was his responsibility as "hostess" to show people that the parade had to carry on.

“That is something a drag queen in Jerusalem does. Wherever there is strong homophobia, the drag queen comes and glitters it out,” Naveh said.

Israel often brands itself as the hub of tolerance for the LGBT community in a region where such labels are heavily stigmatized and often dangerous. But serious hate crimes are not uncommon. According to Alice Marcu, from the grassroots activist community center Jerusalem Open House for Pride and Tolerance — referred to as the "Open House" — there are no records of hate crimes against the LGBT community. In August 2009, a masked man walked into a LGBT youth center in Tel Aviv and started shooting, killing two and wounding dozens. Speaking to Al-Monitor at the Open House, Marcu said that the Tel Aviv attack cut especially deep, partly because of the city’s reputation of being more tolerant and because many of the youths had not come out to their family and friends. Some experienced their parents saying, "I would rather have a dead child than a gay child."

Still, Tel Aviv remains the unofficial "gay capital" of Israel, and its colorful, festive annual parade draws attention from all over the world. But in Jerusalem, the situation is something else. In the "Holy City," pressure from religious communities makes it difficult to be openly gay. But this only makes the Jerusalem Gay Pride Parade more important, Marcu said.

“People ask, 'Aren’t you doing it to spite the religious community? You should be respectful,'”Marcu said. “But that implies there is something wrong in being gay, that it’s against religion and spirituality,” she said, adding that when the verbal and physical violence surrounding the pride parade was at a peak in 2006, some critics would talk about gays as if they were not part of society.

“They said, ‘We will sit at the gate of the city and stop them with our bodies.’ And I thought, ‘What gates?’ We are inside and part of it — this is where I live, work and pay my taxes,” she said.

Marcu explained that due to the large conservative Jewish community, the parade brings forth a debate about how religion and homosexuality can be combined.  She describes herself as a secular Jew, though emphasizing that she sees herself as religious.

In the past, the pride parade has met massive resistance from the Jewish ultra-Orthodox community, which sees homosexuality as prohibited according to the Hebrew Bible.

Eli Kaplan-Wildman, from the social organization Havruta for observant gay men, said many are either forced or feel obliged to leave their religious community. Being from an Orthodox background himself, he is happy that his parents accepted it when he came out at the age of 15. Speaking to Al-Monitor at the Open House, where he has been going to groups for young people for more than a decade, Kaplan-Wildman said many Orthodox choose to abandon their religion when they come out because they do not feel they can practice their religion and be accepted.

Havruta’s aim is to provide space for both. It organizes social and religious activities and has a hotline where, Kaplan-Wildman explained, they deal with men who are part of very conservative religious communities and might never come out of the closet, gay men who are married to women and men who are living in open same-sex partnerships.

According to HaAgudah, the national grassroots organization to strengthen LGBT rights in Israel, Israel is one of the world’s most progressive countries in the world when it comes to equality for sexual minorities. Marcu said Israel, a signatory to the UN's Gay Rights Protection Resolution and one of the first countries to allow gays to serve in the army, is undoubtedly advanced.

Still, according to Israeli law, Israel’s Rabbinate has monopoly over marriage, and does not allow any civil marriage — let alone same-sex marriage. Though the state recognizes domestic partnership of same-sex couples, they do not hold full rights equal to those of married couples. This is reflected in social benefits and specifically in the inability to adopt or qualify for surrogacy.

While Marcu sees a growing tendency of courts deciding in favor of LGBT rights and a rise in support even among right-wing politicians, she said that there’s still a long way to go.