Israeli politicians participated in numbers at Friday's Gay Pride Parade in Tel Aviv, but words are not enough and hugs have to be transformed into deeds. 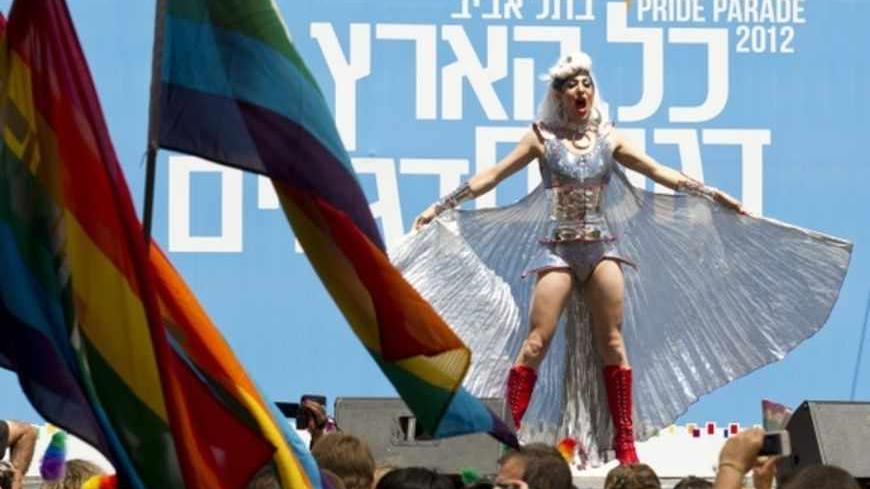 A drag queen singer in heavy makeup performs in front of tens of thousands of participants, during the opening of the annual Gay Pride parade in the Mediterranean city of Tel Aviv on June 8, 2012. - AFP PHOTO/JACK GUEZ

In 2009, when Justice Minister Tzipi Livni served as chairwoman of the Kadima party and as foreign minister, her campaign managers discovered that the candidate they were canvassing for was gaining traction in the gay community. They instantly realized that such an embrace meant votes in the ballot box.

This was a win-win situation for both sides. Livni was gaining active support from a powerful group with a strong presence in the media, thereby reinforcing her image as a champion of liberal values. The gay community, for its part, was gaining a highly prominent politician, the leader of the largest party in the country (back then Kadima had 29 Knesset seats out of 120) who was also vying for the premiership.

Livni heralded a new era in the relationships between Israeli politicians and the gay community. She managed to knock down the "leftist" barrier. Until that time, the community's representatives in the Knesset hailed from left-wing parties, chiefly Meretz. And suddenly, for the first time, they were enjoying the support of a leader from centrist politics, and one that comes from a "devout" right-wing ancestry to boot. In the political world of those years it was not uncommon to hear the chairman of the Orthodox Shas party, Eli Yishai, opine that "homosexuals and lesbians are sick people." Politicians from the right preferred to keep silent in the face of such vituperation so as not to "lose the Orthodox."

Tzipi Livni discovered the wonders of this powerful group, serving as its perfect ambassador.

Politicians — as is their way, as soon as they identify a new electoral power base — homed in on the target. And thus, since the elections of 2009, the gay community has been the object of courtship. And the gay community, which had been excluded from mainstream politics, surrendered at once. For the first time, the Likud party saw the establishment of its own "gay cell." In the last election campaign, politicians were seen at gay parties, meeting frequently with gay representatives and not forgetting to issue press releases immediately thereafter.

This phenomenon reached its zenith last Friday [June 7] in Tel Aviv, at the 15th annual gay pride parade, which was the largest ever (with an estimated participation of some 100,000 people). Having taken place in the wake of the solving of the murder case of youths at the "Bar No'ar" homosexual club in Tel Aviv (August 2009), the parade was teeming with politicians who wanted to speak to the public.

No less than four ministers addressed the rally, including the finance minister and chairman of Yesh Atid party, Yair Lapid; minister of health, Yael German, from the same party; Limor Livnat, the minister of sports from the Likud party; and, of course, minister of justice and chairwoman of HaTenua party, Tzipi Livni. Other speakers included chairwoman of the Labor party, Shelly Yachimovich, and chairwoman of Meretz party, Zehava Gal-On. (Incidentally, Gal-On, Yachimovich and Livni all attended pervious gay pride parades.)

Other Knesset Members that came to show their support were Nitzan Horowitz from Meretz, who is running for mayor in Tel Aviv and is one of the community's most senior members and a permanent fixture in these parades; Miri Regev from the Likud, and the young Knesset member from the Labor party, Stav Shaffir, who long before being elected to the Knesset, was actively involved in gay causes.

With so many politicians attending the rally and beautiful pictures posted on the newspapers' front pages the following day, one might think that Israel is a ground-breaking country in terms of legislation that provides equality for lesbians, homosexuals, bisexuals and transgender people.

The troubling news is that not only are we not breaking any new ground, but when it comes to the most elementary thing — same-sex marriage — we rank together with Russia, Iran and Saudi Arabia. In Israel, as of 2013, same-sex couples have no right to register as married couples, as a result of which they are not entitled to the same rights as married couples in terms of housing, health, education and child benefits.

Knesset Member Stav Shaffir, one of the protagonists of the social protest during the summer of 2011, submitted an appropriate draft bill that would allow same-sex couples to get official recognition under the civil union arrangement law espoused by the Yisrael Beiteinu party, which aims to help non-Jewish couples get married. The idea is quite simple: Let's open up the civil union law for same-sex couples. Shaffir signed up all her Labor faction members in support of this draft bill as well as Knesset Member Miri Regev from the Likud and Knesset Member David Tzur from Hatenua. Surprisingly, however, she was turned down by the Knesset members of Yesh Atid, and also those of Meretz.

The prevailing unofficial explanation at the Knesset is that the chairman of the party — Finance Minister Yair Lapid — wants to avoid getting grief from his good friend, chairman of HaBayit HaYehudi party and minister of Economy and Trade, Naftali Bennett. So Lapid is waiting to make his move until the state budget is passed.

Shaffir says that Yair Lapid of all people should have embraced her draft bill. After all, at his address at the gay Pride parade he said that he had come to talk about love. And, even though the audience jeered, he clarified, "No shouting will break my deep commitment to this community and its rights. I am yours.''

"That's hypocrisy," says Shaffir. "Words are all very nice. But love is earned by deeds first. You can't refuse to sign a draft bill that aims to bring equality to this community and then talk to them about love."

Shaffir is well aware now that the battle of the gay community vis-à-vis politicians should be concrete. The community can't make do with just an embrace, which is sometimes exploitative and nothing more than a PR stunt. This is why she suggests to the leaders of the community to choose very carefully which politicians they wish to associate with. For starters, they should demand of the 'gay circle' in Yesh Atid to take action so that her draft bill is carried. In other words: hugs for actions.

The distinction Shaffir makes is an important one. The gay community has gathered so much clout vis-à-vis the politicians in recent years, that it's time to shift gear. Hence, the first litmus test of the Knesset members has to be a commitment to a law that would legalize same-sex marriage. This can be Shaffir's draft bill or any other proposal in the same vein. It doesn't really matter. What is certain is that at the next parade, the politicians would have to come with something to show in order to get the gay embrace.

Yesh Atid said in response: "We're promoting a government bill of civil unions that would provide a comprehensive social response, including for the LGBT (Lesbian, Gay, Bisexual, Transgender) community, Psulei Hitun — those people that cannot be married according to Jewish law — as well as anyone who chooses to get married not through the rabbinical establishment. … We believe everyone has the right to choose the way they want to love. Stav Shaffir's draft bill provides a solution only for the LGBT community while excluding other populations."

Knesset Member Nitzan Horowitz explains that despite Shaffir's good intentions, ''It is wrong to separate amongst all those who are not allowed to marry [according to Jewish law], and the best solution is to legislate a law for civil marriage for all. Next month I intend to propose such a bill.'' Horowitz adds ironically, ''It is obvious that some of the Knesset members and ministers who attended the parade on Friday will disappear once the bill is brought up to the Knesset.''