Meretz Knesset member Nitzan Horowitz says the HaBayit HaYehudi Party, which was thought to be civic-minded and liberal, is obstructing legislation to prevent discrimination against gays time after time. 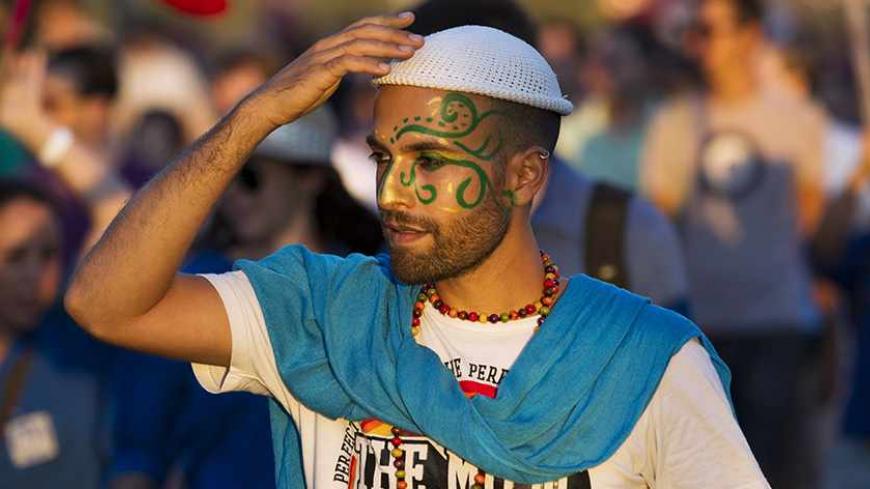 The loud argument recorded in the Knesset Dec. 4 between members Adi Koll of Yesh Atid and Ayelet Shaked of HaBayit HaYehudi focused media attention on the personal fight between the two and the analysis accompanying it, according to which the political alliance between the leaders of their parties, Yair Lapid and Naftali Bennett, is closer than ever to its end. But beyond the political question, the topic of the fight has unfortunately been pushed aside, in what is yet more proof of the dream of the new politics, which promised to abandon the old political wheeling and dealing and work for social justice, being deferred.

The Lapid-Bennett coalition had an excellent opportunity to pass a bill introduced by Koll, in the spirit of the values of universal equality, which seeks to grant same-sex couples with children tax benefits equal to those of straight parents. Ostensibly, this isn’t a dramatic piece of legislation that changes the way of the world, but merely a cosmetic change to existing income tax laws that is meant to correct a gross injustice. For a moment it looked like HaBayit HaYehudi intends to be a part of this necessary correction, since it doesn’t contradict the right-wing ideological worldview of the party, and doesn’t impact the values of Jewish law.

But HaBayit HaYehudi changed course at the last moment. Shaked was sent to torpedo the bill and bury it along with the party’s election promise of a younger and fresher approach and of an enlightened, equal and civic-minded worldview. It turns out that contrary to the party’s election slogan, nothing new can start when Minister of Housing Uri Ariel, known for his homophobic stance, succeeds in forcing his views on Bennett and Shaked. They were so convincing in their electoral campaign that even avowed secularists with center and left-leaning views were enticed to compromise their diplomatic positions and vote for them.

And if there was a moment that revealed this misrepresentation and showed the true face of HaBayit Hayehudi, it seems it was Knesset member Koll’s outburst, when she found out that her bill was blocked.

The decision of Bennett’s party bodes ill for the gay rights legislation initiatives that have inundated the Knesset in recent weeks. New bills meant to eliminate discrimination against the gay public in almost every realm of life are popping up from every direction, but they fail one after the other. Justice Minister Tzipi Livni and Yesh Atid chair/Finance Minister Yair Lapid cannot succeed in overcoming the political strength of HaBayit HaYehudi, despite substantial support from other members of the coalition. Prime Minister Benjamin Netanyahu is uninvolved and isn’t helping either side.

“Talk is cheap,” said Knesset member Nitzan Horowitz of the Meretz Party. The only openly gay Knesset member, who has been trying to advance gay rights legislation since he was elected in 2009, was filled with optimism after the last elections for the Knesset at the beginning of the year. With so much young spirit in the assembly, and with the promise of coalition factions to cast off the conventions of the old politics, it seemed possible to him to advance enlightened civic legislation.

Horowitz joined forces with Yesh Atid's Ofer Shelah to establish the gay lobby in the Knesset, a group that quickly became one of the most popular in the legislature. Politicians from almost every party have discovered the electoral power of the gay public in recent years, and are competing for the privilege of standing on the stages of the most prominent gay pride parades. All the large parties have groups of supporters from the LGBT community, including the Likud, which is considered to have an affinity to Jewish tradition. Even President Shimon Peres is considered a friend of the gay community, and on Dec. 1, he was quoted as saying that everyone has a right to raise a family.

So what goes wrong when it comes to legislation at the Knesset, I asked Horowitz a mere hour after the Ministerial Committee for Legislation shot down two bills. One, introduced by him and Shelah, dealt with prohibiting discrimination on the grounds of sexual orientation; a second, introduced by Knesset member Dov Khenin, was intended to grant same-sex couples the same benefits in buying a home that heterosexual couples receive.

“It says that on the one hand, there’s great public awareness about this issue, and there’s public support and a strong willingness to correct it, but the political establishment isn’t ready for it,” explained Horowitz. “On the one hand, there’s extensive support for it in the political system, but it’s not considered a very important issue. I assume that if the prime minister wanted these laws to be passed, they would pass, but apparently it’s not important enough for him and not for the Likud.”

But it’s never been the main issue for Netanyahu or the Likud. The burden of proof was on Lapid and Livni, who became the darling of the gay community in 2009.

“It’s not necessarily Lapid; it’s more the minister of justice, because she’s also chairwoman of the Ministerial Committee for Legislation. Her predecessor in that role, Yaakov Neeman, was the worst enemy of the community. Seemingly, the coalition has significant political power [on the side of gay rights] — HaTenua, and Yesh Atid, and some of the Likud — but as you see, it doesn’t pass because it’s not really important for the coalition. It all starts with the mistake Lapid made in the coalition agreement, in that he gave Bennett veto power on matters of religion and state. I warned and yelled about it, because in Israel, everything can be included in ‘religion and state.’ And here there’s an absurd situation where HaBayit HaYehudi, with only 12 seats, sets the tone. They’re holding us hostage.''

Did you believe Bennett when he presented himself as open-minded?

“There was this atmosphere, as if something new is starting, more open and tolerant — but it only seemed that way. When it comes to the test of legislation, it turns out nothing new is starting. What are we talking about, after all? Making the conditions for home loans equal? It’s so basic. They just can’t hear the word ‘gay.’ They go crazy and defeat these bills time after time.”

And what about all the politicians who court the gay vote in the election? Don’t you settle your score with them?

“All those who march in gay pride parades — afterward, we need to check if they went to the prime minister and put the right pressure on him, or whether they gave the impression that it’s not really important, because in the end this is what happens. What happened last week in the assembly with Adi Koll’s bill was truly a disgrace. It’s not a good situation, because I feel that Israeli society is ripe for these changes. There’s no problem with two dads. It’s very accepted. Last week I was even at a rally in Bet Shemesh, and I felt there was openness there as well.”

Maybe you should adopt the model of the [settlement umbrella organization] Yesha Council, and publicize the voting records of all those who court you in the elections and then disappear.

“In this context, I have some criticism of certain elements in our community, who don’t do the political calculus and melt at the smile of any politician at the pride parade, who afterward does disappear. There needs to be reward and punishment for politicians. They should just be punished, to teach them in a painful way that we’re not at the bottom of the food chain.

“There’s serious damage here. Maybe we really should learn from the settlers and punish politicians.”