A girls’ ensemble in East Jerusalem uses both traditional and Western musical instruments to perform traditional songs of Palestine. 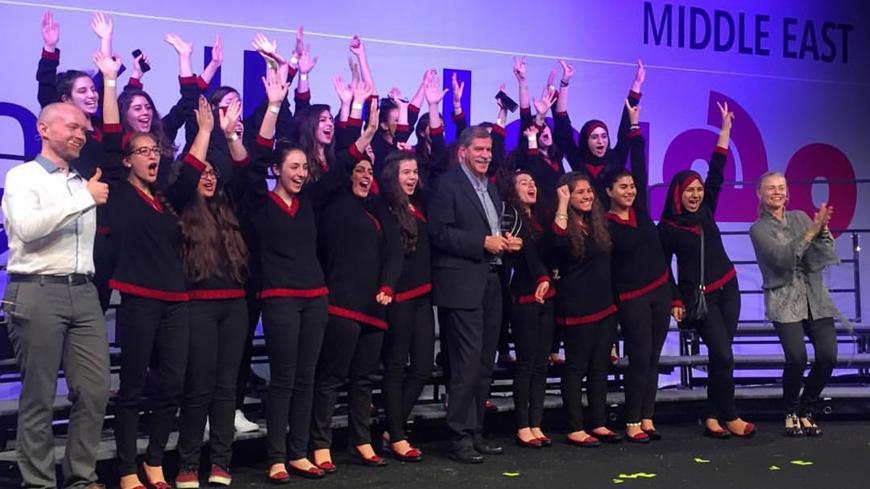 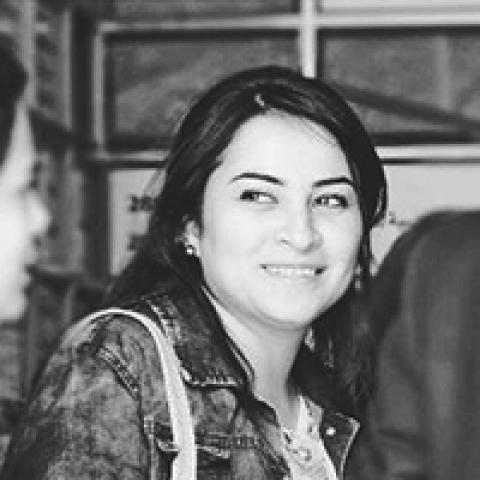 Banat al-Quds, which means “Girls of Jerusalem,” is a Jerusalem-based ensemble of young Palestinian female singers and performers. The group was founded in 2014 and now consists of 25 girls, ages 14 to 20. They meet every week at the Edward Said National Conservatory of Music in East Jerusalem for rehearsals. The choir sings Palestinian national songs about the Palestinian cause.

The Edward Said Conservatory’s branch in Jerusalem, which was established in 1993, was the launchpad for the group’s live performances. The conservatory holds musical workshops to introduce artists, who are usually from schools in marginalized areas and Palestinian refugee camps, to new musical instruments and help form chorus and percussion ensembles. The majority of Banat al-Quds members attended these workshops.

“I joined the ensemble six years ago, as I participated in the violin audition during a workshop at my school. I was chosen among a good number of other girls who auditioned,” Reem Sherif, 20, a violinist in the ensemble told Al-Monitor.

“For me, playing the violin is a way of showing that there are plenty of talented girls in Palestine who voice their cause and demands through art and music,” Sherif said.

Nawras Maghribi, 18, a singer in the ensemble, told Al-Monitor, “I have been passionate about music ever since I was a kid. The conservatory offered me the chance to practice this passion. I feel very proud when we perform in Palestinian, Arab and international festivals, where we can send a heartfelt message to the world about the Palestinian cause. Also, with our performances we challenge the stereotype about gender roles and the culture of shame regarding girls who sing, dance, draw or perform any other art.”

Banat al-Quds won the best regional choir award in the Middle East in the 2016 Dubai Choir Festival. It has also performed at several festivals, such as the Annual Jerusalem Festival of Light in the Old City.

Mohamed al-Awar, the director of the Jerusalem branch of the conservatory, told Al-Monitor, “Banat al-Quds ensemble gives a chance to all its members, be it singers or instrumentalists, to be in the spotlight, unlike other bands that focus on the lead singer during performances. The group also sends a powerful message that Palestinian women can do anything. They can participate in music, love and struggle. They are part of the Palestinian culture. They convey a bright image of Palestinian women.”

Awar said that it remains difficult for new members to come on board due to security reasons, the military checkpoints and the separation wall surrounding the city, which prevents the band from making their name known in the West Bank and the remaining occupied Palestinian territories.

“The conservatory takes a major risk every time we pass through checkpoints, where the girls are thoroughly searched. Therefore, we only perform one or two shows in the West Bank a year.”

Awar, however, noted that the conservatory is searching for ways to have new members in the group from Ramallah, Bethlehem and the Gaza Strip. He expressed his disappointment that the Jerusalem branch has been unable to attract music instructors from outside Jerusalem, mainly due to the Israeli restrictions in Jerusalem, including the military checkpoints.