A recent festival organized by the Edward Said National Conservatory of Music brought Gazans a sense of normalcy through traditional and modern music and comedy. 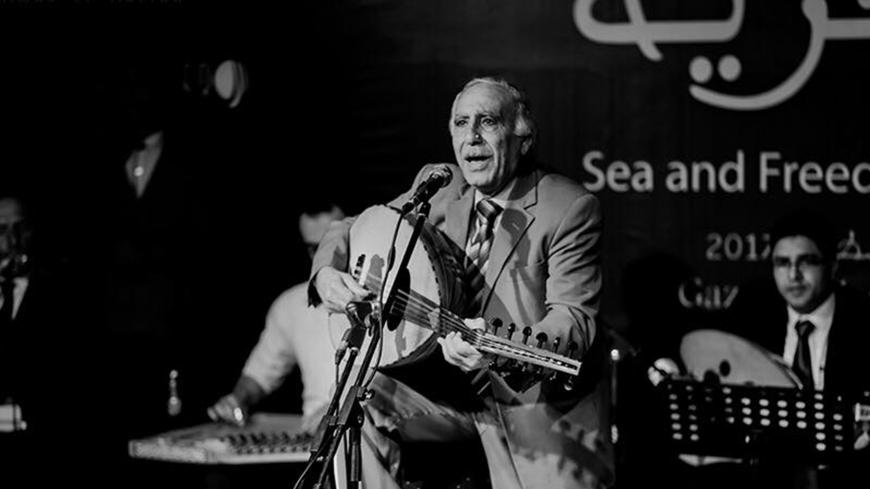 GAZA CITY, Gaza Strip — This year's Sea and Freedom Festival, an annual gathering organized by the Edward Said National Conservatory of Music since 2015, gave Gazan artists the opportunity to perform traditional music of the region for a large audience.

“The main goal of the festival was to give artists in Gaza the chance to show off their work to the Palestinian public, which is keen to hear music,” Ismail Daoud, a well-known Palestinian musician and professor at the conservatory, told Al-Monitor. “The Edward Said Conservatory is the only institution organizing regular music festivals in the Gaza Strip.”

“The five singers were accompanied by the Gaza Orchestra, which I conduct,” Daoud said. “Before I started directing at the conservatory, I taught oud and Arabic music theory there.”

Tickets were sold for just 10 Israeli shekels ($2.80), rising to 20 shekels ($5.70) for the third day of the festival, which featured a performance from Watar Band, a soft rock pop group that is known internationally.

Entrance on the second and fourth days of the festival were free of charge. The second day featured art by Mohammad Daghmash, a show by magician Baha Ghaban and stand-up comedy by Ibrahim al-Najjar, interspersed by musical performances from students at the conservatory and by the band Awtar Sharqiya and the Gaza Orchestra.

The festival takes its name from the sea, as this is considered a symbol of freedom for residents of the besieged territory, and is supported by the Norwegian Consulate to the Palestinian Authority as well as by the Bank of Palestine, which is also a partner of the conservatory, and by Mashareq, a marketing firm.

Daoud, 68, performed the song “Ya ayni ala sabr” on the first day of the festival. “My old musician colleagues in Gaza and I received invitations from the Edward Said Conservatory to take part in the Sea and Freedom Festival to honor our efforts to produce and teach music in Gaza,” he said. “I happily agreed, as it was a rare opportunity to perform for the public in Gaza, who really need good music experiences to help them forget their woes caused by the bad political situation in the Gaza Strip.”

He added, “On the first day of the festival, I noticed that there was a real hunger for music. The performance hall was full and the organizers had to bring about 100 extra chairs. It made me really happy.”

Throughout his career, Daoud has written around 270 songs and has produced a book of his compositions. “I was one of the first people to bring music theory, performance and singing to Gaza,” he said. “During the first intifada, we faced pressure from Islamist groups that said music is haram [religiously forbidden]. But this festival — with this name — shows that we singers and composers — over 50 of us — have succeeded in supporting music here.”

Watar Band's Anas Najjar, who performed on the second and fourth days of the festival, said, “Watar Band was formed in 2008 by a group of young guys who hadn’t studied music, but they were enthusiastic. We were later taught by professional music teachers from Gaza. We have made several albums including 'Close to Here,' which includes lots of songs young people like as well as common traditional ones. One of our top songs was 'Wayn ‘a Ramallah,' which is a traditional song we did a remake of.”

Najjar also led the Gaza Orchestra on the last day of the festival. “The festival gave us a good space to meet the public. It is not a chance you get very often in Gaza because there aren't many music festivals.”

Comedian Nabil Diyab’s performances went down well, with comparisons of cartoons from the present and the past, descriptions of his unique relationship with his mother and of how Bollywood films go beyond logic. The crowd’s laughter made him want to carry on. “The interaction I saw during the two performances inspired me to talk about subjects relating to Gaza and gave me a real positive energy to continue,” he said.

“I had worried that I wouldn't be able to make everyone in the theater laugh because they came from different backgrounds. There were children, women, young people and the elderly, and I had to choose subjects that worked for everyone. The fact that they laughed — especially the children — showed me I was going in the right direction.”

Diyab said the festival was trying to overcome the difficult lives faced by people in Gaza because of the blockade and closed borders as well as high levels of unemployment. “Its selection of art, music, song and folklore was not something you would expect to see in Gaza that is socially conservative and religiously observant for the most part,” he concluded.