Japanese grand piano, gifted to Arafat in 1997, plays on in Gaza

The Yamaha grand piano that Japan gave to the late Palestinian leader Yasser Arafat in 1997 returns to make music again after being exposed to three devastating wars. 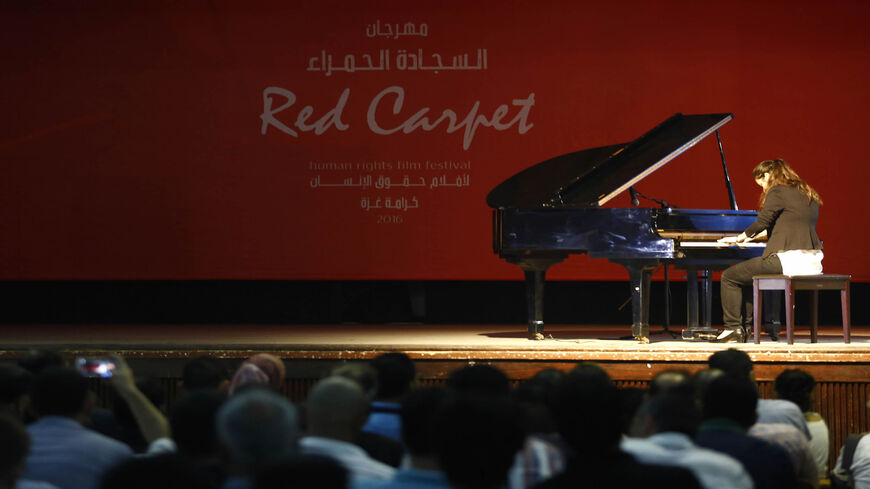 A woman plays the piano on stage during the opening of the "Red Carpet" cinema festival in Gaza City, Gaza Strip, May 12, 2016. - Mohammed Abed/AFP via Getty Images

In 1997, the Japanese government offered a grand piano, a product of the Japanese company Yamaha, as a gift to late Palestinian President Yasser Arafat, in addition to other musical instruments, such as a cello, violin, clarinet, saxophone, and other aerophone and percussion instruments to entrench Palestinians’ cultural values, including music, three years after the establishment of the Palestinian National Authority in 1994.

Yamaha is one of the largest musical instruments’ manufacturing companies in the world, and its products are distinguished by tradition and luxury. It is based in the Japanese city of Hamamatsu.

Due to its large size and cultural symbolism, the grand piano was placed in the Roman theater inside al-Nawras resort in the northern Gaza Strip in 1997. The piano survived the bombing of the Roman theater in three devastating Israeli military operations in 2008, 2012 and 2014.

The Belgian Music Fund mission headed by Lukas Pairon, which is specialized in maintaining musical instruments, has maintained the grand piano several times. Yamaha conducted maintenance on the piano in 2018.

After the destructive Israeli military operations ended and the grand piano was seriously damaged as a result, the Palestinian Ministry of Culture found it necessary to move the piano to a safe place. It was thus transferred to the Edward Said National Conservatory of Music in 2018 under an agreement between the Palestinian Ministry of Culture and the conservatory. After repairs, the piano was once again returned to playing condition.

Al-Monitor’s team went to check on the grand piano and found it inside a safe room far from the main street of the Edward Said National Conservatory of Music in the center of Gaza City. The institute is located inside the Palestinian Red Crescent building, near an elementary school run by the UN refugee agency for Palestine refugees, UNRWA. This strategic location makes it difficult to target the place through military operations, as international conventions and treaties forbid the bombing of health facilities, such as the Palestinian Red Crescent.

Atef Asqoul, director of the Creative and Arts Department at the Palestinian Ministry of Culture, told Al-Monitor, “The Palestinian Ministry of Culture pays great attention to the grand piano because of its symbolism as a precious gift from Japan and its role in learning to play music. It was moved from one place to another to shield it from the traces of war. Previously, the Roman theater in al-Nawras resort housed it, and it miraculously survived the bombing of the resort at the beginning of the 2014 war. The Gaza Strip lacks spacious halls, theaters and music institutes, so it was placed in the Edward Said National Conservatory of Music to allow the institute to spread musical culture and train musical cadres to master the piano.

Asqoul explained that one of the reasons that prompted the Palestinian Ministry of Culture to place the grand piano at the conservatory is its musical identity and safe environment. In addition, it is unlikely to be targeted in military operations. He noted that the agreement between the Ministry of Culture and the conservatory allowed all musical institutions to use the piano or learn on it, as it is not an individual’s property but rather it belongs to the entire Palestinian people.

Ismail Daoud, who holds a doctorate in musicology, stressed the importance of music for the individual and society, as it is the language of human emotion. He highlighted its role in refining, treating and elevating the soul.

He told Al-Monitor, “If you want to learn about the cultural identity of a people, you should look at their art. There are several factors that led to the stagnation of the development of the art of music in the Gaza Strip, mainly the lack of security, recurring wars and multiple humanitarian crises that affected all aspects of life.”

He explained that these causes can be addressed through security, jobs and financial stability that would make the art of music a priority for the general public, as it is one of the basic needs that touch the spiritual side of the human being.

Daoud noted, “The grand piano is the largest piano in Gaza. The bigger the piano, the sweeter, the more beautiful and louder its sound. The grand piano is a symbol of music. It portrays refinement, strength and greatness. When the Japanese government gave the Palestinian people this piano, they were in a state of civilizational and cultural prosperity, and it marked the beginning of the Palestinian Authority mandate.”

When asked about the musical institutes in the Gaza Strip, Daoud said that the institutes are limited to the Edward Said National Conservatory of Music, Palestinian Center for Music, Sayed Darwish Institute and Sununu Establishment.

Ibrahim al-Najjar, director of the Palestinian Center for Music, was present when the grand piano arrived in 1997. He told Al-Monitor that the grand piano is considered the most beautiful piano in Gaza, despite the presence of pianos bearing other brands as well.

Julia Abu Namous, music coach at the Edward Said Conservatory since 2016, told Al-Monitor, “The grand piano is one of the most important pillars of the institute and its most prominent feature. Students from the Gaza Strip who receive piano training showed great enthusiasm to play the grand piano because it is different from other pianos available in Gaza due to its luxury and quality, and the melodies’ exits differ from the exits of other traditional pianos."

She noted, "When they start playing, they imitate Tchaikovsky, Mozart, Bach, Yanni and other great international musicians who played the piano,” emphasizing the need to pay attention to music, especially the piano.