Gaza's Only Music School May Close

Asmaa al-Ghoul tells the story of Gaza's only music school, which may have to close as it faces increasing financial pressures. 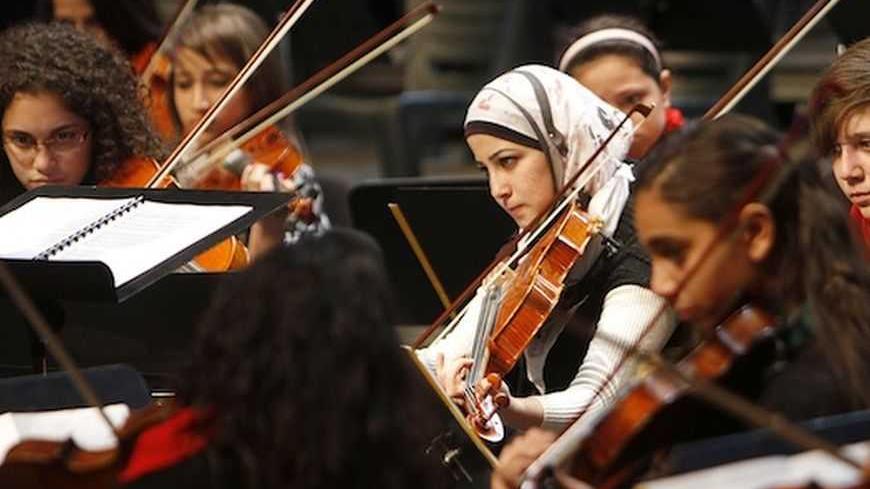 Members of the Jerusalem Orchestra — founded by Edward Said National Conservatory of Music to provide its Palestinian students with the experience of playing in an orchestra early in their musical education — play a concert in the West Bank city of Ramallah, Jan. 22, 2012. - REUTERS/Mohamad Torokman

During rehearsals in a music school in Gaza, Firas al-Sharafi, age 10, and his friend Abdel Aziz Abu Sharkh, age 11, were playing a song by Lebanese singer Fairuz. The two boys were playing the dulcimer, reading musical notes and occasionally glancing at each other with a smile on their faces.

They dream of joining a big musical group that plays both Eastern and Western musical instruments. Their dream moved closer to reality when they enrolled in the only music school in Gaza five years ago. They go to the school three times a week, and they have mastered the art of reading music and playing both the dulcimer and percussion instruments.

Firas and Abdel Aziz know that their school faces a major challenge this year: financial problems have left the school on the brink of closure. The school had been free to attend, but students now have to pay roughly $600 a year.

“Closing the school would truly sadden us," Abdel Aziz told Al-Monitor. "What will we do if it closes? Where will we go to learn music? We will continue to send endless emails to people to help our school. I will also make a film about the school to give people an incentive to donate.”

“Yes, we could also sell juice to pay tuition for all of the students," his friend Firas added. "We will not accept that the school be closed. There is no way we are going to let it close.”

The music school has faced a series of crises since it was established. It was bombed and destroyed during the war in Jan. 2009, when Israeli fighter jets targeted the Red Crescent Theater — the school’s headquarters at the time.

Ibrahim Najjar, the school’s principal, keeps the remnants of destroyed musical instruments, including a guitar, a piano and a lute.

“The school was hit only three months after its opening," he says. "Everything was destroyed, all the instruments. I remember that students sat down on the rubble with their instruments and began to play sad music, grieving for their school. Afterwards, we moved the school to our current headquarters and launched a donation campaign. The Music Foundation sent us many instruments — which were old, but in good condition — through the crossing with Egypt, because Israel had prevented the passage of musical instruments through the Erez checkpoint."

The school's difficulties did not end there. It has been a charity project for five years, affiliated with the A.M. Qattan Foundation. In April 2012, the Edward Said National Conservatory took over the school as it began to enter a state of crisis. The conservatory charged fees for learning music.

“In the beginning, we charged registration fees of $28," Najjar says. "Many students did not pay the tuition, and many others stopped attending school, believing that if they did not pay they couldn’t come back. We called them and urged them to return. These kids are very talented and learning music has changed their lives.”

Mahmoud Kahil is now 11 years old. When the school was first established, he was just seven, and he won first place in the oriental musical instruments category at a national music competition, periodically organized by the Edward Said National Conservatory.

Mahmoud still attends the music school, but he arrives late to his classes because he also attends a regular school at night. As soon as he finishes his regular classes, he hails a taxi and rushes to join his classmates Firas and Abdel Aziz in the dulcimer class.

Mahmoud was shy when Al-Monitor approached him to talk. Nevertheless, when he started playing the dulcimer, all the shyness disappeared, replaced with a perfect musical performance. But Mahmoud may have to stop attending music classes, as he has six siblings and his parents cannot afford to pay the tuition fees.

His father, Imad Kahil, told Al-Monitor, “I appreciate my son’s talent and I am grateful to the school, which was the reason he has come all this way in music. However, I think it would be difficult for me to pay this annual fee, as my other son will go to university next year.”

He added that “after he won the contest, I bought him a dulcimer, but there is nothing more I can do, in spite of my love to music. I will nurture his talent at home as I also play music. We are a family that loves music, even though it is not taken seriously by society.”

Imposing tuition fees at the music school’s Gaza branch, with its 180 students, is the only way to prevent the school's closure in the wake of diminished outside funding, Najjar says. He added that expenses include the salaries of the school’s 16 teachers, as well as the costs of rent, electricity, water and the maintenance of the students’ music instruments.

If more fees are imposed, Maria and her sister Maram al-Ashkar will also stop going to the school. In the best-case scenario, the younger sister Mariam, age 8, would stop attending violin classes so that her elder sister Maria, 12, can pursue her studies. Their mother Mayssa, 39, says the parents cannot afford to pay the fees for both. Maria will continue to play the violin and occasionally borrow it from the school to perform in front of neighbors, but Maran will never hold it again.

Najjar commented on the young girls’ story. He said that everybody had high hopes that they will continue learning music and that the school will one day become an institute for children up to the age of 16. He also expressed hope that audio library would be established, depending on the grants.

But not all donors are willing to contribute financially to Gaza, for many reasons. The most important of these reasons is Gaza’s political reputation, Mohammed al-Awar, head of the donation and grant department in the Edward Said Conservatory, told Al-Monitor.

He added that the school used to be affiliated with the A.M. Qattan Foundation, a charitable foundation. The foundation used to collect grants, and sometimes the Qattan family would cover additional expenses when the school fell short of donations. However, the foundation is a non-profit institute and relies on external support. As a result, if the grants stop from abroad, imposing fees become necessary.

He also stressed that the very last option would be to close the school. This year would be the school’s 20th anniversary. The Edward Said National Conservatory was established in 1993, with branches opening in Jerusalem in 1996, Bethlehem in 1997, Nablus in 2010 and finally in the Gaza Strip in 2012.

There all approximately 1,000 students among all branches, 60 percent of whom are studying through grants. Awar added that they are trying to obtain other sources of funding by appealing to supporting institutions and Arab banks and funds. But Gaza’s problem persists, as long as donors remain reluctant to support a music school there.