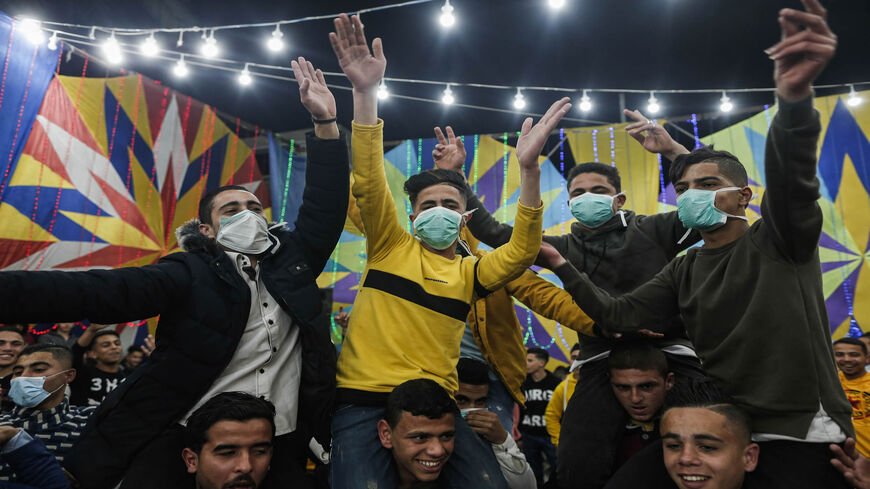 Palestinian men, some wearing face masks, dance at a wedding a day before authorities impose a ban on festive events as a protective measure against the coronavirus pandemic, Rafah, Gaza Strip, March 21, 2020. - Mahmud Hams/AFP via Getty Image

GAZA CITY, Gaza Strip — The Gaza Strip has been witnessing an uptick in artistic activities after a stagnation that lasted for years, mainly due to the Palestinian division and Hamas’ control of the coastal enclave. The Islamic movement espouses a fundamentalist ideology, which prompted many in Gaza to halt their artistic activities, such as musical evenings, in order not to raise debate or face any problems with the authorities.

Gazans have been flocking to hotels, resorts and cafes that opened their doors to vacationers and included among their summer programs' evening art events.

Al-Monitor attended a musical event and a graduation party for students of the University of Palestine at Al-Deira Hotel, where young attendees and invitees were enjoying themselves dancing and singing — a great distraction for Gazans to get their mind off their daily hardships.

Raouf al-Belbeisi, 26, holds a degree in multimedia. But he chose to embark on a different journey — a career in music. He is gifted with a beautiful voice and has worked to refine his talent. He also learned to play the piano, guitar and oud.

“I discovered my talent for singing at the age of 10 and began to work on my skills while I was in school. I learned online how to read musical notes. I also sang at events at hotels and resorts. I can say now that I have my own fans who encourage and support me,” Belbeisi told Al-Monitor.

“When I turned 19, I began to sing at events, but it wasn’t an easy journey. I faced many challenges, most importantly the fact that our society takes a dim view of artists and singers. This is not to mention the [Israeli] siege and the difficulty to get musical instruments, with almost complete absence of sponsors. This is why I worked hard to improve myself and make my way to stardom,” he said.

Belbeisi added, “I was accepted in several famous Arab singing competitions, such as "Arab Idol" and "The Voice," in 2014, 2015, 2016 and 2019. But I never made it to the auditions because of the blockade and the closure of crossings, which prevented me from making my dreams come true.”

Belbeisi was scheduled to participate in a festival at the Hakawati Theater in East Jerusalem, but was unable to do so because of the Israeli restrictions on travel to the city.

He is currently performing at Al-Deira and Roots hotels at weddings and birthday parties, and is hoping to one day go on tour abroad.

Hosam al-Falouji, 29, another singer from Gaza, told Al-Monitor, “At the beginning I was shy and I had stage fright. But when I obtained my high school diploma, everyone started encouraging and praising my voice. So I carried on with my university studies and obtained a bachelor's degree in business administration, but I also worked on improving my singing skills.”

Falouji said he faced many challenges, namely the culture in Gaza where music and singing are not viewed positively.

“But things have changed and I am now able to make my voice and my songs heard to many people through social media, where I met several musicians, singers, songwriters and composers,” Falouji noted.

He added, “Singers in Gaza have a beautiful spirit and a message they want to convey to the world through their music. My band is called Badil and we performed at the Palestine International Festival for Music and Dance, and I participated in the Sea and Freedom Festival in the Gaza Strip."

She said that the prevailing customs and culture of the Gazan society does not welcome local female singers. “They [women] come to us to create songs with their own voices. But they refuse to publicly disclose their identities fearing the society's judgment. Dealing with male singers, on the other hand, is much more simple.”

Owners of hotels and tourist resorts have come to see artistic evenings as a lifeline amid the economic stagnation that has been afflicting the Gaza Strip for 15 years.

Alaa Abdo, owner of Heavens restaurant and cafe on Rashid Street in Gaza City, told Al-Monitor, “I opened my restaurant in 2019. But the coronavirus pandemic forced me to close it for a whole year. This is not to mention the round of escalation that Gaza witnessed three months ago, and the siege that caused the prices of everything related to restaurants to balloon. All these factors were like nails hammered into the coffin of the restaurant.”

He noted, however, that the current summer season has somehow resuscitated the Gaza Strip. “We hosted artistic events for young singers, which boosted the number of our clients. The brilliant performance of young singers was very good for business. We are proud of the events and artists that have gained a wide popularity among clients.”

Abdo said, “Belbeisi, Faluji, Mohammad al-Barawi and Tariq al-Buhaisi give their best performances at weekly events at our restaurant. Each singer has his own fan base.”

He praised the cooperation shown by the Ministry of Tourism regarding musical events and concerts, hoping art in Gaza would flourish.

The owner of the Grand Palace Hotel in Gaza City, Moataz Nassar, told Al-Monitor that his hotel, which was established 21 years ago, includes wedding halls, conference rooms, workshops, a coffee shop and a restaurant. “The hotel has been affected by the siege and the coronavirus pandemic. For years now, we have only been hosting a few wedding celebrations. But recently, we have been hosting more artistic and musical events that bring good profit.”