Many talented female singers gave up on their dream of professional singing because of the conservative society in Gaza and Hamas’ clampdown on female performers, whom they deem indecent. 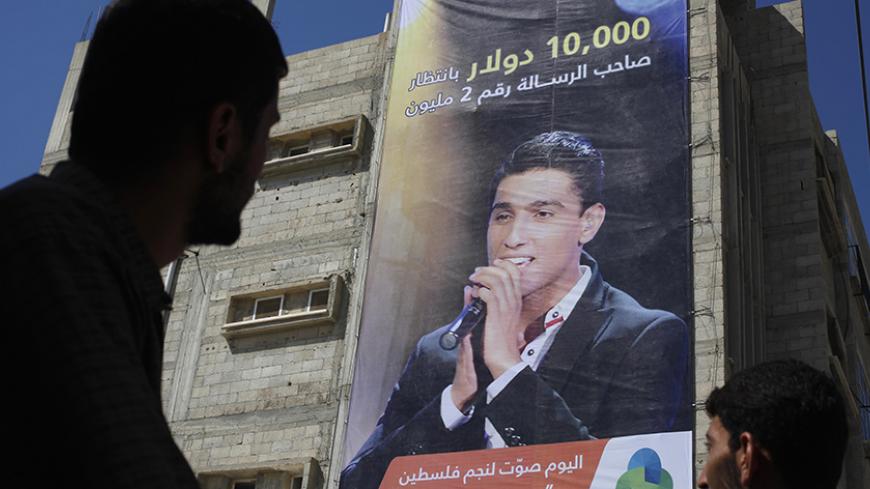 BEIT HANOUN, Gaza Strip — Khouloud Alian wished she had been gifted with a talent such as drawing or writing — a talent that did not require her to be in direct contact with the public, such as singing.

As a singer, Alian feels that society has been unfair to her, in addition to the clampdown by the previous Hamas government on female singers and performers, which has prevented many from fulfilling their dreams.

Alian is a 24-year-old singer living in the Beit Hanoun area in the northern Gaza Strip, which is seen as the most conservative region in Gaza.

Alian told Al-Monitor that she could not take any singing or vocal lessons or become a professional singer, given the conservative traditions of Gaza society.

“I'm majoring in health management, and I previously majored in information technology. I'm now working as a field researcher,” she said.

Alian also discussed when she first started to sing with the school’s radio station and took part in singing contests organized by the Ministry of Education. As a child, she also attended musical institutes.

“I joined an institute affiliated with the Ministry of Culture in Gaza. This was seven years ago. I stayed there for four years before the institution closed its doors by a decision from the Hamas government in Gaza,” she said.

The social crackdowns began when Alian was still a teenager. She said, “As I was growing into adulthood, my relatives and neighbors advised me to let go of singing as I was no longer a child. But singing was something I was fond of and loved to continue doing. Yet my parents and my husband were not against it."

Two years ago, Alian took part in a local talent contest and made it to the final round. However, the Hamas-affiliated security services at the time stormed in and prevented the young girls from performing at the contest.

Egyptian Sheikh Yusuf al-Qaradawi issued a fatwa in 2006 against young Palestinian singer Mays Shalash while she was performing in Morocco, describing her voice as “indecent.” The fatwa later on was imposed on all female singers in Gaza, according to Alian.

In late 2013, Hamas’ repeated restrictions in Gaza had prompted Alian to decide not to be part of any artistic activities or events, so as to avoid any embarrassment or obstacles brought on by society or the previous government.

Nevertheless, despite the harsh reality faced by female singers in the Gaza Strip, some tried to challenge the conditions as much as they could. Hiba Abdul Fattah, a 25-year-old artist, was one of the few performers in Gaza to carry on with her singing career.

Abdul Fattah told Al-Monitor that at the beginning, she had not spoken to anyone about her talent. In college, she chose to major in something she thought was the closest to music and art, so she went for a degree in journalism and media.

“I first started to record lyrical commercials for one of the advertising companies in the Gaza Strip. Shortly afterward in 2005, the Palestinian national television asked me to join its musical band, and I used to sneak out of the house to go to the rehearsals,” she said.

Immediately following the internal division and the shutting down of the national television station in Gaza on June 14, 2007, she stopped working with the band. She was asked to sing at Fatah’s inauguration ceremony, but at first she declined since she thought it would not have been appropriate for a woman's first public performance to be for Fatah. However, later on she changed her mind and accepted, out of courtesy, she said.

“After recording the song, which became a [national] hit, I played at an engagement party in our family and was surprised that everyone liked it, although they did not know it was my voice. However, I told them later on that it was my song. A year after recording the song in February 2012, I was encouraged to let the people know who I was by producing my first national video. My brothers have been very supportive of me, as they believed I was truly talented, not to mention the song’s big success,” she said.

Abdul Fattah took part in the Arab “X-Factor” show, which was broadcast on MBC in January 2015. She got through to the second round, but could not make it to the interview required to go to the next round, which was to be held in Jordan or Egypt, due to the closure of crossings and the blockade on Gaza. And thus, she had to quit.

Ibrahim Najjar, director of the Edward Said National Conservatory of Music in Gaza, said that the institute receives young talented boys and girls, but he has never seen a girl who continued singing later on.

“Unfortunately, most girls I had trained stopped singing when they went to college, given our conservative traditions in Gaza that deem it indecent for young women to sing. I know a girl who outshone her famous male peers, but she dropped singing completely after her marriage, locking the door on her talent,” he told Al-Monitor.

Najjar stressed that singing has always been a national and educational activity in the framework of customs and traditions, as it is a beautiful talent. He encourages this divine talent, especially among girls who are gifted with beautiful voices.