The Zar ritual has seen better days, but an Egyptian band has taken upon itself the mission of keeping this ritual alive. 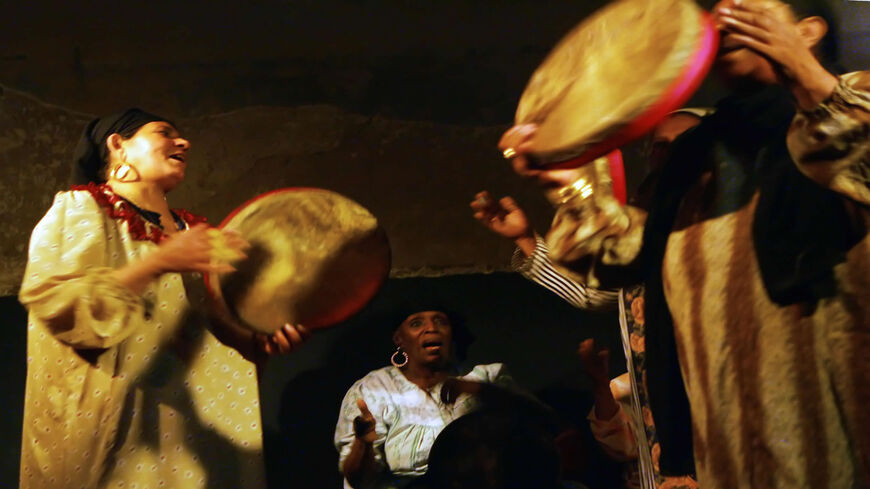 CAIRO — The woman standing in the middle of the chorus of men and women knew the impact her songs would have on the dozens of people sitting and watching in deep interest in front of her. She kept raising the tone of her voice gradually until it enveloped the whole place and filled it with awe. The songs contained a mix of religious and love lyrics, some of them totally incomprehensible to those listening. Nonetheless, the same lyrics were stupendous to the members of the audience who knew that they are part of a dying ritual called Zar.

Umm Sameh and her band Mazaher are on a mission to protect the dying Zar ritual.

"My colleagues and I want to protect this ritual because it is a heritage that is totally unknown to the new generation of Egyptians," Umm Sameh, 72, told Al-Monitor. "This is a very important issue because Zar is a folk art that has fans, but is also on the way to extinction."

Zar rituals were popular among different social classes, especially the poor, a long time ago. They are a type of medicinal ceremonies held for people deemed to be possessed by evil spirits, or those suffering mental or physical problems. These rituals formed an alternative medicine for Egyptians in the past, the origins of which are debated.

Some people believe Zar rituals were copied from the Horn of Africa, especially Ethiopia, having been introduced to Egyptians by traders from this region. A typical Zar ceremony would be held inside or outside the homes of patients.

The band would arrive in the early morning, bringing different instruments, especially percussion instruments such as tambourines, bongo drums and congas. The ceremony would start with the leader of the band, a woman in most cases, spraying the patient with incense, believed to have a cleansing effect.

The members of the band would then form a circle around the patient and start playing their instruments and singing. The clothes the patient wears would depend on the type of spirit they are possessed by. The pitch of the singing would rise gradually and the patient would dance with ecstasy, sometimes losing their consciousness and falling on the ground.

A huge number of Egyptian drama and cinema works capture scenes like this one. Most of the patients in these scenes are women, some of them using the Zar ceremonies to find spiritual solutions to social problems, including divorce or the loss of a husband or lover.

The ceremonies continue to live on, mostly on TV screens. In real life, Zar rituals are dying.

Umm Sameh learned Zar ceremony singing from her mother who had her own Zar band, too. When her mother no longer performed, she substituted her as a leader of the band, with the aim of earning a living. Umm Sameh and her band perform the ceremonies now at the Egyptian Center for Culture and Arts in downtown Cairo in order to protect this dying art form.

"The number of people holding Zar ceremonies is decreasing fast," Umm Sameh said. "This art was exposed to massive defamation in the past and this accounts to the small number of ceremonies held across Egypt these days."

Nonetheless, interest in this art among the members of the new generation seems to be alive, with a large number of people showing up every week at the center where Umm Sameh and her band perform.

Most of those above 40 would remember the time when they peeked inside tents set up on the streets to hold Zar ceremonies. Inside the tents, bands like Mazaher would sing and beat on their drums and women would dance in a trance and liturgically shake their bodies to kick out evil spirits.

Zar ceremonies used to give insights into the way Egyptians, especially women, thought, amid widespread belief in evil spirits and spiritual healing, as opposed to traditional medicine in the hospitals and medical centers.

Some people attribute the gradual disappearance of the ceremonies to advances in science and decreasing belief in possession by spirits.

"Folk arts in general and Zar, in particular, have disappeared from our streets," Ahmed al-Maghrabi, director of the Egyptian Center for Culture and Arts, told Al-Monitor. "Current generations of Egyptians tend to look down upon folk arts."

He blames what he described as "technological and economic transformations" and globalization for the death of precious arts, including Zar.

Campaigning by the religious establishment seems to have also had an effect on the prospects of the Zar ritual among Egyptians. Egypt's religious authority equates Zar ceremonies with heresy, considering them a "sacrilege" that hides behind its lack of faith in God. It says those holding the ceremonies make patients believe that they can cure them, using incomprehensive lyrics in parties where men and women mix in an inappropriate manner.

In most drama works, Zar ceremonies are associated with robbing naive rich people out of money by making them believe that the ceremonies would help them get rid of their problems.

Nevertheless, Umm Sameh and her band have morphed the ritual into an art form and into a part of Egypt's cultural heritage that has to be preserved for future generations, before its total demise or disappearance. Mazaher is one of the few remaining bands that perform Zar rituals in the country.

It is also one of few remaining bands that are familiar with the secrets of the rituals, and the lyrics and the songs used in them. Mazaher performs around the world and has recently returned from a European tour that took its members to Spain, Portugal, the Netherlands, Denmark, and Sweden.

Umm Sameh recognized the potential of Zar music and dances when she and her mother could not cope with the requests they received for ceremonies all over the country.

This was a time, she said when people believed in the healing effect of the ceremonies and the music.

"People in the past believed more in the healing effect of Zar ceremonies," Umm Sameh concluded. "People used to come to me and my mother at the end to tell us that the ceremony had cured them."