Dabke troupes dance on in Gaza

Traditional dance groups are the pride of Palestinians, and unemployed young people in the Gaza Strip are joining these groups to make a living. 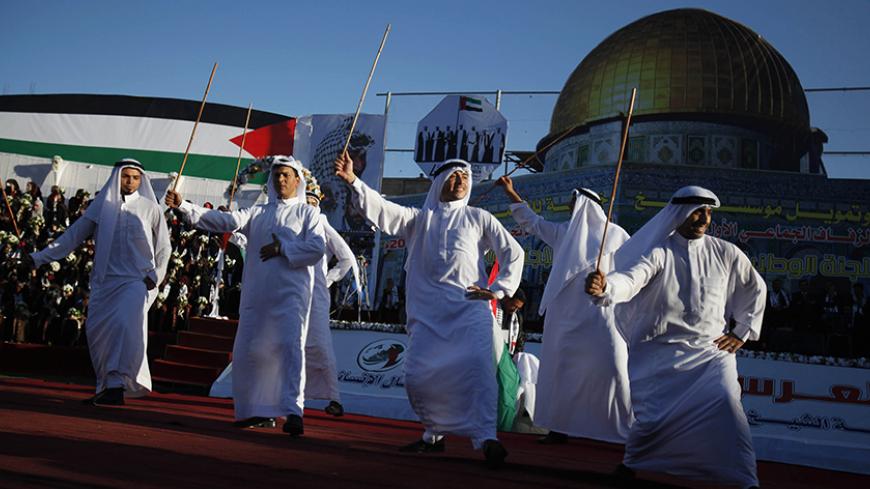 Palestinians perform a traditional dance during a mass wedding for 250 couples in Rafah, in the southern Gaza Strip, Dec. 19, 2012. - REUTERS/Ibraheem Abu Mustafa

GAZA CITY, Gaza Strip — Every Palestinian wedding in the Gaza Strip is characterized by the folk art of fadous bands, which are male-only groups that perform at wedding ceremonies and whose members play drums and sing traditional songs while marching. Hundreds of unemployed young men are joining these bands to break free from idleness and poverty.

Nasser al-Yafawi, an expert in Palestinian history and heritage, told Al-Monitor, “These bands are named after the Palestinian Fadous family, which formed the first band hundreds of years ago. It reflects a Turkish tradition that was introduced to Gaza during the Ottoman era [1516-1924].”

Yafawi, who is the secretary-general of the Arab Intellectuals’ Initiative in Gaza, noted that fadous bands revisit old popular songs, while also performing new songs, depending on the requests of the bride and groom. The band members wear a red fez that is characteristic of the Ottoman era and a unique loose folkloric costume with a Palestinian kaffiyeh.

Mohannad Abu Zaher, 25, of Gaza City got married July 17 and had booked a fadous band to play at his wedding. Abu Zaher, who works in a furniture shop in Gaza, told Al-Monitor, “Fadous bands are an important part of our wedding ceremonies. Without them something would be missing. It reminds us of our old heritage; the musical rhythm gives us a feeling of Palestinian belonging.”

Mohammad Abu Hamda, the head of Zohoor, a fadous band in Gaza, told Al-Monitor, “As the bands’ work flourishes during the wedding season in summer, hundreds of young people have overcome unemployment and lack of job opportunities.” Abu Hamda said that his band is composed of 29 members who are all unemployed.

The latest World Bank report revealed that unemployment in Gaza is the highest in the world, reaching 43% by the end of 2014.

Abu Hamda said that his band can perform at four weddings in one night, as it is divided into four groups, and makes 800-1,200 shekels ($215-$320) per wedding per night. The price varies depending on the number of band members present, which is agreed upon in advance with the groom or the wedding planner.

In regard to the instruments used, Abu Hamda said, “The old fadous bands used primitive instruments such as an oriental drum made of animal skin and a flute made of bamboo. We are now using new types of drums, flutes, tambours, trumpets and Scottish pipes, as well as swords and torches for the different performances of the band.”

According to Yafawi, the tradition of fadous bands was mostly centered along the Palestinian coast, specifically in Jaffa. In 1948, it was transferred to the Gaza Strip when Palestinians left the city after the establishment of the Israeli state. He said that fadous bands would perform in wedding ceremonies for three to seven consecutive days at a family's or tribe’s premises. Today, the bands perform only a couple of hours on the wedding day.

Yafawi said that under Egyptian rule in Gaza (1948-1967), fadous bands disappeared in the Gaza Strip, as they were replaced by oriental music bands and belly dancers during wedding ceremonies. It wasn't until after the Israeli occupation of Gaza in 1967 that the fadous bands made a comeback.

“In 1993, after the Israeli occupation of Gaza and the beginning of the Palestinian Authority’s rule, fadous bands started performing at weddings again,” he said.

Folk dance or dabke troupes perform at a groom’s bachelor party, which usually takes place a day before the wedding, rather than at wedding parties.

Al-Monitor met with Farid Abu Khussa, director of a folk band called Abu Khussa Band, on the sidelines of a party at the Bureij refugee camp in central Gaza. He thought that our meeting was about booking his band for a party. He said, “I'm sorry, the band is booked for the next 20 days.” He smiled when he realized that it was a press interview.

Abu Khussa, 26, told Al-Monitor that his band was founded in 2013, and is composed of eight young male members of the same family who are all unemployed. Their love for folk music encouraged them to form the band, and they now earn as a group a minimum of 1,000 shekels ($265) per night, which they evenly distribute.

Rami Abu Khussa, 23, is Farid’s cousin and a member of the folk band. He graduated from the faculty of trade at the Islamic University of Gaza in 2014. The lack of job opportunities and labor market saturation prompted him to join the band in order to provide for himself and his seven siblings, since his father is unemployed.

Rami told Al-Monitor, “Hard work depletes one’s physical energy. As your feet hit the ground while dancing for four hours in a row, the muscles become very tired, which requires a long recovery. Yet what motivates us to work continuously is making people happy, and making money to feed our families.” He said that he earns about 140 shekels ($40) per day, including tips.

Gaza’s labor market offers few or no opportunities to the thousands of students who graduate each year, and according to a study published on April 24, 2013, by the Women’s Affairs Center in Gaza, there were 150,000 unemployed university graduates at that time.

Yafawi said that the Palestinian folk dance or dabke originates from the time when the Canaanites worshipped the gods by stamping their feet on the ground in a dance ritual. This type of dance developed throughout history into a type of line dance and became part of Palestinian heritage that is well-established in the northern and central parts of Palestine.

As these traditions and cultural arts enable young people in Gaza to overcome unemployment and build a career in this field, Palestinian society ought to preserve this heritage and folklore and keep the tradition alive.